I so, so wanted to love Hinds. I earnestly desired them to blow los calcetines off the world of rock and roll - not just for Madrid, not just for Spain, but for the benefit of the whole Spanish speaking world (400 million voices incidentally, making it the second most widely spoken language on the planet). I love the Spanish culture, its food and its beautiful linguistic fusion of Iberian and Celtic cultures.

Unfortunately not. Not yet, anyway. But perhaps we are expecting too much, too soon?

Hinds had started off promisingly enough in Madrid in 2011 as The Deers. Then, in January 2015, an un-named, but phonetically-and-similarly sounding, band from Canada cried "Foul!" (not, fowl) and forced them, via a writ, to re-name themselves. 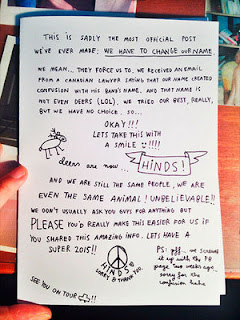 Whilst female deer are known as 'doe' ( as in Julie Andrews' immortal "doe, a  deer"), The Does certainly does, and would, cause certain problems as an alternative band moniker, even when a doe's a deer, a female deer. Re-naming themselves Hinds to distinguish themselves from the male deer, stags or harts, was a clever move. The name has both the punch and kick in quantities that these four Madrileñas could have only wished for, and would surely need.

And so to 2016, and the UK tour of Hinds, prior to setting off for the United States. The album, Leave Me Alone, is out, and we are three dates in as the band roll in to a cold and foggy Tuesday night at Norwich Arts Centre.

Opening act are New York band Public Access TV, not to be confused with J.Willgoose Esq. and his space-racing Public Service Broadcasting outfit. This four-piece, formed less than two years ago have already created quite a ripple on both sides of the pond, and over here have been picked up by Zane Lowe, NME and a couple of the broadsheets. To be honest they sound a bit too much like The Killers a bit too much of the time, but they play and sing with a spirit and a coolness that makes it all forgivable. The lead singer John Eatherley struts his stuff in squeaky clean sneakers, and looks like a biopic actor playing Mark Zuckerberg playing a rock star. The Ramones they ain't, but they have the confidence and the swagger to impress our Norwich crowd (even if they did call us Nor-wick). 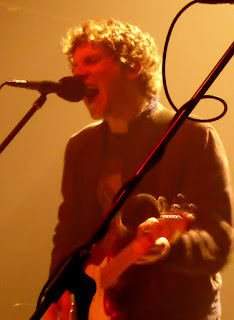 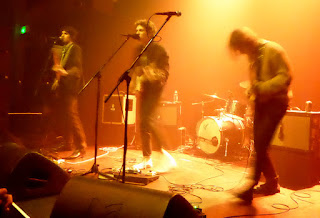 There's quite a boisterous male element in the audience tonight, so Hinds are guaranteed an enthusiastic welcome from the moment they walk on stage. Vocalist Ana Perrote senses the whiff of testosterone in the air and milks it from the start. Her coquettish smile and sexy wiggle of the hips has the young menfolk of Norwich in the palm of her hand from the opening bars of Warning With The Curling, and she knows it. 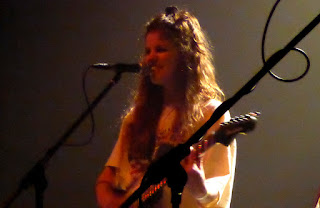 Unfortunately, to be real rock and roll superstars you also have to have the songs to back up the stage presence, and that is where Hinds perhaps let the side down. To be fair, they actually sound better live on stage than they do on the debut album, Leave Me Alone, and songs like Bamboo and Trippy Gum become glorious pop anthems when sung back by an enthusiastic audience, although the latter still steals that same riff from The Killers' I've Got Soul But I'm Not a Soldier. Fat Calmed Kiddos sounds like Cliff Richard's Living Doll and when, on Chili Town, Perrote sings "I'm flirting with this guy 'cause all your friends are shy" there are frissons of Arctic Monkeys lyricism from I Bet You Look Good On The Dance Floor, as well as having the effect of racking up the alpha-male sexual tension. 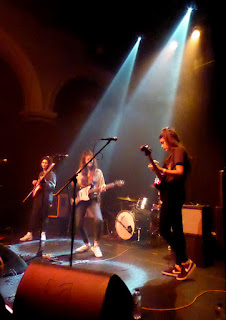 And, of course, that is what this entire set becomes. One enormous prolonged anthropological exercise in flirtation and sexual ritual. Girl smiles at boy. Boy struts and postures. Girl is impressed. Boy does more. To the point that these poor late-teenage/early twenty-something males are so pumped up by their own testicular secretions that they are bouncing over the safety barriers and having to be restrained by security. And the band is loving it!!! 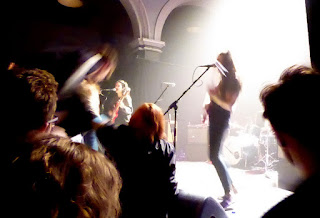 Certainly Hinds have all the ingredients (apart perhaps from their songs and their musical ability) to energise an entire army of conscriptable age at every gig they play this tour (It will be interesting to hear if they did actually make it down to The Mischief for after-party tequilas as they promised from the stage). For me they were wholly adequate entertainment for an après-ski party in the Sierra Nevada, or a teenage TV series - their music and their band-wagon is certainly far more Josie and The Pussycats than Savages. 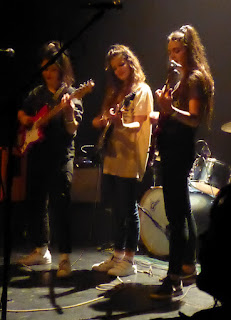 But, for a large part of the audience here tonight, they came, they played, and they conquered. And, for that, I salute them. 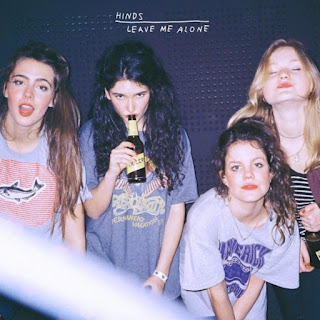