Low. And Behold. And, it's the final Sonic Youths Showcase of the Year 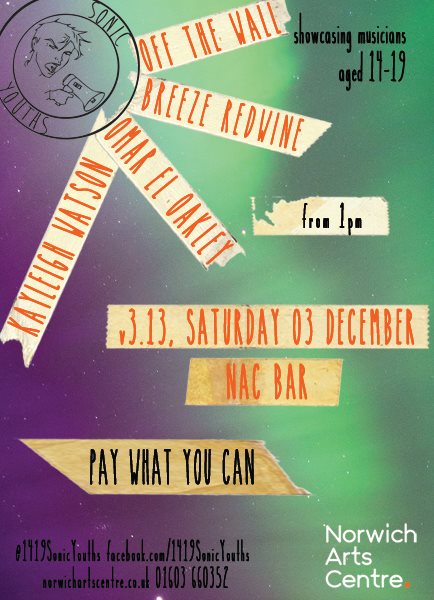 It has been a busy start to December. Goodness knows how people with jobs still find time to put up Christmas trees and go out buying Yuletide gifts for folk. I seem to have attended rather a lot of 'Classic Album' gigs of late. It started off with Sam Duckworth's new project Recreations and The Magnetic South performing his Get Cape, Wear Cape, Fly album 'Chronicles of a Bohemian Teenager' in its entirety at the Arts Centre. This was followed with similar performances of The Fratellis' 'Costello Music' at the Nick Rayns LCR, Terrorvision's 'Regular Urban Survivors', and Big Country's 'The Seer' (both at The Waterfront). And tonight I return to the LCR to watch Kular Shaker re-create their classic, 'K'. All of these albums are being toured to celebrate key anniversaries of their original release, ranging from 10 years for 'Chronicles of a Bohemian Teenager' to an amazing 30 years for 'The Seer'.

After so much 'classic' music (revived with varying degrees of success, and with varying percentages of original band line-ups), it was good to have some up and coming artists to sample, via the final Saturday lunchtime Sonic Youths Showcase of the year, in the café-bar at Norwich Arts Centre. If you include the various festival outings during the Summer, the 2nd Birthday Party show, and the appearance at Norwich Sound and Vision, that makes a total of thirteen Sonic Youth events curated this year by the legendary Annie Catwoman. But, before I pass on my events of Saturday lunchtime, let me just say a few words about Minnesota band Low's return to the Arts Centre earlier in the week. 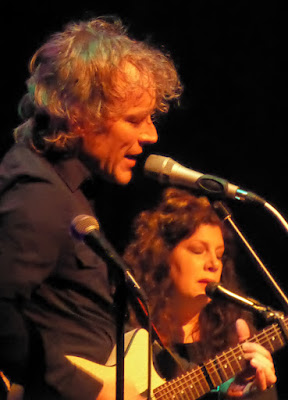 Once again I am forced to put up my hand and admit to being relatively unfamiliar with the work of husband and wife team Alan Sparhawk and Mimi Parker and their band. Formed in 1993, and gaining attention for their striking vocal harmonies, downbeat tempos and minimalist arrangements, Low have released a total of twelve studio albums. But it is their 1999 Christmas EP, an eight track mix of carols, seasonal classics and original songs that seems to have taken a place in the fans' hearts. At the time, even the NME called it "quite possibly the best Christmas album in the world… ever".

Low's Christmas shows appear to have become something of a tradition here at Norwich Arts Centre, and this year's visit has been sold out for months in advance. Together with Steve Garrington on bass and keyboards, and with opening support Erik Koskinen guesting on slide guitar, Alan and Mimi certainly worked their magic on tonight's audience. From where I was watching, there was an almost devotional air, bordering on pietistic reverence. Personally, being a fairly non-religious person, I found some of this slightly intense, to the point of deflecting my attention from the actual performance. The second half of the show, though, featured a selection of less spiritually doctrinal material, leaving me able to fully appreciate Low's vocals and musicianship. However, some of those present later wrote with high praise indeed, one describing it as 'possibly their best NAC gig ever'. Horses for courses, I guess. 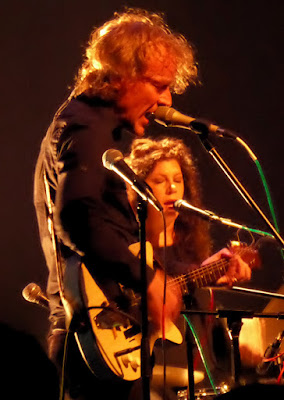 Still, whatever you may have thought of Low's 'A Christmas Show' it was infinitely more welcome than the orgy of commercialism and spending that is about to engulf us as the 25th approaches. After the city centre's illuminations ignition celebrations, complete with Ed Balls, fireworks and with Disney-style imagery projected onto public buildings, the feeding frenzy is certainly now in full swing. On Saturday, Mustard TV got in on the act, taking over Millennium Plain for a Christmas Party event, and even the Christmas Coca Cola lorry is being invited to park up outside The Forum on Friday 9th. Remaining suitably impassive, I made my way through The Lanes to St Benedicts Street, and the Norwich Arts Centre.

Three acts were introduced to us, singer songwriter Kayleigh Watson from Wymondham, jazz keyboards from Norwich-based Omar El Oakley, and a four piece rock band, Off The Wall, from Colchester. And all, crucially, fitting Sonic Youth's criteria of being musicians aged between 14 and 19. (The fourth artist due to appear, Breeze Redwine, was unable to perform due to other committments). 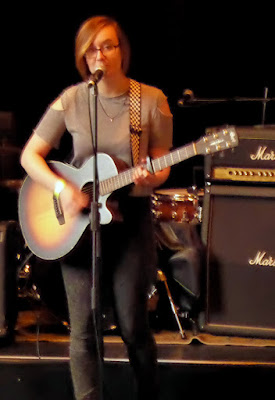 Kayleigh Watson was handed the baton to open the session, and did it with total aplomb. I had not heard her sing before, other than via her Soundcloud page, but was mightily impressed. Looking comfortable and at ease, she confidently introduced each of her chosen self-penned compositions, personal songs about love and honesty, and a moving one about her late grandmother. The voice is clear, strong and with a distinctive timbre. The melodies are well constructed, and the overall effect is sit-up-and-take-note attention grabbing. Look out for her name on future gig listings in and around Norwich. 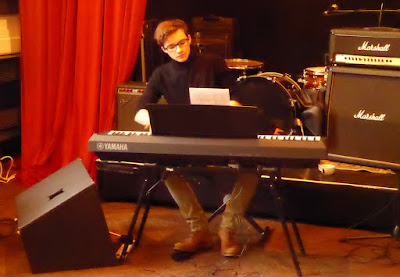 The charismatically named Omar El Oakley is a keyboard player with a beautiful line in blues-infused jazz compositions. Classically trained, and sometimes known to record as his alter-ego Gary Mozart, this afternoon he is Omar, sitting behind his Yamaha keyboard and letting his improvised jazz vibe fill the café-bar area. Dressed casually in black roll-neck sweater, and with a sixties Jacques Brel hairstyle, Omar would not be out of place in a cellar jazz club on the left bank of the Seine, let alone an Arts Centre in the Norwich Lanes. He is not given a microphone, so some of his introductions do have to compete against the noise from the coffee maker, and I would have loved to hear him play the Art Centre's baby grand instead of an electric keyboard, but he is undoubtedly another local talent that we need to watch out for. 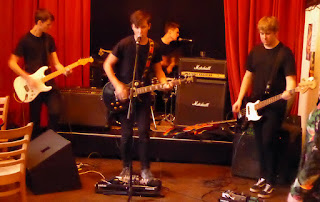 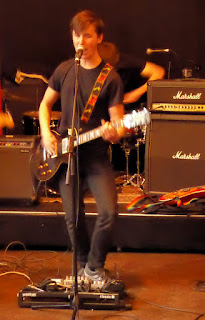 Last up, and providing yet another seismic shift in mood and style, is Colchester based Off The Wall, who despite their age have already been together since 2009. They have played regularly at Colchester's Waiting Room venue, as well as at The John Peel Centre and at Landslide Festival. Even though guitarist Albert Wallace left Colchester in the Autumn to start university the band are still together, and still performing when they can. Front man and lead vocalist Fin Clark has great stage presence and a really strong voice that is capable of making an impression above Adam Looker's energetic drumming, and alongside Sam Warner's bass and Wallace's guitar. Although they refer to themselves as an 'indie-rock' outfit, and there are some modern influences in there, including Arctic Monkeys, what impresses an old timer like myself is the 'classic' rock sound that they also seem to bring to the table. There are opening shots of Motorhead with their first song, and some early Zeppelin blues riffs creeping into their single release 'Marvel Superhero'. Thanks to Annie for finding these boys, and bringing them to Norwich.

And that is it for 2016 as far as Sonic Youths are concerned, although the net has already been cast for those interested in performing at the next showcase. Get your demos into Annie by January 7th for the next scheduled showcase on February 11th. 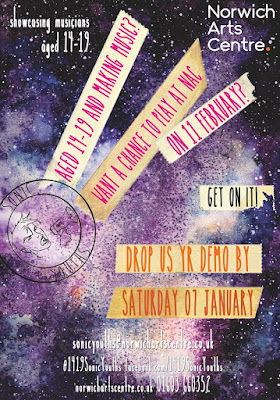