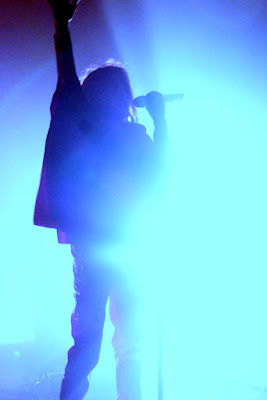 OK. It is hard to be objective when reviewing one of your all-time favourite bands. You desperately want so much for the gig / new album to be everything and more that you have hoped for. The anticipation builds, until the fear of disappointment and anti-climax begins to gnaw away at your soul. It's a bit like that huge pile of Christmas presents from your childhood that looked so inviting wrapped in the seasonal paper, ribbons and bows, but that somehow felt much less exciting once fully revealed and neatly piled up in your corner of the lounge. Hell, that makes me sound so ungrateful - like a spoiled brat from a comfortable home, with doting parents that obviously doted on me. But I'm just being honest.

When I last saw Goldfrapp it was an epic gig at the Royal Albert Hall in November 2014, the final live show following the release of the intensely monochromatic and emotional 'Tales of Us' album. Backed by the London Contemporary Orchestra, and featuring a guest appearance from John Grant, this was an elegant evening of beautiful songs, but lacked the fast-tempo synth-heavy electro hits capable of shaking a sedentary audience out of their comfortable seats and get them wanting to dance. At the end, Alison Goldfrapp announced that this was the last gig 'for a very long time'. Was this a coded message that, after six albums and a fifteen year partnership, she and synthesiser maestro Will Gregory were calling it a day?

Late last year teaser posts on the band's Facebook page hinted that new material was on the way. Images of the volcanic landscapes of Fuerteventura appeared, and finally in February the video for new song Anymore was dropped. It heralded a partial return to the days of Supernature and Black Cherry, but with throbbing synth beats and a fresh elemental sound that brought the formula bang up to date.

The new album, Silver Eye, is not released until March 31st, so for the capacity crowd at Cambridge Junction tonight would be the first chance to hear this new material live or otherwise. It is the second of three of warm-up gigs that kicked off the previous night in Oxford and then moves on to Sheffield ahead of a full show at London Roundhouse on March 27th.

There is no support act tonight, so this is a warm-up performance without a warm-up. Last minute adjustments to the drum kit seem to go on for ages, and even the tour manager begins to show signs of concern. But, after a delay of only about five minutes, the band take up their places followed a few seconds later by Alison Goldfrapp herself. As if to underline the metamorphosis inherent as a running theme in Silver Eye the set starts off with the two showstoppers that are often saved for much later - the operatic and breathtaking Utopia and Lovely Head from the debut album Felt Mountain. These are swiftly followed by the familiar driving beat of Black Cherry's Train before being introduced to Anymore, the first of seven tracks featured tonight off the new album.

The stage is mostly backlit, often with rich shades of red that augment Alison's choice of red cape and PVC trousers. It creates a scene that suggests volcanic fire, Faustian imagery and yet a touch of Red Riding Hood. The pre-show announcement requesting no flash photography, and the almost continuous shadowing of Alison Goldfrapp's face by the lights suggests that she may not yet be quite ready to fully reveal the transformation from blonde femme-fatale to raven-haired siren, though the view from the front row reveals a classic metamorphosis akin to the Gallic beauty of Isabelle Huppert. 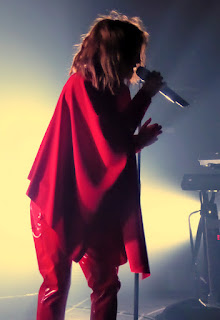 But it is the music that we should really be commenting on, and in between the indulgence of faves like Dreaming, Number One and Slide In, we concentrate on new tracks like Ocean, Moon In Your Mouth and Ocean. The live performances may not yet be perfect, and the give-away glances of affirmation between band members during and between songs remind that this is a road test for them almost as much as it is for us, but Goldfrapp fans really are in for a treat when the new album drops at the end of the month. Think Supernature, but update it, apply contemporary relevances and a primeval appreciation of elemental forces, and you come close to describing Silver Eye. Gone is the pastoral and literal beauty of Tales Of Us, and in its place comes the return of the synth-driven melodic impressionists.

Ride A White Horse provides a suitably climactic finale before a stomping encore that teasingly saves Ooh La La and Strict Machine for after Black Cherry and the mid-tempo disco beat of Shiny and Warm. And warmed up we certainly are. 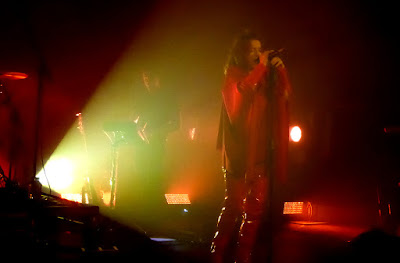 Still a shame that Will Gregory chooses to stay at home these days rather than play on the live dates. I had hoped that after his appearance at the Royal Albert Hall he might re-consider his stance on touring, but it appears not to be the case. He is busy on other projects, which include his Moog Ensemble, and recently curated work on musical modernism for Radio 3 and Hull's City of Culture programme.

Goldfrapp now have a busy year ahead promoting Silver Eye and playing festivals around the world - one of which is our own Latitude at Henham Park on July 13th. I'll see you there.