Youngblood Brass Band - Killing Me Softly with a Sousaphone 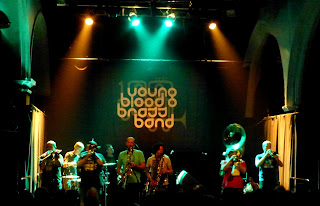 I have always had a soft spot for brass bands ever since Tara Fitzgerald picked up her trumpet and played 'Orange Juice' with on-screen ex Ewan McGregor in 'Brassed Off'. I had a bit of a wobbly when the Hanwell Band teamed up with Terry Wogan for that infamous version of 'The Floral Dance', but got over it and added CD's to my collection from the excellent Canadian Brass and our very own Grimethorpe Colliery Band. Them were the days. Men down pit, showering at end of shift, then playing brass in spare time. Margaret Thatcher soon sorted that one out.

Never in my wildest dreams did I imagine that a brass band could combine my guilty pleasure of brass arrangements with a contemporary twist on punk, jazz and hip-hop. Enter 'The Youngblood Brass Band', self-styled masters of 'Riot Jazz' from Oregon, USA.

Apparently they played here at the Norwich Arts Centre eight years ago in 2007, twleve years after getting it together as a group of students at Oregon High School. Amazingly, as they take the stage tonight, the vast majority are still from that original lineup.

After six album releases ( seven if you include 'Better Recognize' which was released under their original moniker of 'One Lard Biskit Brass Band'), and twenty years of their touring as a band, tonight is my night to become 'Youngblooded'.

It is an imposing lineup that amasses on the modest stage at Norwich Art Centre - trumpets (x2), saxophones (x2), trombones (x2), sousaphone (x1) and percussion/drums (x3) One of the drummers, David Henzie-Skogen doubles up as vocalist / rapper, and introduces all the songs. That's ten in total. In a tour bus. On tour. From the US of A. Playing to a sold out venue capacity of 260. Do the maths.

Not my problem. I'm a music lover, not an economist. But it does explain why the merchandise was mentioned so many times during the set. We were all encouraged just to buy a poster to help prevent the band from starving. On a more positive note, it was unusual, yet pleasing, to see sheet music arrangements on sale amongst the CD's and T-shirts. The Youngbloods have always encouraged participation in school bands, and will often perform workshops and masterclasses for young musicians. Even tonight's support act, local favourites Killamonjambo, were quick to acknowledge the influence that the group had on them after seeing them perform in Norwich in 2007.

Starting with a cover of Chaka Khan's 'Ain't Nobody', The Youngblood Brass Band go on to rip their way through an incredible set of numbers, each sounding better than the last. The playing, the arrangements and the sound balance is all superb, and we are dancing from the off. It is hard to give justice in words to the atmosphere of a Youngbloods gig. Yes, it was a hot night and a packed stage in the Norwich Arts Centre, and the packed auditorium were rammed right up against the monitors, grooving, clapping and waving arms in the air, and that type of ambience always guarantees a good night. But when you add such a high level of musicality and passion, then you have all the ingredients for something quite special. During instrumental numbers the band sweated and we danced. When Henzie-Skogen comes forward to deliver lead vocals the vibe changes towards a  fusion that can be reverentially described as James Last meets The Beastie Boys, or Sergio Mendes meets Eminem. This is certainly not a novelty clash of musical genres à la Floral Dance, but a full-on authentic mix of hip-hop, punk, rap and jazz - a brazen masterpiece of  how to 'get-on-down' with a sousophone and a trombone.

By the time the encore came around we had all danced ourselves silly and experienced one of the best nights out in ages. It was left to the band to play out an encore of their version of Roberta Flack's 'Killing Me Softly With His Song' before checking out the merch stand. My God, these guys deserve to eat!

And if you ever get a chance to see Youngblood Brass Band live, go! I promise, you will not be 'Brassed Off'.

Check out the Youngblood Brass Band's website at http://www.youngbloodbrassband.com/ to find out details of upcoming gigs, and details of all music releases, including the latest CD 'Pax Volumi'. 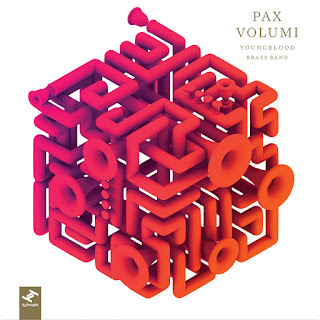