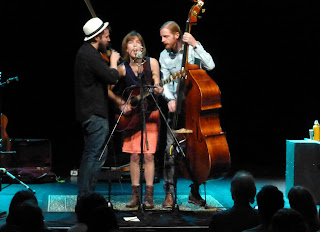 Fresh from their huge success at this year's Cambridge Folk Festival, where they performed three sets to wildly enthusiastic crowds, it was no surprise to find that The Stray Birds' visit to Norwich Arts Centre was a sell out, with all seats taken and standing room only at the back. This Pensylvanian trio have released two albums and an EP since their formation in 2010, and are still a new name to many UK fans of Americana, Bluegrass and Folk. However, the fact that a number of tonight's ticket holders were also at Cambridge shows that they are developing a loyal fanbase as well as rapidly winning over new audiences.

There is no support for tonight's show, so instead we are treated to a double set, or as Alan Hanson would say 'a game of two halves'. This allows for a relaxed pace, plenty of laconic chit-chat between songs, and a chance to meet fans in the bar during the interval as well as after the encore.

For those, like myself, who have not seen The Stray Birds before, there are a couple of things that become immediately obvious, and the first is that they are not all birds. The trio consists of Maya de Vitry on fiddle and guitar, alongside Charlie Muench (with whom she played in middle school orchestra) on double bass, and Oliver Craven (with whom Charlie played in a bluegrass band before meeting Maya), also on fiddle and guitar. The second thing is that the stage is arranged with just a single condenser microphone for vocals. Regardless of who is singing lead (and there is a lot of swapping and shuffling of position for this throughout the evening), the harmonies, and also Oliver's guitar picking on the resonator, are balanced not by the sound desk but by their proximity to the microphone. Anyone who saw the fictional Soggy Bottomed Boys singing in the Coen brothers film 'O Brother Where Art Thou?' will immediately get the picture, and also an idea of one strand of The Stray Birds style of playing. But their style also encompasses elements of jazz, swing folk and blues, with each genre infused with beautiful three-part harmonies and cloes-matched arrangements. This is singing and playing by three individual musicians who know each other's style and thought processes inside out.

It has to be said that I only recognised a couple of tracks from the evening, both from the latest album. They opened the first set with the lively 'Adelaide' and closed it with the title track 'Best Medicine'. In the second half there were more self-penned songs, but also a couple of covers. Almost by way of an apology it was explained that 'I Wish It Would Rain' was written by Nanci Griffiths in Texas, and did not refer to an English summer. Later, the Jimmie Rodgers classic 'Blue Yodel #7' gives Charlie a chance to show off some vocal gymnastics. What is impressive with The Stray Birds setlist is how well the covers blend into their own compositions, the transition is almost seamless - a credit to the authenticity of their songwriting as much as it is the contemporisation of the covers.

Understandably, after encouraging us to tip up our folding chairs and dance a two-step in the aisles to 'Sabrina', and to whoop after every reference to having 'got a little busy in the bedroom', an encore was inevitable, and duly given. In an impressive feat of Appalachian cross-tuned fiddling, Maya and Oliver lead us through three final tunes - 'Give A Wildman a Life', 'Bellows Falls', and 'Waitin' On A Hannah', with Charlie bowing the double bass to the slower second number.

With another five UK dates before heading off to Europe The Stray Birds are set to increase their fanbase even further before returning to Pensylvania. I, for one, have already added both albums to my wish-list, and look forward to seeing them return again to Norwich Arts Centre.

To learn more about The Stray Birds check out their website at http://www.thestraybirds.com/home

The latest album 'Best Medicine' is currently available to download from i-Tunes at the bargain price of £4.99, where the eponymous debut album, and the 'Borderlands' EP are also available.