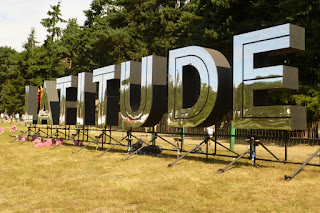 This was my eighth Latitude, and although I missed the first two I have still witnessed the steady growth in size and status of East Anglia's premier music festival. Despite loyally returning annually since that first visit in 2008, by last year I was beginning to feel that it had started to lose a lot of its 'wow' factor, perhaps through over-familiarity. Perhaps, like a lot of relationships, Latitude and I had developed something of a seven year itch. To be honest, the four days in Henham Park had started to become something of a routine, albeit a familiar and still enjoyable routine. 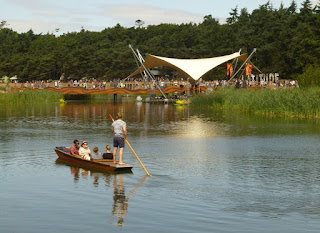 This year was heralded as a celebration of ten years of Latitude, and as such we were promised some surprises and changes. To be honest, the advance announcements did not seem to offer anything particularly earth-shattering in terms of line-up. Headlining the Obelisk Arena on Friday would be Alt-J, making it their third appearance at Latitude in four years. Portishead on Saturday was an exciting prospect for me, having never had the chance to see them perform live before, but three albums in 21 years hardly makes them relevant to anyone under thirty. Having never seen a Gallagher brother play live, and despite having followed Oasis since the days of Definitely Maybe, I was in two minds about Noel's High Flying Birds. Like a lot of fans, I really wanted to hear Wonderwall and Champagne Supernova more than I did a bunch of new songs, and there was no guarantee of that, any more than there was a chance of Melvin Benn persuading Liam to bury the hatchet and appear alongside his brother just to make the tenth Latitude more special. 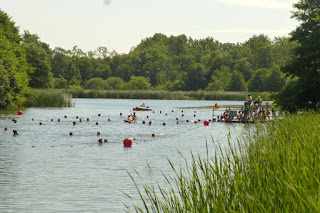 Still, buy a ticket I did (paid for in cash through the Norwich Arts Centre, thereby avoiding all those booking fees, transaction charges and postage costs meaning that you only pay the face value of the ticket), and took the familiar 45 minute journey from just South of Norwich, via Beccles, to Henham.

One thing that has got progressively better each year is the signposting and stewarding on arrival. In the early days the advertised time of opening on the Thursday afternoon would frustratingly arrive and pass with queues snaking back from the campsite entrances whilst final health and safety checks were still being completed. Similarly, entrance to the arena was often tardy with security checks aggravating the bottlenecks, meaning that some performers were starting before the crowds had even managed to get in. This year, I was through the wristband exchange without any delay despite timing my arrival to coincide with the gates first opening, and breezed through the arena security checks each day without missing any of the first acts. 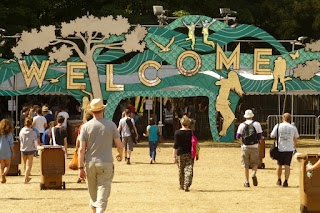 And it was nice to see that, after ten years, a bit of money had finally been spent on some new signage - the 'Latitude' lettering by the lake had been upgraded with some bright new shiny versions, as had the 'Welcome' fascia as we entered the arena, although the high-tech indudstrial metallic material (similar to the stuff currently being used to re-clad Birmingham's New Street railway station) seems slightly at odds with Latitude's rural and eco-friendly credentials. Whilst the BBC Radio 6 Arena's familiar blue and yellow striped big-top was back, and the I-Arena and Lake and Waterfront stages all looked exactly the same, we had a big brand new Obelisk Arena, complete with confusingly arranged Laititude lettering either side of the main stage. A stroll along the newly created 'Ollie's Walk' took us along the west bank of the lake, past the new swimming access, to a new structure, the corrugated iron and wooden 'Other Voices' stage. Resembling a cross between a chapel and a village hall, this small intimate venue was scheduled to host a programme of  from Young Fathers to The Unthanks. 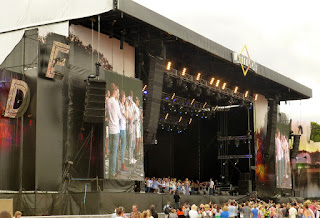 Having got slightly disorientated by coming through the Stables Gate entrance instead of the more usual Tuttles Wood Gate, I ended up pitching the tent in a different spot to previous years. As I have got older, I have moved away from the noisier 'yellow' camping and now take up residence in the slightly calmer environs of  the 'red' areas, and this year ended up strategically equi-distant from the toilet blocks and the noodle van. The lighting from one of the nearby watchtowers also meant that I would not need to worry about fumbling around for torches in the middle of the night. 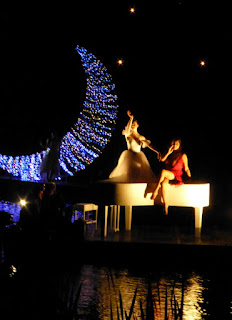 As well as being a day for arrival, Thursday is also a day for exploring the village, finding out who is giving away free samples (last year's McVities cereal bars almost meant that I did not need to buy any food), and hopefully finding some evening entertainment. In the past this has been a bit hit and miss - last year we had the amazing White Mink hosting in the Film and Music Arena, another year we had Nigel Kennedy on the Lake Stage, and one infamous year we had Tom Jones in the woods at midnight. This year was a chance to catch a spellbinding performance of 'Titanium', a mix of flamaenco, breakdance and hip-hop hosted by Sadlers Wells on the Waterfront Stage, followed by a floating spectacle, 'Un Mondo Pieno Di Sogni' (literally, 'A World Full of Dreams'), especially created by Studio Festi to commemorate Latitude's 10th birthday. To a classical soundtrack, performers are floated down the lake in dream-like costumes - giant ball-gowns, ballet dancers and an illuminated seahorse drift up and down the lake on motorised rafts to ethereal effect. As the performance ends a giant firework display erupts from behind the Obelisk Arena. 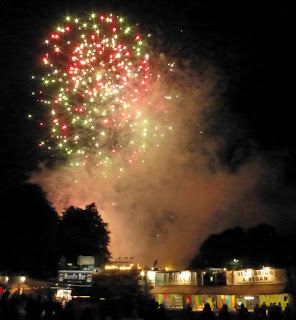 Passing on the chance to dance in the woods until 3am, I opt instead to conserve energy for the three days of music ahead of me. I have to be realistic. It is not just Latitude that is ten years older this year.

As predicted, the weather over the next three days was absolutely glorious, and instead of mud the arenas were transformed into a blanket of dust and fine straw that rose in clouds as we danced, and coated us with a fine layer that only a daily shower (or a swim in the lake) would ever fully remove. A lie down or a rest on the grass meant a five minute dust-down afterwards to remove the tell-tale dried vegetation from our clothes. This certainly helped to avoid the mass migration of picnic blankets and folding chairs into the Radio 6 big-top arena that happened in previous years everytime a cloudburst threatened, and meant that the Obelisk acts had a respectable audience right from the off. It also meant that more people were able to cram into the big-top for the most popular acts, and able to form giant moshpits for bands like Savages, Wolf Alice, and The Vaccines. 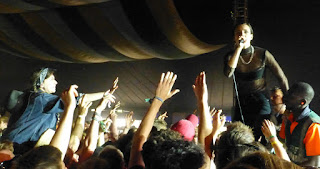 Personally, it seemed like a weekend of constant flitting between stages, catching half a set of a lot of bands that I half-wanted to see, having to be brutal in ignoring those that I had seen recently before, and prioritising those from overseas that I perhaps would not get a chance to see again in the UK for some time. There were, as always is the case at festivals, some regrettable clashes, meaning that I had to choose between Laura Marling and Jane Weaver, Warpaint and Years & Years, and Kwabs and The Boomtown Rats, and once again I failed to realise my ambition of visiting some of the other non-music stages.

New (to me) acts that impressed included 21 year old soul and pop chanteuse Izzy Bizu, Melbourne based punk-poppers King Gizzard & the Lizard Wizard, Pensylvanian rock'n'rollers The Districts, and Scottish psychedelians Neon Waltz. Also promising on the Lake Stage  were Georgia and French singer Petite Mellor, although long delays setting up the sound for both meant that each had their set times cut back significantly. 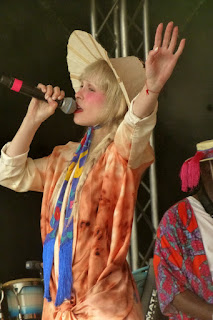 Acts that I had wanted to see, and exceeded expectations, were Savages, Wolf Alice, Young Fathers, and Manic Street Preachers. Those that slightly disappointed included Summer Camp, Warpaint, Alt-J, Tom Robinson, and King Creosote. What I saw of Badly Drawn Boy seemed reasonable, although he apparently went off on one towards the end of his set. Laura Marling was lovely, although seemed so far away alone on the Obelisk stage, and I had to leave early to claim my spot to see Savages. Nitin Sawney was magical, and his trio of female singers absolutely matched his guitar and the tabla to hypnotic effect. 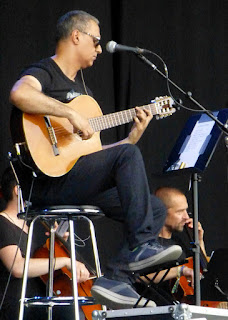 Public Service Broadcasting failed to use their unique-selling-point to full effect in the big-top, choosing to only show accompanying visuals on a small screen at the back of the stage rather than project them onto the two large screens either side of the stage. They also failed to play most of their latest opus 'The Race for Space', choosing instead to mix in tracks from previous releases The War Room, Night Mail and Inform-Educate-Entertain. A missed opportunity to impress cohesively, perhaps? 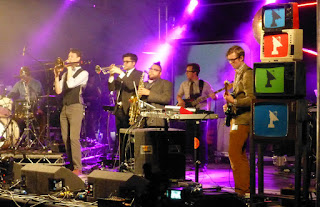 Sunday on the Obelisk Arena was spoiled for me by the take-over of reality television. Not only did we have to settle for a second-best 'lunchtime spot' with the appearance of Gareth Malone and his Voices choir, but later on Edith Bowman took over for the final of something called Guitar Star, which I believe is some kind of musical talent show on Sky Arts? Sorry Latitude, but this is unforgivable dumbing down. If you want to book a choir, bring back the Kolacny Brothers and Scala, but better still put Ed Sheeran and Thom Yorke up there where we can all see them, rather than smuggling them into the woods in the early hours to perform unannounced to the lucky few.

As this was the first time in eight years that I had actually watched all three Obelisk headliners, I guess that Latitude did, overall, come up with the goods, although Alt-J is still not exactly my cup of tea. However, Beth Gibbons' voice is something else, even after 21 years, and Portishead really did make the hairs on the back of my neck stand up on end. 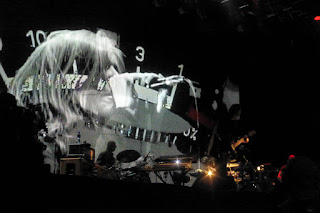 Noel obliged us with some Oasis classics, and the obligatory barbs at Latitude's perceived audience of mainly middle-class, Guardian-reading, Waitrose-shopping, middle-aged hippies. He also accused us all of being animal-murdering farmers at one point, although he tried to turn this into a compliment, thanking us for continuing to provide him with a 'nice piece of meat'. I suspect his tirades are all well-scripted and designed not to further scupper his own working-class credentials, and a little glimmer in his eye suggested that we were not to take it too seriously. After all, as he pointed out, the royalties for 'Wonderwall' will continue to ensure that his kids will not go hungry for a while yet. 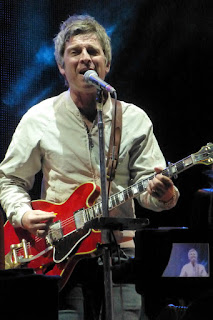 So, ten years on and what is the verdict? Well, Latitude is certainly convenient to get to if, like me, you live in Norwich. It certainly provides three packed days of music, including some big names, along with some pleasant surprises. Has it improved over the ten years? Undoubtedly, although this 10th anniversary edition still did not pull a name out of the hat to compete with Radio 1's Big Weekend earlier this year in Earlham Park. I guess Muse, Taylor Swift and the Foo Fighters were a big triple-act to follow, and may have proved ultimately to have pissed on Melvin Benn's parade. Nevertheless, on a gloriously hot July weekend, in the words of Clean Bandit, there's still probably 'no place I'd rather be'. 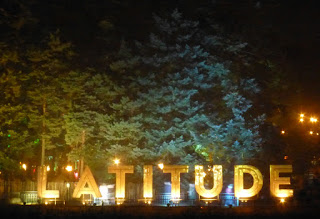