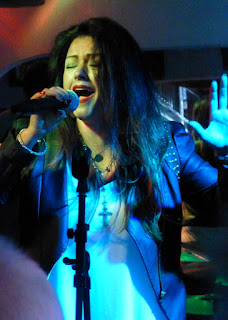 I decided to take a bit of a walk on the wild side on Sunday afternoon. Despite having lived in Norwich for over thirty years I had never entered the small passageway that leads off Gentlemans Walk between Lloyds Bank and H.Samuel the jewellers. I had been warned that to stray up there could potentially lead to a life of slot machine addiction, and the thought of becoming reliant on the proceeds of petty crime in order to feed a small room full of one-armed bandit machines had never very much appealed. What I had not realised was that, if I made it past the amusement arcade a delightful pub called the Walnut Tree Shades awaited. And if I didn't want to run the gauntlet of marauding gamblers and their bags of twenty pence coins, I could even approach instead by skirting round into Castle Street and entering via Old Post Office Court (for that is what it is called), between Body Shop and Optical Revolution. Either way, thirty years was too long a time to not have a pint in a pub so close to all the city centre amenities. 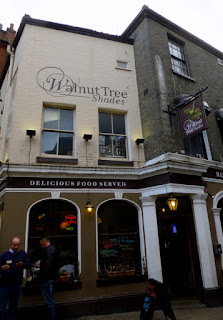 This American-styled retro diner and watering hole offers a good value food menu upstairs that currently offers two main courses for £10, yet still retains a lot of the charm downstairs drawing from its Victorian past but updated with music and sports based memorabilia on the walls, a jukebox, and a useful range of beers. But the main thing that drew me here last Sunday afternoon was a rare Norwich appearance by celebrated local jazz blues singer songwriter Malaya Blue.

With her exotic name, sultry good looks and powerful stunning voice, Malaya Blue has created more than a ripple in the blues world since her self-released album 'Bourbon Street' came out last year. The last twelve months have seen her and her band travelling the country, including appearances at the Jazz Cafe in Camden and London's 100 Club. Unfortunately for me this has meant fewer appearances in Norwich so, despite being tipped the wink about her last summer it has taken me until now to actually hear her sing.

It is a tightly packed Walnut Tree Shades that welcomes Malaya Blue to the microphone stand and whilst it would be lovely to stand close to the band, the regulars and loyal supporters have bagged the best spots leading the three of us to find seats at a table further back. Whilst we may not have a front row view we still get the full meal deal when the band starts to play. This afternoon's lineup includes guitar, bass, drums, keyboards and sax, and the sound is set up just right to allow the vocals to carry right through the Shades' bar, yet still allow the instrumental solos to receive full appreciation. The band are tight, and whilst creating an authentic bluesy vibe their are still familiar influences peppered throughout, including occasional tell-tale snatches of The Animals' sixties-style keyboards and an 'Us and Them' inspired sax solo reminiscent of Pink Floyd's 'Dark Side of the Moon'.

Malaya's voice rises seamlessly through subtle and mellow right up to a chandelier shaking rambunctiousness when she turns up the volume, yet the control and precision never allows a duff note to sneak past. The timbre is cleaner and more clinical than some of the legendary rock blues greats like Maggie Bell and Janis Joplin. At times their is a hint of country sneaking in à la Bonnie Raitt, but individuality shines through as she delivers one self-penned number after another, introducing only one cover into the entire set. 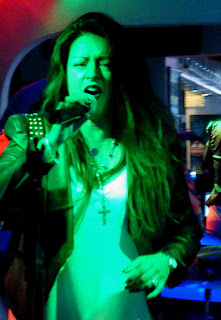 So, at the end of a late afternoon diversion from my usual Sunday routine I have to thank the friends that have repeatedly encouraged me to listen to Malaya Blue, and Claire and Dale at the Walnut Tree Shades for providing yet another fine live music venue within the city walls. I will certainly return for food and refreshment at some point in the not too distant future, and will also be scanning the listing pages for Malaya Blue's return to Norwich (she will be back at the Shades in November, and before that is a date at Norwich's Waterfront on September 23rd).

Keep track of what is on at The Walnut Tree Shades via their own website at http://www.thewalnuttreeshades.com/
and if you want to check out Malaya Blue's touring schedule (or buy a copy of 'Bourbon Street') go to http://malayablue.com/