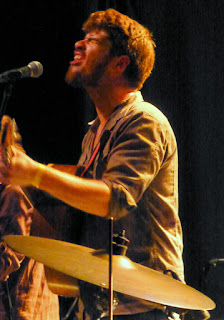 It's not often that Norwich is graced with a visit by a top Californian bluesman, although Marty O'Reilly is quick to point out that his music is also influenced by Folk, Gospel and American Primitive as well as Delta Blues. He was first at Norwich Arts Centre last year, supporting fellow Californians Rainbow Girls, and like all good performers, harnessed the power of 'word of mouth' to ensure a good number of repeat attendees tonight. Indeed, some had already seen him play once already this tour at Maverick Festival in Suffolk only the previous weekend. The other noticeable thing about tonight's audience was the number of local musicians that had come along, some straight from their own performance as part of Norwich's 'Head Out Not Home' programme.

Appropriately enough, support tonight is provided by Andrew Duhon, a singer songwriter from New Orleans, and in the same way that you don't automatically expect bluesmen to come from California, you cannot expect musicians from New Orleans to automatically be bluesmen. Andrew's music is rooted in folk but with a definite Americana vibe. Often performing as a trio, tonight we get to see and hear him perform solo as he takes us through numbers from his Grammy-nominated album 'The Moorings'.

Marty O'Reilly takes the stage with his Old Soul Orchestra, comprising of drums, double bass and fiddle player, and soon sets out his stall, illustrating just why so many of tonight's audience are returning converts. Starting with a gospel number that takes us straight to the deep south, we are taken on a journey that may switch tempo, but never takes the foot off the gas when it comes to passion. Marty's voice and Resonator guitar perform like they are joined at the hip, whilst the other musicians add the rhythm and the embellishment to create a seamless blanket of blues based soul. His head just doesn't seem to ever stop rocking, as he crouches and contorts his body to wrestle out the last drop of emotion from himself and his instrument.

After a set which runs well past the one hour mark, and the statutory encore, we are all invited back into the Norwich Arts Centre bar area, where the band and Marty reconvene and deliver an impromptu 'unplugged' session for those not at risk of missing the last bus home. When you are treated to an evening like this, in the company of musicians who are dedicated to playing for the love of the music, things don't get much better than this.

Marty O'Reilly continues his UK tour with plenty more dates throughout July, before heading to Ireland in August. Full details on his website at http://www.martyoreilly.com/ , and the album 'Pray for Rain' is available on i-Tunes.

Andrew Duhon's album 'The Moorings' is also available on i-Tunes, and more details are on Andrew's website at http://andrewduhon.com/