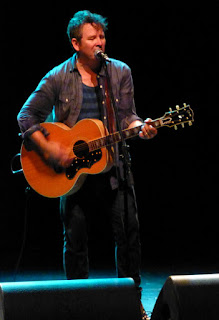 It's apparently the hottest July day since records began, and lovely for those on the Norfolk coast or at the Royal Norfolk Show. Not so nice for those at work, or for those trying to get home through the numerous sets of roadworks that seem to be springing up all around Norwich at the moment.

We are now not only in the throes of our esteemed annual agricultural show, a chance for the farming community to pick the biggest bull and loveliest cow; today is also the third day of Wimbledon, meaning there are still a handful of British players still sweating it out in SW19; and we are now well into festival season, having hosted Radio 1's Big Weekend at the end of May, had a chance to watch Kanye do his thing on the telly at Glastonbury, and it is now nearly time to get our camping gear checked out ready for Latitude in a couple of weekends' time. Which means that the number of gigs takes a bit of a hiatus over the next couple of months, but not before tonight's real treat for fans of Americana.

Despite all this Summer sweltering and activity there is therefore a good crowd at tonight's Norwich Arts Centre gig featuring Grant Lee Phillips (formerly of Grant Lee Buffalo), as he performs a solo set as a conclusion to the UK leg of his current European tour. Next stop - Rennes in France.

But before Grant-Lee takes the stage we are treated to a female singer-songwriter whose name may well be new to some, although she recently played a couple of sets at Bedfords. Her name - Sadie Jemmett.

With a biography that is itself worthy of a film script, Jemmett has finally put down roots in the Ashdown Forest in Sussex, after a ten year sojourn in London, preceded by a nomadic existence throughout Europe. A debut album in 2011, 'The Blacksmith's Girl', released on Judy Collins' Wildflower Records is about to be followed up with a second collection of highly personal self-penned compositions, 'London Love Songs'. In tonight's opener set she includes the title tracks from both albums, together with a selection of new songs, and the poignant 'Another Way To Be', written during the recording of 'The Blacksmith's Girl' in America whilst having to leave her young daughter back in the UK. On a sultry Wednesday evening, and battling to keep her guitar tuned in the heat, we are fed titbits of her musical and personal journey. The electric fan at the side of stage may not be cooling the air that much, but it certainly give her blonde hair the glamour effect.

Whilst Sadie Jemmett cites Joni Mitchell and Judy Collins amongst her musical heroes, the honest and confessional nature of her songwriting certainly reflects her own life experiences. Songs like 'Adventures in Sobriety' display her care for close friends, whilst 'Five Things I Noticed As I Walk to Camden Square' attempt a positive, almost nursery rhyme, spin on bringing up a child in challenging circumstances. With supermarket CD shelves forever racked up with so many pre-packaged short shelf-life artists it would be lovely to see a true talent like this emerge to reach a much wider audience. Spread the word. 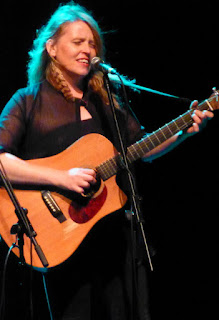 Grant Lee Phillips has been driven across from Coventry by his road crew, but doesn't seem sure whether he is in the South or West of the country. Hell, what does it matter? He is here, and his legion of fans are treated to a solo set that covers everything from new, as yet unreleased, songs like 'Cry, Cry' and 'Smoke and Sparks' to the very first Grant Lee Buffalo album ('Jupiter and Teardrop' from the 1993 'Fuzz Box'). Often compared to Neil Young tonight, in the heat, a sweaty Phillips looks and sounds at times more like a laid-back Bruce Springsteen, and even manages to rock a little in 'Arousing Thunder'.

A member of the audience recalls having to eat baked beans for a month to save enough money to buy his albums, and a discussion about Crunchie Bars and Double Deckers confirms that it is a friendly and relaxed Grant Lee that is in the house tonight, clearly enjoying the chance to play an intimate set in the old church setting of Norwich Arts Centre ("I love what you guys have done with the place!")  to such loyal fans. He does not remember playing Norwich before, and apologises when he is reminded by those present on his last visit here in 1993. Abandoning the prepared setlist in order to ask the audience to shout out requests it comes as no surprise that 'Rock of Ages' and 'Truly, Truly' get a rendition. Another request, 'Vanishing Song' is performed perfectly as part of the encore, despite Phillips claiming not to have played it for ages. A true gentleman, and a much appreciated appearance, earning a standing ovation from many of the audience.

Back out into the sweltering heat of the Norwich night. Still no thunderstorm to clear the air, but a magical evening all the same. 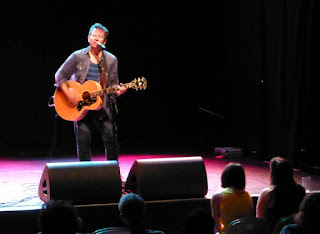 Sadie Jemmett has a website at http://sadiejemmett.com/ which includes full bio, links to social media pages, and a free download.

Grant-Lee Phillips has a comprehensive website at http://www.grantleephillips.com/ which has details of all Grant Lee Buffalo and Grant Lee Phillips releases.
Posted by auckers at 06:33