Brexit, Glastonbury and Euro 2016 - What I Didn't Do at The Weekend 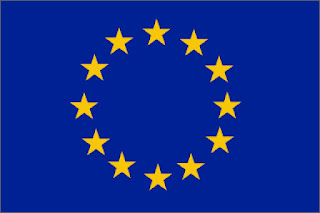 It has been quite a busy few days. Facebook is dominated by posts about the Brexit fallout. Only those trapped in the Glastonbury bubble of mud seem to have had any chance of keeping calm and carrying on this weekend. Suddenly, even the football seems to have become an irrelevance. Who gives a toss about beating Iceland when we have to work out how to bandage a badly aimed shot to the nation's foot?

Well, thank goodness for music, theatre and art, because that is what has kept my sanity over the maelstrom of political fallout of the last few days.

My postal vote had been submitted weeks ago, leaving me free on Thursday to help out at the Norwich University of The Arts' after-party at Norwich Arts Centre celebrating the arrival in Norwich of British Art Show 8. Co-hosted by NUA and Norwich Castle Museum and Art Gallery, this touring exhibition of British contemporary art is organised once every five years by London's Hayward Gallery, and this time around visits Leeds, Edinburgh, Southampton, and finally Norwich. From now until September 24th visitors can see works by forty of this country's leading artists exhibited at Norwich Castle, The Forum, and at Norwich University of the Arts. Make no mistake. This is a cultural biggie for the city. September 24th may seem a long way off, but it would be a real shame to miss out on this one by forgetting, or leaving it too late. 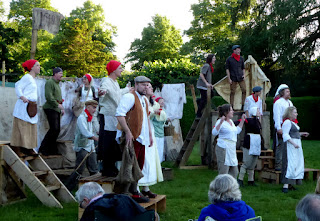 Friday morning was met by many with stunned disbelief. Oddly enough, and with a certain irony, Friday was also scheduled for the first public performance of '1549 - The Story of Kett's Rebellion', a socio-political drama from local company 'The Common Lot' that re-told the story of Norfolk's peasant uprising against the enclosure of common land. I attended the first show that evening, held on the old bowling green at Norwich's Heigham Park, and reported on it for Outline Magazine http://www.outlineonline.co.uk/arts/theatre/ketts-rebellion-1549-heigham-park .

Afterwards, I hot-footed it back to Norwich Arts Centre to catch the remainder of Mercury Rev's set, who were playing a sold-out gig at the intimate venue in front of a crowd of 260, before heading off to Glastonbury the following day to perform in front of thousands. For some of us present it was the first chance to see this influential American indie band play in Norwich since the heady days of 'Deserter's Songs' back in May 1999 at the UEA. For others it was a new experience, but either way enigmatic vocalist Jonathan Donahue and guitarist Grasshopper, together with their keyboards player and drummer, turned in a truly auspicious performance. Certainly the powerful lights brought in to the venue by the band, a deconsecrated medieval church in the historic Norwich Lanes district, and the powerful smoke machines conjured up a cauldron of intensity not usually witnessed within. But it was the sheer presence of the band, and the mesmerising beauty of songs like 'Holes' and 'The Dark is Rising' that left us spellbound. Watching Mercury Rev next day on the television feed from Glastonbury reassured me that it was us, the Norwich audience, that had the more connected and intimate experience. 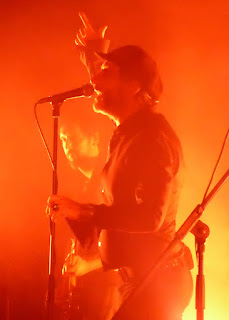 Saturday was a chance to see a much younger and newer band to visit Norwich, as I saw electro-pop duo Avec Sans perform at the Waterfront Studio in King Street. Doubling up as a showcase for local talent, this gig was organised by Tilting Sky and local music bloggers Alphabet Bands, and gave me a chance to see Ginny Dix, Abigail Blake and Maya Law also perform. 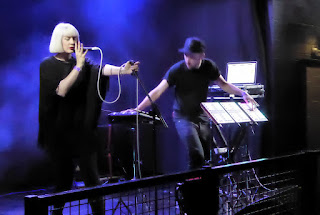 There may be a good reason why the three support acts' entourages seemed to melt away into the evening before Avec Sans took the stage, but it was their loss. The London-based duo have a commanding presence, and Jack St James' use of the three outward-facing Novation launch pads as musical instrument, MIDI interface and lightshow was spectacularly innovative. Vocalist Alice Fox is also has an imposing stage presence, so much more than just stylish clothes and geometric haircut. Her involvement and contribution to the Avec Sans sound is not to be underestimated. Heartbreak Hi is a moody highlight to the set, which proves that there is more to this duo than mere pop tunes. Expect to hear a lot more from these guys.

And so to Sunday. Admittedly I spent most of the daytime catching up with the Glastonbury coverage via the BBC i-Player, and even managed to pick out daughter Florence and her friends during the set from Foals. Well, at least she was still alive and healthy on Friday evening. 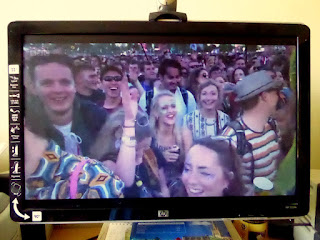 Sunday evening saw me back at Norwich Arts Centre, volunteering on the box office for American rapper, poet and hip-hop musician Saul Williams. I missed the chance to see his set, but certainly heard all of it from my position at front of house. You can read the review from fellow Outline correspondent Stu Preston here - http://www.outlineonline.co.uk/music/live-reviews/saul-williams-norwich-arts-centre

So that was my weekend. As for many other people it was a weekend the like of which I may never experience again, and as we enter uncharted waters, with financial and economic uncertainties looming, as well as the prospect of a new Government or even General Election, again I am grateful for the gift of music. It is a gift that has never let me down in the past, and one that I know I shall rely on immensely in the weeks and months to come.

Keep calm, and boogie on.