Hark! It's BRAIDS on a Monday 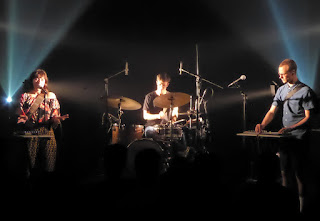 Last Friday Norwich Arts Centre had the privilege of hosting US indie legends Mercury Rev on the night before they played on the Park Stage at Glastonbury. Now, on the Monday night the same venue is presenting Canadian electro indie-rockers BRAIDS, the day after performing on the Pussy Parlure stage in the Silver Hayes area of the festival (the same stage that on the same weekend hosted fellow recent visitors to NAC, Frances and Estère).

This is BRAIDS last UK gig before flying back to Canada, so full credit to the venue for securing the band for this 'Hark!' night, dedicated to showcasing the best in contemporary electronic music. In keeping with the policy of featuring local as well as national and international acts, it is local musician and visual artist Henry Jackson Newcomb that opens with a stunning set combining pulsating synth rhythms and some pretty cool guitar work. Placed against a backdrop of his colour-shifting visuals, and we have a performance that has a real rhythm and spontaneity to complement the carefully prepped synth samples. A real counter to those who argue that electronic musicians simply press a start button, and let the set run itself. 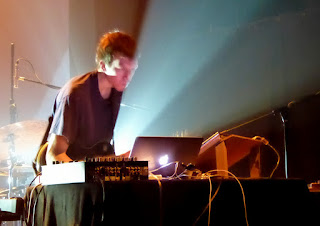 Originally from Calgary but now based in Montreal, BRAIDS are a three-piece featuring former high-school friends Raphaelle Standell-Preston , Austin Tufts and Taylor Smith. Originally named The Neighbourhood Council, a five piece band that also included fellow collegians Katie Lee and Vince Man, it was the re-location to Montreal, the revised line-up and the re-issue of the EP 'Set Pieces' in 2008 that prompted the name change to BRAIDS. Since then, the albums 'Native Speaker', 'Florish // Perish', and last year's 'Deep In The Iris' have seen the trio progress further towards electronic music, although it is the versatile vocals of Standell-Preston and the fidgety jazz-infused drumming of Tufts that continues to give the band a real live feel, even on record. 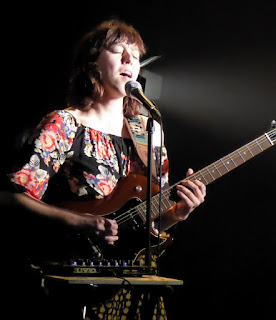 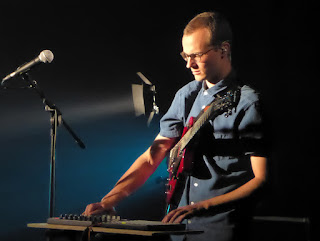 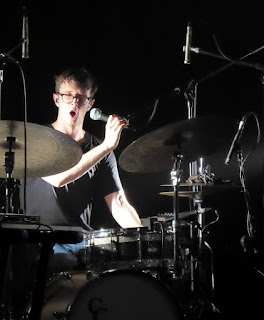 The set consists entirely of newer material, drawing from the last album and also featuring three tracks from the new EP 'Companion'. Raphaelle is undoubtedly the focus of the band - she and Taylor Smith share duties on keyboards and guitars, but it is her vocals weaving spells in alternating threads of soaring lightness and rich colour that create the range of textures on show. Her voice can swoop between elements of Bjork, Kate Bush and fellow Canadian Megan James (Purity Ring). Like the namesake hair plaits sported by the mud-splattered Glasto audiences, BRAIDS bring a rainbow palette to their performance - from the powerful protest of 'Miniskirt' to the upbeat joy of 'Joni', and finally the mournful sense of loss in 'Companion'. Every song is a captivating slice of rhythm, melody and lyricism wrought together via a spectrum of moods.

Once again, the set lighting creates exactly the right atmosphere for the artist. After the cauldron-like intensity of the smokey haze created on Friday for the Mercury Rev gig, tonight's mood is a powerful contrast of brightness created by studio spotlighting set against a black backdrop, adding clarity and sharpness to the whole experience.

Who knows when BRAIDS will return to Norwich Arts Centre. Like many transatlantic artists they seem impressed by the medieval setting of the venue. Let's hope that it will encourage them to visit us again one day. Full credit to 'Hark!' for securing the booking, and to Henry Jackson Newcomb for such a rich opening set.