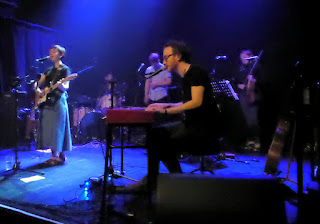 It is eighteen months since someone tipped me the wink about an amazing local band called Wooden Arms, who were launching their new album at the Octagon Chapel during Norwich Sound and Vision 2014. It was a Friday night, as I recall, and I had been volunteering at the associated beer festival being held in St Margarets Church (if there's one thing better than a piss up in a brewery then it has to be a piss up in a deconsecrated church) just up the road from Norwich Arts Centre. By the time it got to nine o'clock I was certainly feeling thirsty (having watched large quantities of lovely real ales being quaffed all day within sight of my position), but opted instead to run over to Colegate to see what this band was all about.

By the time I got there the set was all but over, but I entered the Octagon Chapel just as Jeff Smith was starting the trumpet solo to 'December'. It was one of those defining 'goosebump' moments that stays with you for ever. Ironically, I believe that the only other track I got to hear that night was the album closer 'False Start', but I have had the pleasure to hear the band on several occasions since, and of course bought the album.

Tonight at the Norwich Arts Centre I am here to see Wooden Arms perform a rather special set to kick off their latest mini-tour that takes in London and the south coast in support of new single 'Burial'. Special in so far that support is from two local singers, both with extraordinary voices, and both who I first saw performing on the same bill back in 2014 during the highly successful Norwich Oxjam event at Bedfords. Their names - Phoebe Robinson and Milly Hirst. 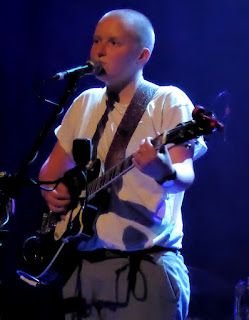 Phoebe Robinson, originally from North Walsham but now studying at Goldsmiths in London, was at the time a shy teenager with an acoustic guitar, but she blew me away with her cover of Beyonce's 'If I Was A Boy', as well as a number of heartfelt self-penned numbers. Tonight she opens at Norwich Arts Centre with an assured collection of old and new songs, performed this time with electric guitar. She also makes an announcement that this would be the last solo performance before launching her new musical project. The voice is every bit as good as I remember, soft and almost husky at times, yet capable of soaring into mezzo-soprano territory for moments of dramatic effect. Her songs are personal, almost painful at times, yet beautifully honest. She tackles issues of tragedy, loss and equality, not without the occasional trace of anger as well as regret, in songs about issues as diverse as the Orlando shootings, walking home alone at night, and nocturnal panic attacks. These all appear surprising brave for a young woman who chose to study a degree in 'Pop Music'. One to watch. 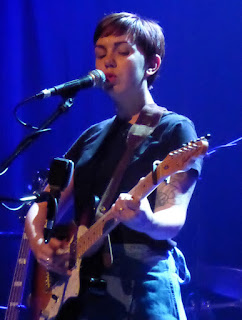 I actually saw Milly Hirst perform live before I saw Wooden Arms for the first time. Again, it was in the crypt at Bedfords, and I remember Milly apologising in advance as she had not performed any of her own songs live for some time. Not that she needed to have worried. She had the whole audience spellbound for the entire set, and didn't miss a trick. Tonight she is playing electric guitar live for the first time, and reveals that she has been anxious in the lead up to this set. Not that she needed to worry. Her gorgeous, almost pastoral vocals are given a new, contemporary feel with the new sound that can only propel her to more success, now that she can concentrate on finishing that long-promised debut album. She switches back to acoustic for the moving story of 'Mary', the grandmother whose love life recently revealed a previously hidden twist, and finally invites Wooden Arms on stage to turn the tables and provide long overdue accompaniment to one of her songs. A real treat of a set, and we now have permission to stop her in the street and nudge or prod her about getting that debut album completed. Official.

Wooden Arms are actually performing for the second time in two nights in Norwich. The previous evening saw them set up in the front room of a house in the north of the city for the first of the city's Sofar Sessions, guerilla gigs set up and announced at the last minute via the internet. Those present were treated to an acoustic set, as well as performances from riot-girl punk band Peach Club, and teenage singer-songwriter Maya Law. A great idea, and one that I hope catches on. 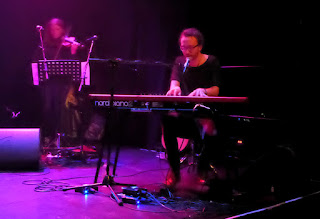 The line-up of Wooden Arms has changed several times over the years, and tonight's performance is no different. After six months with the band violinist Phoebe Fulbrook unfortunately broke her leg two days ago, and is out of action for this tour. Her place is taken by Connie for whom this is only her second show following her Sofar debut last night. 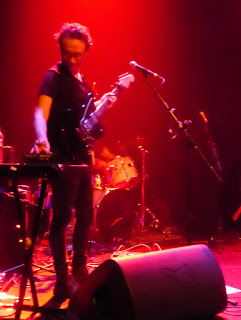 There is a mix of familiar and new songs in tonight's set, including the meloncholic single 'Burial' and my first hearing of 'Cole Porter', another epic with plenty of ballroom grandeur and flourishes from Alex on keyboards. But it is the older tracks, from the album 'Tide', that provide the prompt for Milly Hirst to join the band on stage and provide those glorious vocal harmonies that, for me, will always define the Wooden Arms sound. 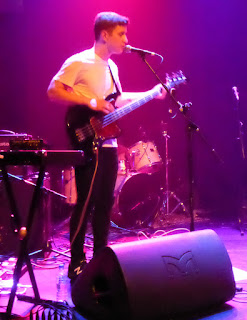 Jeff Smith, who provides that haunting trumpet on 'False Start' and also plays guitar, provides a lot more of the vocals on the new songs, and it is his voice that provides the perfect foil to Alex Carson, who has the ability to sound at times like Jethro Tull's Ian Anderson whilst mimicing Coldplay's Chris Martin behind the piano. Not that Carson is not the showman in his own right. His renowned sense of humour is never far away, and the trademark painted toenails are saved until late in the set when he finally kicks off his boots and removes the socks. His nervous energy is a force to be reckoned with, even if he does have trouble remembering his own setlist. There are a series of 'musical chair' moments as the band juggle positions between songs, including one song where Jeff ends up on acoustic guitar behind the Nord whilst Alex is plugging in the electric guitar. 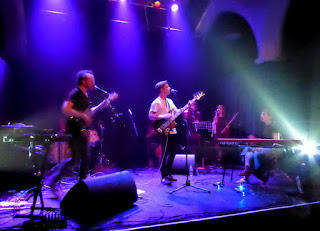 The evening is a triumph, a fine moment to wish them well with the remainder of the tour. But we are not done yet. The encore is a cover of The Cure's 'Lullaby', a slightly scary song when performed by Robert Smith, but turned into a thing of sensual beauty when given the full Wooden Arms treatment. You may call him Mr. Fancy Pants (for that is how Alex referred to himself when introducing this song) but 'Lullaby' impresses through the interpretive processes involved in this version as much as in the delivery. We love all the Wooden Arms songs to bits, but would so love to hear some more covers like this as well, please. Onwards and upwards. 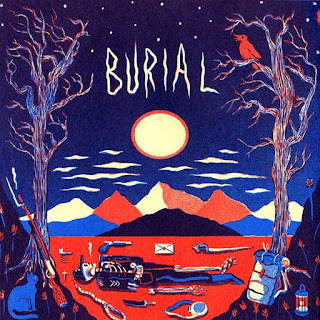