KlangHaus Four Storeys at St George's Works, Norwich - To Which I Add My Own, the Volunteer Usher's Tale 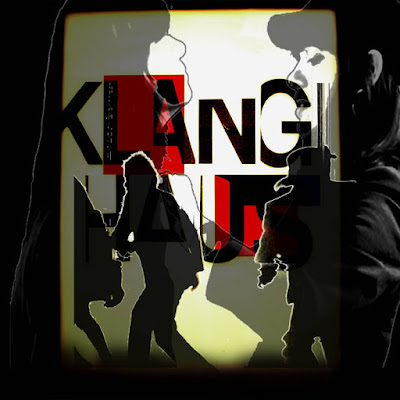 The Neutrinos, having achieved local acclaim working with visual artist Sal Pittman (that's in addition to being applauded as ground-breakers, boundary-pushers and genre-defiers), are now receiving national recognition as a must-see collaboration since developing the KlangHaus concept in a disused Berlin radio station several years ago. The idea was to conceive a show that blurred the boundaries between audience and performer, and also involved the performance venue as an additional instrument and voice. What followed was a combination of rock gig, art installation, and site-specific audience experience that brought disused spaces back to life with resonance, music and light.

After a triumphant run of performances in a disused veterinary hospital during the 2014 Edinburgh Festival the show, now called On Air, was taken into the roof spaces above London's Royal Festival Hall in the summer of 2016. I became involved with Klanghaus for the first time when I volunteered as an usher last September for two performances of Alight Here, performed in a disused bus depot in Colchester. I was immediately blown away by the sheer energy, sensory immersion and site-specific aesthetics of the show. Although I had seen earlier prototype performances at venues like Norwich Arts Centre, this was now something completely different. Reviving songs from The Neutrinos' 2007 album One Way Kiss, adding especially written new material, and using the building itself as a blank canvas for Sal Pittman's visuals, the show was a revelation. I was hooked. As soon as it was announced that KlangHaus would be re-worked as Four Storeys for a December home-coming at a former shoe factory in Norwich I immediately re-offered my services. 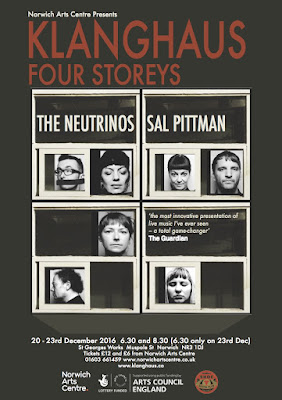 Those who live in Norwich already know of the city's historic importance as a centre of shoe making in the UK - household names like Bally, Start-Rite, Van-Dal and Norvic all made footwear in our fine city. By 1936, St. George's Works in Muspole Street was part of the extensive Howlett & White site and was used as a warehouse for the storage of over 250,000 pairs of shoes. Later it was used a furniture storage facility for local removals firm Hadley & Ottaway. Now, large parts of it stand empty as the site awaits redevelopment to provide 57 new residential dwellings. 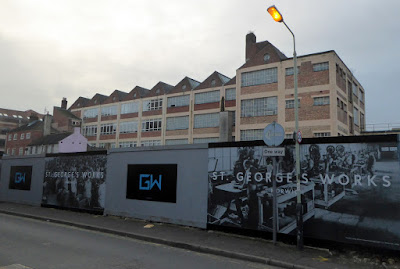 My first sight of St Georges Works came on the Sunday before our scheduled health and safety briefing on the Monday. I decided to check it out, as I had been labouring under the misapprehension that the shows would be performed at the nearby St Mary's Works in Oak Street - another redundant shoe factory currently being granted a temporary lease of life as a performance venue for the Shoe Factory Social Club. St Georges, however, is tucked away in Muspole Street, a narrow one-way thoroughfare that is accessed via Duke Street, and runs down to join up with Colegate opposite the new Jane Austen College. One end of the building has been renovated into office space and includes the studios of Heart FM. The separate bulding at the far end is used as workshops and studios by various artists. The large derelict bit in the middle is where Four Storeys was to be performed. 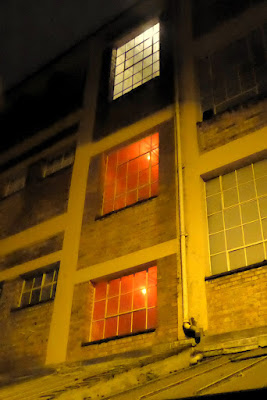 During the briefing on Monday afternoon it became apparent just how thorough the production team had been in ensuring that the building was safe for both performers and audience. Broken window panes had been masked off, roof leaks had been identified and minimised, trip hazards highlighted appropriately (and zoned off completely wherever possible), and low overhead obstacles wrapped in protective foam sleeves. The top floor of the building had been declared off limits, leaving the ground floor, mezzanine and 1st and 2nd floors to provide the Four Storeys responsible for giving the show its name. Fire extinguishers had been positioned throughout the whole route of the show. 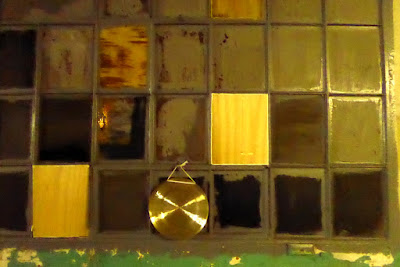 As well as being briefed on keeping the audience safe, we were given a walk-through of the building and show. Rosie, Alex and Lucy, three members of the production team would escort the audience around the building, aided by Annie and myself as volunteer ushers. Between us we needed to ensure that the audience of fifty were safely in the right place at the right time for each of the band's six separate locations, but also ensure that they were given both space and time to explore Sal Pittman's projections and installations along the route. To highlight trip hazards and overhead obstacles we were provided with torches, but encouraged to use them only when necessary. With shows scheduled for 6.30 and 8.30pm starts, the building would not have the benefit of any natural daylight. 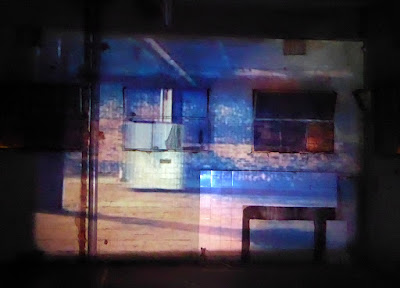 Our first experience of the show came with the 4.30pm dress rehearsal, and a real live audience of invited guests, press and Norwich Arts Centre staff. These were our guinea pigs, if you like, to test out the timings, and to see if an audience behaved as expected when following the route. It also gave us a better idea of where and how to deploy ourselves and how to guide our audience smoothly and seamlessly through the show. A further show at 6.30pm for invited art and music students gave us a second chance to fine tune things before the first performance proper on the Tuesday evening. 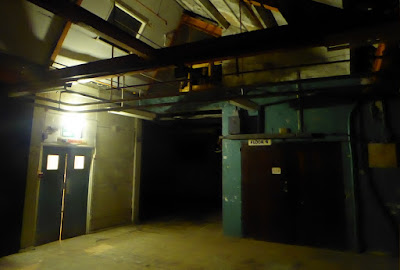 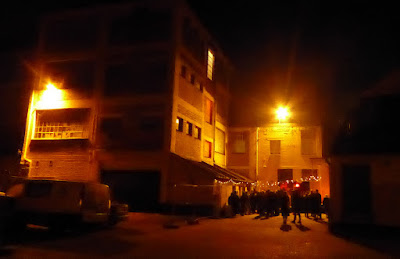 Over the next four nights there were a total of seven sold out shows for ticket-holders, plus a further two shows on the Friday night for the artists' friends and families. A portable bar in a converted horsebox was provided by the The Bicycle Shop Café for the benefit of arriving audiences, but announcements warning of the absence of toilets once the shows started were required (We were, however, able to escort groups across to the adjacent building where their first floor washroom facilities had been made available to us). We were lucky with the weather. Although it was cold (and the building was completely unheated), it remained dry for the benefit of checking off ticket-holders, and for the enjoyment of those pre-show drinks. 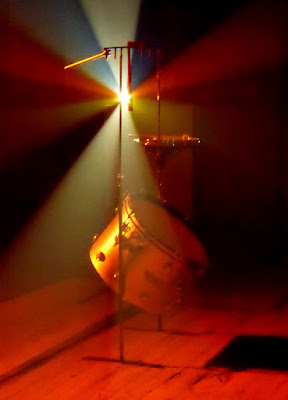 By and large, audiences behaved as anticipated and followed the performers around the building without any accidents or mishap. Only occasionally were we caught out by the herding instinct, when a small number at the front would peel off in unexpected directions only to be followed by the remaining fifty. Our main aim as ushers was to make sure that the audiences could see and hear the whole show, and sometimes this did mean having to firmly but politely keep them from straying beyond certain key markers. By the end of the final show, I believe that we almost had it cracked. A good indicator of the success of the journey taken through the building came at the end of the final song, after which everyone was provided with a tot of hot rum. Audience had been returned to exactly the same point where they had entered the building fifty minutes earlier, but many had become disorientated en route to the point that they still needed to ask us the way out. And that was not just the strength of the rum. 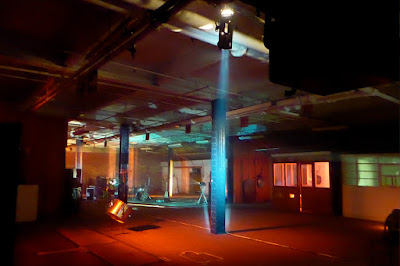 I deliberately have not tried to review the Four Storeys show itself. There are many fine reviews available online, and I would possibly suggest that from Outline Magazine to give a feel of what to expect from Klanghaus. Similarly, it would not have been appropriate for me to try and take photographs of the show itself whilst working as an usher. Richard Shashamane has posted some excellent images on his norwich blog site.  However, I would still pick out a number of moments from the show that will stay with me for long after those chilly December evenings have passed -

1) Just after entering the ground floor an outstretched arm reaches from a hole in the ceiling. A spotlight picks out a broken guitar neck being offered up to it as percussion resonates from several different corners of the room. Dramatic and intriguing.

2) The audience is led into a smokey low-ceiling room representing a misty woodland. Karen Reilly plays a saw and sings, whilst Jon Baker plays keyboard. Elements of the Norfolk legend of 'Babes in The Wood'. Beautiful. 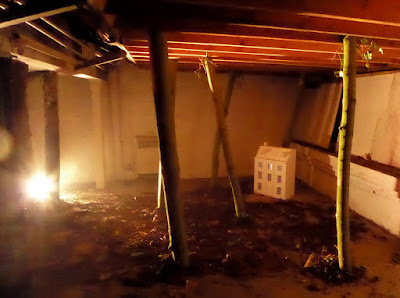 3) From within the first floor offices the band plays a ferocious number whilst Karen sings silhouetted behind a projection screen as Sal Pittman's imagery augments. Visually exciting. And loud.

4) From the darkness at the back of the cavernous first floor emptiness Karen walks towards the audience, her unamplified voice carrying through the vastness and stillness of the space, her breath visible against the coldness of the air as she delivers a spine-tingling version of Reverse Heaven. This is followed by drummer Jeron Gundersen creating a percussive cacophany whilst being propelled the entire length of the building. Stunning. 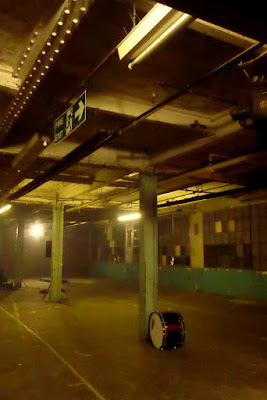 5) The atmospheric soundscapes and installations of the second floor - images of old furniture and memories melting and disappearing into the walls and floor itself. Eerie. 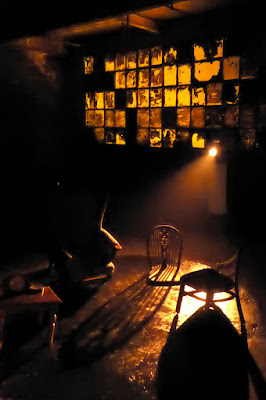 6) Back on the ground floor the audience form a circle around the band for the uptempo but emotionally charged final song, Donkey Work, whilst projections rain down on both band and audience. Uplifting and glorious. 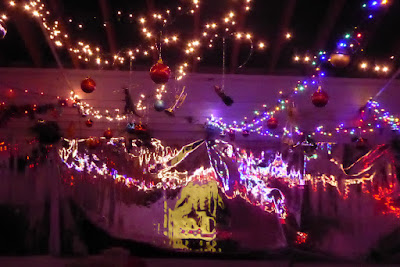 7) And finally. After passing through the fur coats and into the 'Christmas' room, Karen and Jon lead the audience in a beautiful and poignant rendition of new song Unsung. A moment that choked me up on each and every show. Holding back the tears. 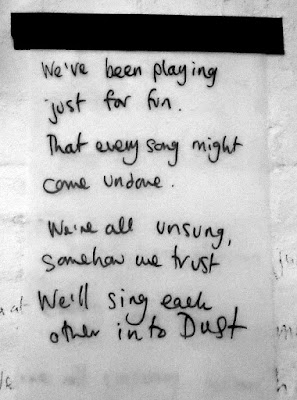 So that was my KlangHaus Christmas - five days spent with a wonderful team of artists, and rewarded with an unforgettable experience. Thanks to Rosie and Alex for inviting me to usher, and to Karen, Jon, Mark and Jeron of The Neutrinos for making me feel so welcome, and part of the show. Your gifts at the end of the final show were greatly appreciated, and the framed print will be treasured. 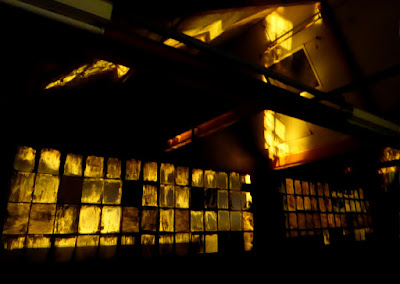 The following day would be Christmas Eve. How on earth could Baby Jesus be expected to top that?