Jolie Holland and Samantha Parton - Back Together Alone Again For The Very First Time? 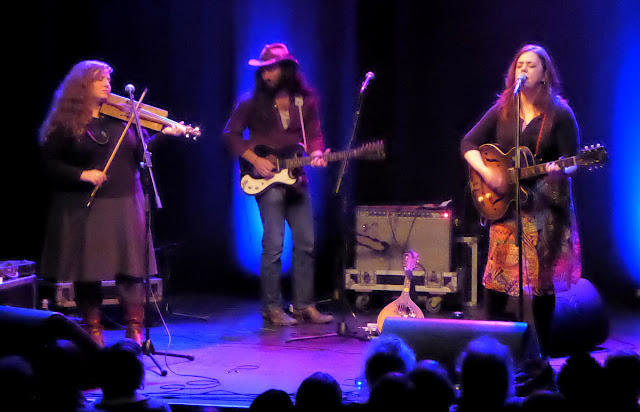 Unlike a fellow music writer friend of mine, who claims to have been playing a Be Good Tanyas album whilst his wife was giving birth to their eldest child (I cannot claim anything quite so eclectic - my son was born to the accompaniment of Celebrity Bullseye showing on the delivery room television at the old Norfolk and Norwich Hospital), my prior knowledge of this highly revered alt-country trio was somewhat limited - they did not feature in my album collection, and I had not ever seen them live. Not that that was going to stop me wanting to see founder members Jolie Holland and Samantha Parton playing together again for a gig at Norwich Arts Centre. Anyone who knows me understands that, since 'retiring', I have become something of a cultural sponge, absorbing all types of new music and artists.

Another point of intrigue, for me, was the name of the support act on seven UK dates of this tour - one Reuben Hollebon, from Stalham in Norfolk. Reuben tentatively admitted that, despite playing throughout the UK and having been on two European tours, he had never ever played Norwich before, despite living a mere 15 miles up the road. 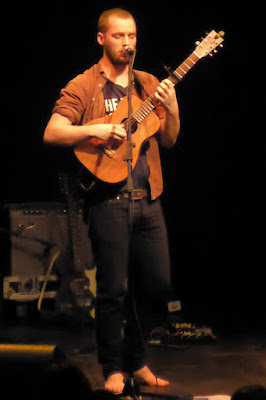 Barefooted and unaccompanied, it was just Hollebon and his mini guitar that opened to a crowded mix of seated and standing audience tonight. Seeming slightly nervous, and perhaps naturally a man of few words, it was left largely to his songs to do the talking. With a voice that had the combined quality of flint and slate - edgy and sharp but with a fine contrast in  texture, we were rapt by the intensity of the performance to the point of almost being afraid to breathe. Quite an extraordinary performance from someone who, until now, has perhaps been better known for his work as a sound engineer with the likes of Basement Jaxx and Courtney Barnett. Faces was perhaps the strongest song from his set, but check also out his stunning video filmed at Dungeness for On and On (which has also been re-mixed by the likes of Mystery Jets and Submotion Orchestra). Hopefully he will be back, schedule permitting, with his band sometime soon. 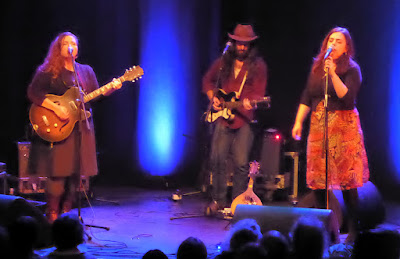 Jolie Holland and Samantha Parton take the stage after a short interval, and also present is guitarist Stevie Weinstein-Foner. It is his vintage guitar that Holland needs to finish tuning before the trio are able to start their opening song, the traditional ballad The Lakes of Pontchartrain. Whilst beautiful in tone, this 1959 customised instrument proves temperamental, requiring frequent re-tuning throughout the evening as it is passed between Holland and Parton during the set. In between, Holland plays an interesting looking box fiddle and whistles beautifully on a couple of numbers, whilst Parton picks up acoustic guitar and mandolin duties. Weinstein-Foner ties the whole thing together beautifully, not only with his guitar work and occasional vocal contribution, but with a laconic line in back-seat banter between songs. 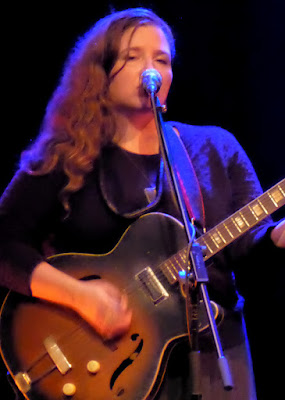 In fact, the whole performance style is so laid back as to be almost perpendicular - no wonder Norfolk audiences love these guys so much. There appears to be no rush to introduce or start each number. Comments are more often than not asides to each other that the audience is allowed in on. We are at one point asked whether it is true that The Beatles once played here. Replies are offered from the floor, but things get complicated when Harry Nilsson becomes confused with Lord Nelson, and we move on. 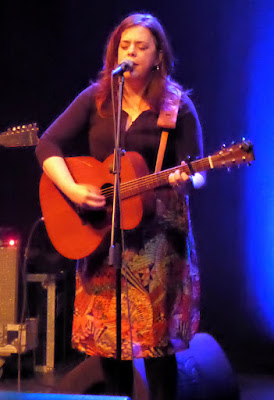 There are two covers of Townes van Zandt songs - You Are Not Needed Now and Waiting Around to Die, and a version of Dylan's 'uncompleted' Minstrel Boy, as well as Tanyas originals and three new songs from the yet-to-be-released collaboration album from Holland and Parton. During the introduction to one of these, titled Make It Up To Me, Parton lets slip that the release date is still undecided (possibly sometime during 'the second half of 2017') and that she has suggested Back Together Alone Again For The Very First Time as a working title.

The final number is a stirring version of the traditional Oh Susannah and then a single-song encore of Jolie Holland's Mexican Blue concludes the evening. As we leave the venue someone comments that the set had lasted just short of an hour and a half. It hardly seems possible - the evening seems to have simply flown by. Perhaps that laid-back combination of West Coast Americas and Norfolk has contrived to somehow slow down time itself. Either way, it was a magical combination.