Sofar Sounds in a Nuclear Bunker - Norwich Does it the Old School Way. 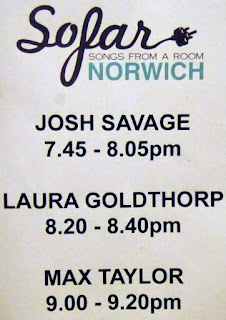 Josh Savage, Laura Goldthorp and Max Taylor provided the three musical courses last night as Sofar Sounds Norwich hosted their soirée at a secret location just up the road from the city's main railway station. Armed with wine glasses, cushions and our own refreshments we presented ourselves at the entrance to a genuine former cold-war nuclear bunker, where a bearded man check our names off against a clipboard before allowing us to step inside. If Trump loses the last of his marbles tonight, and it all kicks off, then as the missiles start to fly above our heads we will all be safely entombed, and listening to some lovely live music.

I love the concept of Sofar Sounds, otherwise known as 'Songs From A Room'. Starting in London in 2009, and since then spreading to over 200 cities across the world, Sofar Sounds now puts on over 100 private concerts every month. Audiences apply for tickets in advance, unaware of whom they will hear perform until they actually arrive. In the UK acts like James Bay, Bastille and Wolf Alice have all been known to show up and play Sofar Sound sessions. The exact location is also kept secret until a day before the gig. It may be a room in a private house or flat, or may be an office or back room of a shop. Either way, space will be small, and audience size will be restricted to just a few dozen. The gig will be intimate, and always rather special. No wonder, therefore, that most Sofar Sound sessions are over subscribed. 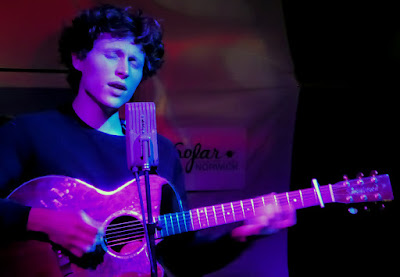 Opening tonight in the retro opulence of Jason Baldock's recording studio housed within this bunker is Josh Savage, a Sofar Sounds veteran playing the final UK date of this tour before heading off to Paris. Armed simply with an acoustic guitar Josh casts a spell that bewitches his audience with gentle songs of love and unfulfilled dreams. With the likes of Bella, Whisper In The Snow and Lost In Paris, we are transported like butterfly souls, helpless to resist even the gentlest of lyrical breezes, although the jars of honey available from his merchandise selection provide suitably sweet distraction. 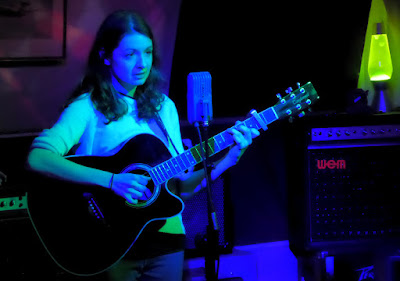 Local singer-songwriter Laura Goldthorp follows. Currently a student at the UEA, Laura's appearances are always something special, and tonight is no different. Whether it is the attentiveness of the audience, the acoustics of the studio, or Jason's legendary RCA ribbon microphone being used, her voice tonight seems even sweeter and more beautiful than usual. It combines the lightness of Lucy Rose with the emotional sensitivity of Laura Marling to devastating effect. In fact, it is a Marling cover, New Romantic, along with Leonard Cohen's Chelsea Hotel #2, that Laura chooses with which to intersperse her own compositions. Look out for future Laura Goldthorp gigs via local listing pages whilst she remains with us within this fine city. 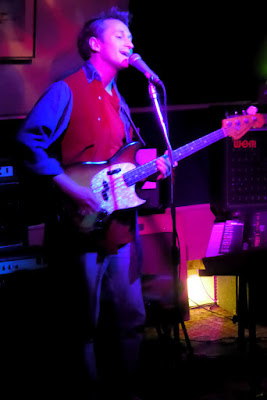 Tonight's three piece suite of Sofar serenaders was completed by Max Taylor, another singer-songwriter, who appears to play quite regularly in the London and Brighton area. Perhaps slightly more of an acquired taste, with a voice that reaches into the higher ranges usually inhabited by the likes of Morten Harket and Stephen Bishop, Taylor has an appearance that initially reminds me of Ralph Malph from Happy Days, and once that image is in my head there is seemingly nothing that will shift it. Taylor sings three numbers accompanying himself on Fender Mustang bass, and switches to keys for the other two. The bass guitar notes seem to generate occasional sympathetic vibration from what sound like cymbals elsewhere in the studio, and the keyboard is not his own, but one borrowed from Jason, but it is the strength of the songs that carries the performance.

So this was my second experience of Sofar Sounds, and one that I hope to repeat in the near future. For those interested in attending a future event, or even fancy hosting a session in your own home, head to Sofar Sounds' website and register. You may not know who or what you are going to hear, but it will certainly be an experience that you will not forget.

Thanks to Jason for hosting, Chad for compering, Georgie for organising, and all three acts for performing.