Los Campesinos! Welcome Back to Norwich 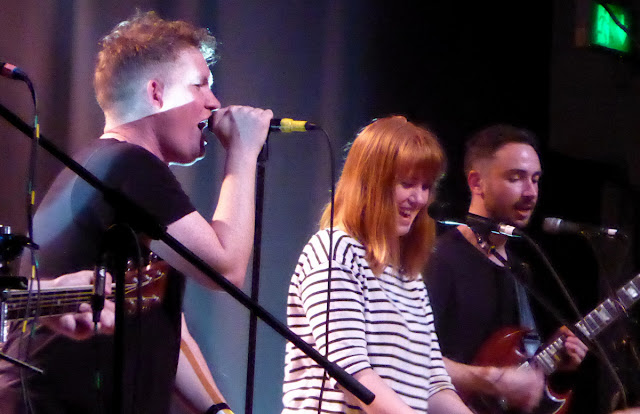 There are some bands that tell you how much that they love touring, and how great it is to be back in Norwich (some even pronounce it correctly - it's not Nor-witch, but Norritch). And there are some bands that appear to behave on stage like a bunch of buddies but actually hate the sight of each other. They simply cannot wait to get off stage and back to their separate rooms at the Premier Inn. But very few manage to exude such joy and cameraderie, both to each other and to their audiences, and in such generous amounts as Los Campesinos!

Formed at Cardiff University in early 2006 as an eight-piece, the band released five albums between 2008 and 2014, during which time I saw them play Norwich Arts Centre twice and again at Festival No6 in Portmeirion. Yet they were never what I would call one of my 'favourite' bands. You know, one of those that you bang on about to all your friends, and always vote for in any on-line poll. The first and third albums are in my collection, and I listen to their stuff at home occasionally, and yet they are an act that I would still hate to miss if they came to town. Hence, on Saturday night, I was back at NAC to see them for the fourth time, and looking forward to hearing tracks from their latest album, Sick Scenes.

By the time I first saw Los Campesinos! back in 2010 the line-up had already changed slightly, and there have been a couple more departures and arrivals over the years, but that team spirit persists - all band members - Gareth, Neil, Tom, Kim, Rob, Jason and Matt continue the tradition of referencing their surnames as Campesinos! 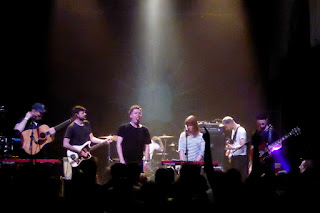 They line up on stage with vocalist Gareth and keyboard player Kim at the centre and drummer Jason to the rear. They are flanked to the right by bassist Matt and guitarist Tom, and to the left by Neil on guitar and Rob on keyboards and percussion. Gareth informs us that the previous night's gig in Brighton had been followed by an extended drinking session, and managed to get in the first football reference with a gentle tease about Brighton's promotion and their manager Chris Hughton (He later went on to wish us well in our next day 'totally pointless' match against Queens Park Rangers). The bonhomie continues with references to the night's WWE wrestling bout at Epic Studios, and with the news that the band much prefer Norwich Arts Centre to yet another well-known city venue.

But what of the gig itself, I hear you ask? Well, it was everything and more that you would expect from this committed and thoroughly entertaining outfit. Starting at 9:30 and playing right up until the 11:00pm curfew, Los Campesinos! start with Renato Dall'Ara (2008), the opening track off the new album, but then plunder the back catalogue mercilessly to bring us all the favourites - songs like My Year In Lists; We Are Beautiful, We Are Doomed; Romance Is Boring; and Hello Sadness. It is a set that reminds you just how much this band has developed in its ten-year history, moving from the realms of indie twee-pop to something at times much darker and socially-aware. Whilst still not overtly political, Matt's pro-NHS t-shirt and Gareth's introductions to new songs like A Slow, Slow Death, demonstrate exactly which mast their colours have been nailed to. 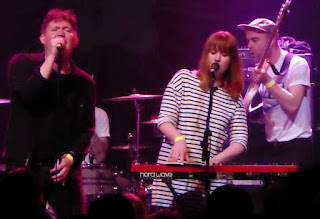 It is a lively, at times, boisterous crowd that is whipped up into a frenzy, and at one point Gareth has to remind the 'big boys' to watch out for the smaller ones at the front. But this is really just a reciprocating appreciation by this Norwich crowd for one of their favourite returning acts. And, whilst exhuberant and energetic, it is worthy of mention that the band are still happy to perform without stage barriers, and even given security staff Annie and Jordan a special shout-out for their subtle, yet effective, stewarding. 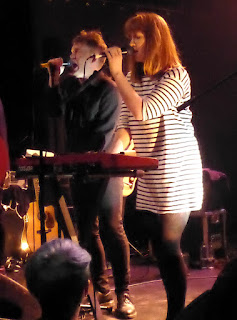 The encore, which takes us right up to the wire, curfew wise, is a delightful trio of numbers - The Fall of Home (from Sick Scenes), the obligatory You! Me! Dancing!, and finally one of my personal favourites I Just Sighed. I Just Sighed, Just So You Know.

We are all Campesinos! tonight.

Support came from impressive punk-trio from Exeter, Muncie Girls. Fronted by bass-playing vocalist Lande Hekt, and accompanied by guitarist Dean McMullen and drummer Luke Ellis, the band presumably get their name from a line in the Coen Brothers film, The Hudsucker Proxy, where Tim Robbin's character , the naive Norville Barnes from Indiana, disbelieving finds out that undercover reporter Amy Archer (Jennifer Jason Leigh) is a Muncie girl. 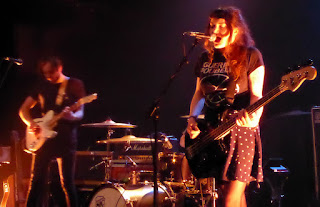 Muncie Girls have been together since 2012, and last year released their debut album From Caplan to Belize. With its Sylvia Plath referencing, this band is obviously influenced by American literature, although lyricist Hekt states that she was not well-read at school. They remind me a lot of Norwich's own Claws, although with Ellis' drumskins tightened to a blistering tautness their sound is incredibly percussive. Political, earnest and well worth listening to. 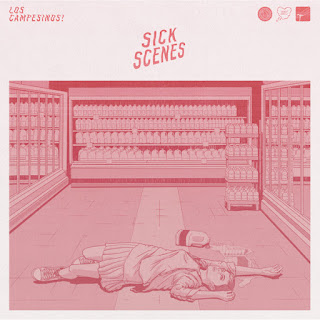 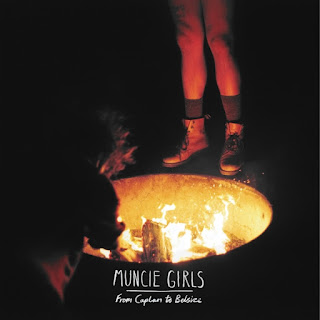