Calan on Tour - and there's Some Welsh Folk in Town 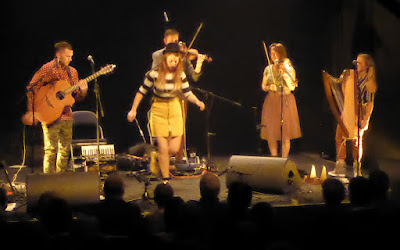 It's been a busy day, and I have had to process a quick turn-around in order to get down to Norwich Arts Centre in time for tonight's appearance from Welsh contemporary folk ensemble Calan. I've been over at the University of East Anglia to take some pictures of Anthony Gormley's recently installed 'Another Time' figures, and then spent the afternoon invigilating at this year's Norfolk and Norwich Open Studios taster exhibition at The Forum. It's been a funny old day. I have been snowed on, hailed on and rained on, and this is the last week in April. But neither weather nor tight schedules is going to make me miss this gig. If these five youngsters can endure the journey across from Wales to Norwich the least I can do is clamber onto my motorbike and drive the six miles to the Arts Centre.

I arrive just as opening act, Dan Wilde, is performing his first number. Although now living in Cambridge, Dan arrives in Norwich as support act to Calan on all English and Scottish dates for this tour. However, it is clear that many of tonight's audience are familiar with Dan's music, remembering him from the Cambridge Folk Festival, or from appearing with The Willows last year at The Portland Arms. 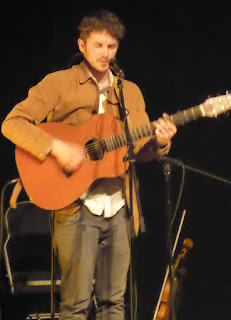 Casually dressed, and delivering a set of personal and honestly written songs, Dan appears relaxed and at ease with tonight's seated audience. Each number is preceded with an introduction that contributes a few more insights into his back story and experiences. There are songs about life's setbacks - like getting a £50 parking ticket after spending all day delivering telephone directories ('Abusing My Position'); there are songs inspired by his wife's literal translations of native Russian expressions ('Windy Head'); and there are hearwarming stories of meeting his two-year old niece for the first time. There's even a story about how his grandmother met her grandfather ('Hammersmith Palais'), although even he is now unsure of its voracity.

There has never been a shortage of guitar toting folk singers, but few do it with the charm and sharp observation of Dan Wilde. Not surprisingly, Dan is doing a brisk business on the merch stand during the interval as I make my way to the bar to get a beer.

My grandparents used to live in Swansea, and I remember what a long journey it was as a child, making our way from Lowestoft on the epic journey to reach Wales. Half a century on, and the roads may be slightly better, but it hard to think of a music venue further away from Calan's spiritual homeland. 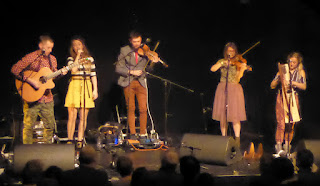 Five youngsters who met originally whilst students at Cardiff University, Calan have released three albums since 2008, and are now touring to promote their fourth, 'Solomon', released less than two weeks ago. Their blend of traditional Welsh folk music, played on a mixture of accordion, guitar, harp, welsh bagpipes, fiddles and pipes, and supplemented with gorgeous vocals and displays of step dancing from accordion player Bethan Rhiannon, brings folk music bang up to date with rock and hip-hop influences from guitar player Sam Humphreys. Harpist Alice French gives her instrument an almost rock and roll credibility wearing it slung from her body via a shoulder strap, and Sam beats out hip-hop rhythms on his guitar body that are then fed through a loop. Yes, this is contemporary folk at its best. 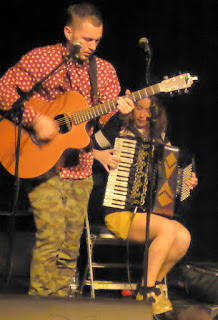 But then Patrick Rimes produces a traditional Welsh pibgom, a reeded wooden pipe grafted onto a bull's horn, and switches from bagpipes to fiddle to whistle, all within the space of one song. Fiddle player Angharad Jenkins rues the fact that there are no Welsh speakers in tonight's audience, but includes a moving extract of poetry written by her father Nigel Jenkins that beautifully describes the Welsh landscape and culture. I instantly feel proud to claim my grandmother's Welsh lineage sown amidst my East Anglian roots. 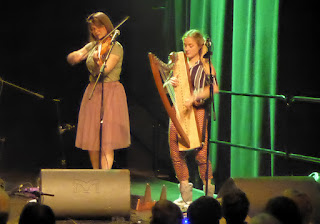 There's a medley of tunes called Ryan Jigs, dedicated to Wales' success in last year's European Championships, beautiful lullabies dedicated to a friend's baby, stories about being held in a cell at Chicago airport, breathtaking step-dancing, and a tragic tale of a young Welsh girl taking her own life rather than bring shame on her family - sung beautifully in Welsh by Bethan. Her voice reminds me of Annie Haslan, from the seventies classical prog-folk fusion band Renaissance, and the rounded vowels and fricatives are as contemporary as, but smoother than, Cery Matthews of Catatonia. 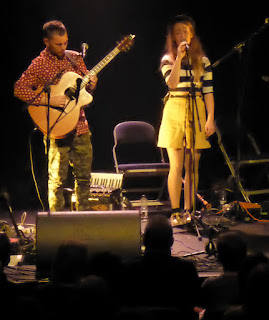 The only slight criticism of tonight's performance was the absence of any space to get up and dance. Somehow, hand-clapping alone cannot not deliver sufficient or adequate expression in response to the energy of Calan's playing, and whilst many of tonight's audience would not have wanted to give up their seats, it was also clear that many felt constrained by the inability to get to their feet.

It was nice to see the members of the band happy to chat and sign CD's at the end of the show, and once again sales seemed brisk. Calan certainly won Norwich over tonight. Hopefully we will not have to wait too long for a return visit.