When the teaser announcements for this year's Norfolk & Norwich Festival came out, there was only one ticket that I simply had to buy, and that was to see Icelandic neoclassical composer Ólafur Arnalds. Better known to most as the creator of the stunning music accompanying ITV's 'Broadchurch', Ólafur actually started his musical career as a death metal drummer with Icelandic band 'Fighting Shit'. We should be therefore eternally grateful that his grandmother introduced him to the piano and the music of Chopin.

First on stage, and taking his place at the grand piano, was Frederico Albanbese, an Italian composer from Milan, who also plays clarinet, guitar and bass, but tonight restricts himself to the keyboard. Tonight was a solo performance of beautiful piano music from his solo album 'The Houseboat and The Moon', delicate, floating and, as my grandmother used to say, 'not spoilt by too many notes'. Only at one point, when the drum loops initially came in on 'Queen and Wonder', did the sound balance threaten to destroy the peace and tranquility of his playing.

Ólafur took the stage after the interval, complete with string quartet, two horn players and trombone player (who doubled on drum pads and effects). The band were dressed all in black, and with a minimally lit stage, all eyes were on the pianist as he started his set.

The first track was almost indistinguishable from Albanese's previous set, so well matched was the support act to Arnald's delicate compositions. Gradually the strings were introduced, followed by the horns, and the sound swelled to a muted crescendo as the smoke machine and green lighting produced a stage effect not unlike an ambient version of  'Fungus The Bogeyman'.

Ólafur, it appears, is suffering badly with the 'flu. We later learn that this gig was almost called off, as he was finding it hard to concentrate, let alone play piano with both hands and simultaneously deal with a running nose. Vocal interludes are therefore kept to a minimum, at least until vocalist and collaborator Arnór Dan is introduced in the second half of the set to contribute beautifully floating alto tones to songs, including the under-appreciated 'So Far' from Broadchurch. Used for the closing credits of the television series, it appears that Arnór never got to hear his own vocal part broadcast, as the ITV continuity announcer would cut in every week to give details of programmes 'coming next'. Tonight we get to hear his voice in all its beauty.

An encore is demanded by the standing audience at the end, and duly delivered. The full band returns for a rendition of 'Near Light' , followed by 'Lag Fyrir Ömmu'.  the heartfelt solo tribute to Arnald's late grandmother.

Now, perhaps, Arnald can put Broadchurch to bed for a while. Whilst the television series has undoubtedly widened his audience, and garnered recognition for this talented player and composer, hopefully the other projects, for example his band Kiasmos which is appearing at Latitude later this summer, and his 'Chopin Project', a collaboration with German-Japanese pianaist Alice Sara Ott, will allow to him to be known as more than just 'The Broadchurch Man from Iceland'. 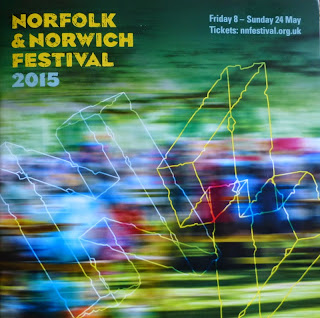 For full details of the Norfolk & Norwich Festival, and to buy tickets, visit http://www.nnfestival.org.uk/

For news of Ólafur Arnalds' other projects visit http://olafurarnalds.com/
Posted by auckers at 01:54