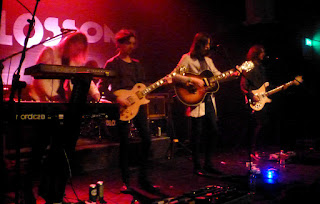 Blossoms is a band that likes to try and do things different. No sign of the fan bus tonight, though. The band had laid on a vintage coach the previous evening to take a crowd of local fans on a 'big night out', leaving the Stockport pub that shares their name and taking them to their Village Underground gig in London. All in ticket price? A tenner!

The indie five-piece that seem to have one eye on the all-inclusive day-trip are in Norwich to show us their wares, which, until the album is released, currently consists of two EPs and a couple of singles. However, they have already assumed the crown of best new Manchester band, and the current tour ends with a sold out homecoming gig at the Ritz next Saturday. They have even invented their own sub-genre, something they have called 'Ethereal Nostalgic Sonnance'. Basically, that appears to be a bit of Oasis swagger, a sprinkling of Jim Morrison mystique, and a generous helping of catchy songs and guitar licks à la Coral.

Maybe it was the post-euphoria comedown from having their away fans with them in London the previous evening, or perhaps Norwich wasn't quite sure what to expect of Blossoms, but the expectation from the audience seemed a little subdued, and the band themselves seemed quite happy just to run through their set without the need for too much energy being expended. Tom, Charlie and Joe on guitars seemed quite happy to line up on stage in a neat row, sometimes bending the knees a little and transferring their centre of gravity back a tad to strike a rock and roll pose, but for the most part fairly static. If anything, there was more movement coming from Myles on keyboards than from the three up front.

Which was a bit of a shame. Combine that with slightly muffled vocals, and the whole experience really did not do justice to the quality of their material, and their playing ability and 'Sonnance'. 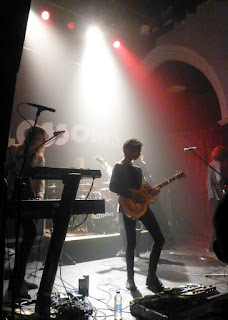 Support from newcomer Declan Mckenna demonstrated an emerging talent, but still in the early days of live performance. His largely home-recorded material seemed quite complicated to perform live, juggling guitar and vocal duties with programmed synths, drum machine and looping. The result was that we hardly saw his face during the entire set, the head-down concentration compounded by the floppy fringe. Nice vocals, though, and a promising range of material. 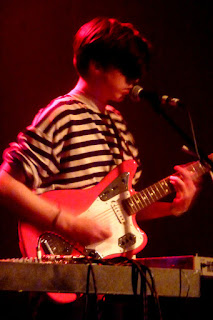 Local boys Teen Brains did impress, however. I hadn't seen them perform live since March, and their live sound has matured enormously over that period, now sounding far less surf-pop and much more meaty rock and roll, particularly the bass playing, whilst Tyler's vocals are beginning to really come together with more depth and control. Please can we have a CD soon boys. The cassettes are lovely, but something to whack into the car player would be nice. 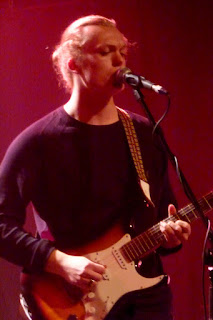 Teen Brains
Posted by auckers at 06:23