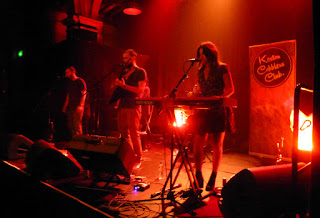 Norwich used to have a thriving shoe and leather industry -  at its peak 26 factories employed over 12,000 people, and manufactured over 7 million pairs annually. Brands like Bally, Van-Dal, and Norvic were all produced within our fine city. Start-Rite received their Royal Warrant from The Queen in 1955, and I still remember noticing the graffiti crudely scrawled on the wall of their Mousehold Lane factory around the time of the Silver Jubilee, a crudely scribbled 'COBBLERS TO THE ROYAL FAMILY'.

This may have little to do with indie-folk music, or even the NME Best Small Music Venue, Norwich Arts Centre, but I have been drawn here tonight by the intriguingly named Keston Cobblers Club, supported by Wildflowers, a band I saw supporting Tom Odell at the UEA about two years ago.

Whilst I am aware of and familiar with several other musical 'clubs' - Bombay Bicycle Club, Two Door Cinema Club, Slow Club, and even a punk band I was briefly involved with at college, Baby Seal Club, most of these give away little from their names as to what to expect music-wise. Indian cuisine, film soundtracks and aquatic mammals were all, as far as I remember, noticeable by their lyrical absence or influence.

So, what of Keston Cobblers Club? Do the good people of Kent provide sufficient authentic inspiration to justify the podiatric moniker of this popular five-piece, other than the wonderful title to one of their songs 'We Will Heel Your Soles'?

Well yes actually. There really was a 19th century violin-playing cobbler who entertained drinkers within the taverns of Keston, and it was his story that inspired Matthew Lowe, one of the founders of the band, to celebrate and resurrect the story via the band's name.

As well as Matthew Lowe, his sister Jules and long-term friends from primary school Tom Sweet and Harry Stasinopoulos, there is now also classically trained tuba player Bethan Ecclestone on board. 'Wildfire', released this summer, is their second full-length album, and took the band beyond their brassy folk beginnings and into the territories of pop and indie-folk popularised by the likes of Of Monsters and Men. This was their third visit to Norwich Arts Centre, and they have already delveloped a loyal following up here in Norfolk.

First up, though, was Brighton/Bristol based 'Wildflowers' (without a 'The'). Described in their own publicity as 'bastard children of Fleetwood Mac and The Eagles', these guys have always portrayed themselves as free spirits yet seem to have nailed their influences firmly to the mast of Americana, even to the point of recording their debut album, 'On The Inside' in Detroit. I loved their performance two years ago when I saw them at the UEA, but was slightly disappointed when the album came out. It seemed to have rinsed out their authentic West Country charisma, even though the songs were still strong and instantly memorable. However, tonight's support slot totally restored my belief in them. Their setlist was pretty much unchanged from two years ago, and they seemed to have lost guitarist Kendal Sant for this tour, but the energy and chemistry between the two beer-swilling Bennett sisters and the surviving male James Ashbury simply exuded warmth and committment. Some of Siddy's stage posturing was a little full-on for a small venue like Norwich Arts Centre, but at least she'll be ready for the O2 Arena or Wembley. 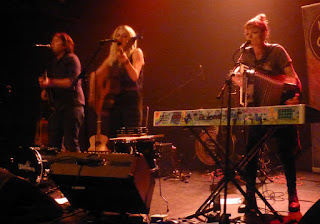 Keston Cobblers' Club followed up with an impressive set, with a lovely balance of brass, accordion, keys and guitars, and Matt and Jules' harmonies effortlessly interweaving with the rest of the band. There's a hint of Mumford-first-album at times that certainly lifts proceedings above the niche appeal of die-hard folkies. There's an awkward pause whilst a set of batteries need replacing - no point in asking a Norfolk audience for a joke or funny story, that's your job in such circumstances, but all is well as the tale of Siddy (from Wildflowers) tipping her lager into Bethan's tuba at last night's London encore is regaled in the nick of time. Standout tracks for me included 'St.Tropez' and the title track from 'Wildfire', but still love 'We Will Heel Your Soles' and 'Maybe We'll Be Heard'.

After finishing with 'Dun Dun Dun' we are entertained with an encore from the floor with a wonderful version of Toto's AOR classic 'Africa', conjuring up more equatorial atmosphere than the American original ever mustered, and with Siddy Bennett keeping her beer in it's can and out of tuba bells as Wildflowers join the audience and band for one last stomp. This is one club I shall definitely be joining.

Buy 'Wildfire' from Keston Cobblers' Club's website at http://kestoncobblers.club/ or from Amazon or i-Tunes 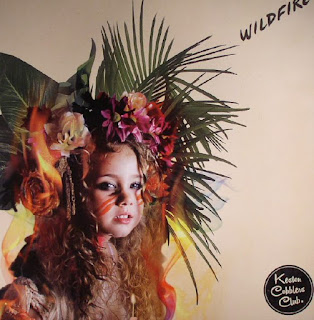 Similarly, Wildflowers' album 'On The Inside' can be purchased via their website at http://wildflowersband.co.uk/, as well as Amazon and i-Tunes. 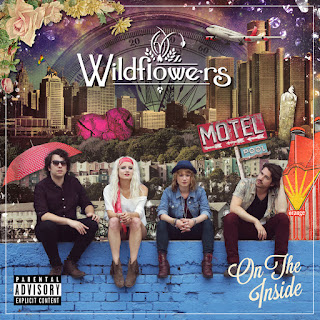