And I'd like to dedicate this review of The Staves' gig at Norwich Arts Centre to... James Canty. 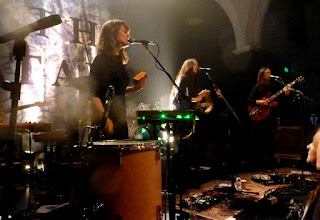 It is not often that a support act threatens to upstage the headliner, especially when said support act is actually part of said headliners' backing band. But more of that later.

It is Hallowe'en, and I have ventured from my traditional 'lights-extinguished-and-curtains-drawn pretending-I-am-out' anti 'trick-or-treat' policy, and have really, genuinely, actually gone out for the evening. Alongside 290 music-loving ghoul-avoiders I am rammed into the 14th century converted church that is the Norwich Arts Centre eagerly awaiting The Staves kick off their Autumn tour.

It's a few years since the Staveley-Taylors regularly performed for the open-mic nights at The Horns in Watford, and three years since they survived another summer of festivals to release their debut album 'Dead & Born and Grown'. Riding the renaissance of contemporary folk-pop and buoyed by the waves of success of Mumford and Sons and Laura Marling, the album did well, and The Staves first appeared here as headliners in April 2013.

Now they are back, older and wiser and with the traditional 'difficult-second-album' out of the way. They now have a four piece band in tow (including the afore-mentioned Mr Canty, but more of that later), and their own sound crew and techies. Quite an entourage for a small church in Norwich to accommodate. The first thing we learn, apart from the sisters' view that Hallowe'en, like Macdonalds, is now way too commercial and too American, is that the tour bus has been parked up the last two nights in a less than salubrious riverside location close to the football ground. However, it has provided the girls with a chance to explore our fine city, and so they are rested and raring to go with tonight's show. 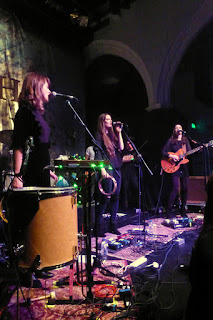 They perform all but one of the songs off the new album, including 'Hopeless' which now appears on the extended version. I love everything off the new album but it only leaves enough time for 'Mexico', 'Eagle Song' and the beautiful 'Winter Trees' from Dead & Born. The arrangements are all hermatically tight, and the harmonies are every bit as exquisite as we have come to expect, although the introduction of  looping is a shame. Technically justified perhaps, but it somehow detracts from the purity of the girls' voices. There's a cover of Bombay Bicycle Club's 'Feel' and 'America' from the 'Blood I Bled' EP is thrown in for good measure. Appropriately, every number is dedicated to James Canty. But more of that later.

There are young children in the audience, so I'm not surprised that my personal favourite, 'Pay Us No Mind', doesn't make the cut, although do I miss that angelic delivery of  "Fare thee well, I don't give a fuck anymore". Still, there's a surprise awaiting us in the encore with a consoling new song, the heartfelt lament, 'Tired As Fuck'. 'Teeth White' ends, and then it is into the bar to collect our trick-or-treat sweets, and make a donation into the band's Syrian refugee collecting box. 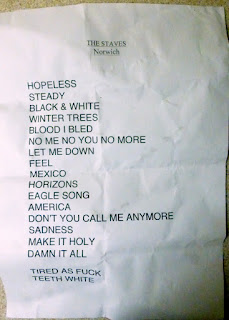 And, finally, a quick word about tonight's support act, James Canty. For those of you who failed to arrive in time to hear him dedicate every single song of his set to The Staves, well I'm sorry but you missed out. Better luck next time!!!

The 'If I Was' tour continues into November, finishing with a sold out show at London's Roundhouse on the 9th. Full details on their website at http://www.thestaves.com/ , including a link to a free download in exchange for joining their mailing list. 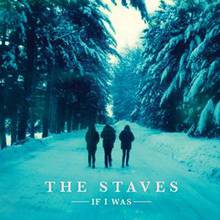 James Canty, who jokingly apart, is actually very good and has an EP available, can be found on Facebook at https://www.facebook.com/thisisJamescanty/ . Looking like a cross between James Bay and Dave Hill (from Slade), his guitar work and poetic delivery is reminiscent of Richard Digance, Jake Thackray and Steve Harley. Very talented.
Posted by auckers at 04:54

Email ThisBlogThis!Share to TwitterShare to FacebookShare to Pinterest
Labels: Halloween, If I Was, James Canty, Norwich Arts Centre, The Staves