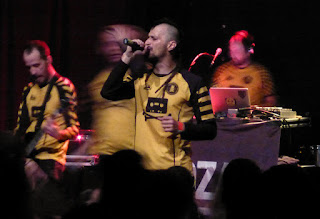 I wasn't really sure what to expect from Bosnian dub-rockers Dubioza Kolektiv. I knew that the band formed out of the turmoil that existed during the siege of Sarajevo during the 1990's, through which the founder members lived as children. They have released six albums since 2004 and toured relentlessly, as well as being politically active in their homeland, organising demonstrations and mobilising young voters against what they saw as corrupt government. Now, in 2015, they have played Glastonbury and are nearing the end of a string of live appearances in the UK which included two sold-out nights at London's 100 Club. Tonight, on a cold Monday evening, they played Norwich Arts Centre, not exactly the Wild Wild East (name of their 2011 album release), but probably the most easterly of their UK dates.

Support comes from Savage Island, a local band that has emerged from the ashes of Juke and the All-Drunk Orchestra. The name may be shorter, snappier, and form more easily into a drumskin logo, but perhaps loses some of its predecessor's charm and individuality.Which is a shame, as they really put in an excellent set. I had not previously seen them, and if you had told me that they were from Eastern European and were touring with Dubioza, quite honestly I would have believed you. Their music is an amalgam of spirited drumming, primal screaming, great rock vocals, bass playing that could at any minute launch into Electric Six's 'Gay Bar', a brass section that can switch from Cossack rhythms to KC and the Sunshine Band funkiness at the flick of a switch, and some great songs. Despite starting to an almost empty auditorium (shame on you, bar lizards) they ended to much dancing and enthusiasm. Definitely want to see them again. 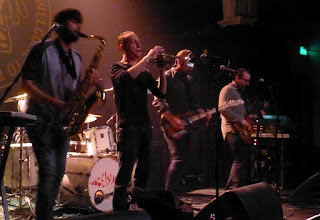 After clearing the stage sufficiently to create room for Dubioza - the drumkit is pushed right back and screened, the MC decks are also well to the rear. There are no mic stands, and even audience drinks are ordered off the edge of the stage. And when the eight-piece collective, in co-ordinated  yellow and black tops, bound onto stage you can see why. Every square centimetre of space is going to be needed for this level of pent-up energy. From the start of the opening number to the final bars of their set, the stage becomes a maelstrom of circling bodies, waving arms, and energised posturing. With Adis and Almir charging back and forth, taking alternate verses on vocals, and everyone else wanting a piece of front-of-stage action, nobody's pint would be safe, even for a second. These guys have the energy of an entire doped-up cycling team - it's like a team of Lance Armstrong doppelgangers with funny haircuts. 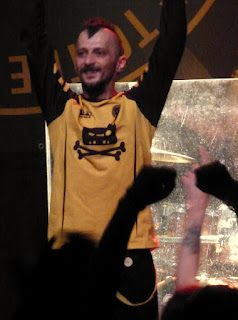 Interestingly, for a band with such a political pedigree, there is very little mention of politics tonight. Even a chant from the crowd of 'We Love Bosnia' is rebuked with a reminder that the band now also contains members from the neighbouring states of Serbia and Slovenia. Only when they perform  Free.mp3 (The Pirate Bay Song), and produce a pirate ship banner to reinforce the logos on their t-shirts, does their antipathy towards capital exploitation of musical downloading raise its head. Sorry guys, but I'm with the artists on this one. Creative expression is all well and good, but a musician still needs to be paid for his or her intellectual property in order to eat. However, it's undoubtedly a great novelty song, with an hilarious video to accompany it. 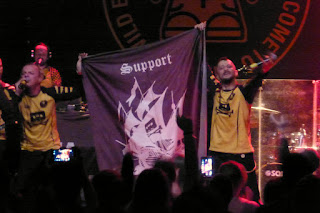 And that, I'm afraid, is where I have to draw my line in the sand with Dubioza Kolektiv. On the basis of last night's performance they are great entertainers, and the audience loves them, culminating with a mass stage invasion, mostly at the band's own instigation, to a backing track of Prodigy's Out of Space which follows a rather cheesy encore of Can't Take My Eyes Off You, complete with more collective arm waving. It's the sort of post-fondue entertainment that goes down well with the après-ski set in Val d'Isère, but risks reducing Dubioza to the realms of cabaret. Which is such a shame for a band that has such a great collective conscience and a message to spread. 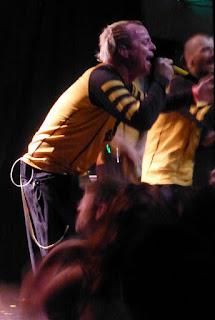 As bands like Gogol Bordello have found, there is always room at the inn for a lively infusion of Balkan and gypsy rhythm with rock music, but unless you are prepared to nail your political convictions firmly to the mast as well, your preaching will not get through to your audiences. Or, perhaps now that we have Jeremy Corbyn they no longer feel that we need their help.

Follow Dubioza Kolektiv via their website at http://www.dubioza.org/ , and do watch the video to Free.mp3 (The Pirate Bay Song) :-