Seafret - A new name to play with? 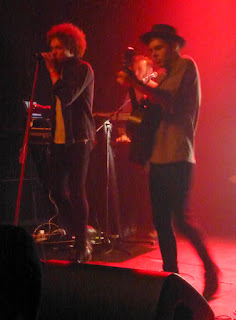 It seemed the right thing to do. After the horrific attacks in Paris last Friday we were looking for a symbolic gesture of defiance to show that we will not allow a crazed group of psychopathic killers to threaten our way of life. Those in Paris could take to the streets, and vigils were held throughout the world as the blue, white and red lights illuminated landmark buildings in a mark of solidarity and respect. In this country the decision to carry on with the scheduled soccer friendly at Wembley between England and France was seen as a unifying opportunity for us all to sing La Marseillaise in fraternal friendship. Here in Norwich I desperately wanted a gig to attend, just to show that no fundamentalist was ever going to destroy my passion for music. The opportunity came on Monday night, at Norwich Arts Centre.

Seafret was a name that was new to me. Sounding a bit like a shipping container company, and having just the right combination of vowels and consonants to convince Countdown contestants that there surely would be a seven-letter word with which to reap the bonus points (there is one - 'feaster', as I don't think 'Freesat' would be permitted), this duo from Bridlington would provide me with my tribunal of solidarity. 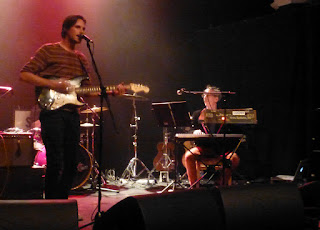 Cove Hithe open the evening with the same three-piece line-up that performed at the Millenium Library earlier this Autumn as part of Norwich Sound and Vision. This means that multi-instrumentalist Matilda Pendered is again missing, leaving Jay Ducker to perform upfront. With the news that Rory is tonight making his last appearance on drums before taking off to Canada, the band could be in danger of turning into a solo act accompanied solely by the strange retro-keyboard player who looks strangely like an East Coast Ron Mael. The songs are still beautifully delivered, though, and with the band now proudly claiming to be Norwich-based, I'm sure it won't be long before we see them again with 'Till back in the fold., and with a replacement drummer. 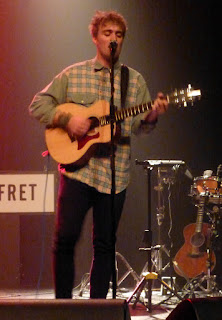 Martin Luke Brown, from Leicester, is next, and one of a exclusive band of Musical Martins that, despite my furrowed head-scratching, can only remember Martin Kemp from Spandau Ballet and Martin Gore from Depeche Mode as fellow members. He sports a shaggy hairstyle and a cracking line in shirts, so when he starts playing his red Nord keyboard and singing with a soulful voice and extraordinary range that pitches him alternately between Stevie Wonder and Olly Alexander from Years and Years, I am somewhat surprised. The beauty of the Nord is that it is also an incredibly versatile instrument, so Martin becomes almost funky on 'Scars On Scars', then abandons the keyboards in preference for acoustic guitar to deliver a Sheeran-esque version of 'Knife Edge'. He more than holds his own during the set, and is certainly a name to remember. The music world needs more Martins.

With a powerfully lit box sign proclaiming their name at the back of the stage we are in no danger of forgetting the lexicographers' favourites, Seafret. Playing tonight with backing from drums and keyboards, Bridlington's Jack Sedman (vocals) and Harry Draper (acoustic guitar) are attracting a fair bit of attention ahead of the Spring 2016 release of their debut album. Up until now we have had the EPs 'Give Me Something' and 'Oceans', which have been championed by both Huw Stephens and Zane Lowe. With a name that refers to a mist that rolls in off the North Sea, and Bridlington's rich maritime history and shellfish trade, one almost expects Seafret's music to be a combination of traditional folk and sea shanties, however much they look like a youthful Simon and Garfunkel (although Harry looks slightly more Pete Docherty than Paul Simon). The truth is, with Sedman's vocal abilities, and the strength of the songwriting, the result is reassuringly contemporary, but with the pedigree of past masters like Coldplay and Bon Iver to hold up as comparisons.

It is a combination that works well. Sedman sings and does all the talking, whilst Draper looks cool and plays his guitar. They seem somewhat bemused by the non-committal reaction of the Norwich Arts Centre audience. As each song is met with earnest yet polite applause Sedman is prompted to comment that he "can't quite make you lot out". There's no encore, just an invitation to write a contribution in their tour book, and obviously to buy some merch. 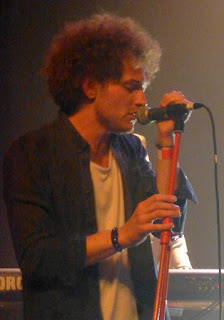 The evening has served it's purpose for me, and I have made the point of coming out to listen to live music, and will always do so. Our cultural institutions and traditions are too important to be lost through fear or intimidation, regardless of how the politicians dance around the protocols of dealing with the terrorist threat and combating ISIS. Let us hope that the performing arts will continue to unite people of all faiths and creeds, and that the events of last Friday will actually result in a greater mutual understanding and determination to share our cultures.

Seafret have a website at http://www.seafret.com/ and you can even see Maisie Williams (Game of Thrones) in their video for 'Oceans' -

Martin Luke Brown has a website http://www.martinlukebrown.com/ complete with a link for a free download of 'Nostalgia' in exchange for signing away your soul.

Cove Hithe also have their own web thingy at http://cove-hithe.co.uk/ , or you can like them on Facey-B at https://www.facebook.com/covehithe?fref=ts .  If you are lucky you may still be able to pick up a vinyl/CD dual package of their 'Your Ground Is My Earth' release for the bargain price of £5. Yet another reason why I will probably end up buying a record player after all.