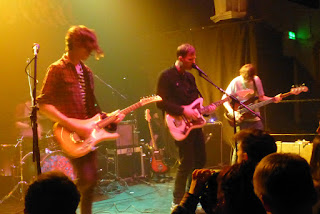 So, it appears, every year produces a crop of bands who, having been given the green light of credability and the confirmation of cool by the music press, take to the festival circuit knowing that they already have sufficient buzz of anticipation to attract a crowd. We all love that smug feeling when, several years later, we can brag in the pub of how we remember seeing the latest stadium slayers when they played that tiny stage at such and such a festival. 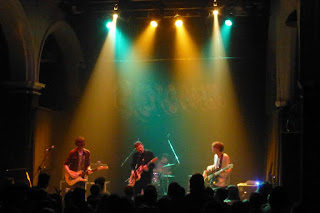 This year's crop of new next-big-things included north London four-piece Gengahr who had booked a slot on the opening day in the woods on Latitude's i-Arena, having debuted on Huw Stephens' Lake Stage the previous summer. Unfortunately I missed them both times, opting instead this year to stake my colours to the mast of the US act Tor Y Moi. First rule of festival clashes - try and work out who will be least likely to play East Anglia again soon.

Sure enough, my hunch paid off, and tonight Gengahr are playing Norwich Arts Centre, mid-way through their first headlining tour of the UK before heading off to Europe in ten days time. 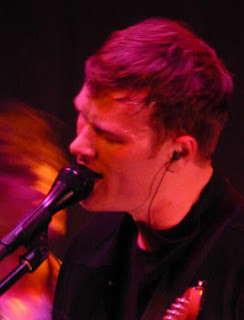 A forty five minute set is just about long enough for a band with a debut album to run through all the tracks without having to stretch themselves, and that is essentially what we got last night. No extended solos or cover versions, just a live skim through of 'A Dream Outside' and the 'Tired Eyes' EP, but saving their best loved song 'She's a Witch' for the encore. The reception from Norwich is warm, but not ecstatic, but then Gengahr are a band to listen to and nod your head to rather than lose inhibitions and complete control of arms and legs, or to attempt to get a mosh going. John Victor's shredding guitar work is what drives the band's sound, and gives it the slightly psych feel, but balanced with pop sensitivities and vocal harmonies. Sometimes they begin to sound a bit too much like everyone else, whether that be MGMT, Metronomy or Tame Impala, and the start of 'Heroine' is frustratingly similar to Stereophonics' 'Pick a Part That's New'.

Ultimately, though, unless you happen to be a fan of the falsetto vocals favoured by bands like Wild Beasts, Everything Everything and Alt-J you are never going to really get into Gengahr. Personally, I think that when it comes to songs within that vocal range the girls do it so much better. But if you prefer your male singers to be less gravelly and basic, then you can file Gengahr under the above.

Two very impressive supports kicked things off last night, starting with the excellent London-based Pumarosa. Reminding very much of the glory days of  Kosheen, but plucked out of the hippy commune and deposited into an urban industrial wasteland, this indie but trip-hop influenced combo pull together thumping bass, powering synths and a gothic/pagan manifesto that is visually mesmerising as well as infectiously danceable. Isabel Munoz-Newsome on guitar and vocals throws some pretty sacrificial shapes herself , bowing her guitar with a drumstick at one point before ending their set with the memorable, and highly appropriate 'Priestess'. Stylish and slickly presented. 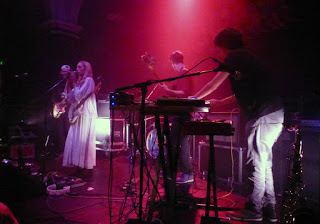 
Cash+David (almost an ironic piss-take on chirpy Cockney duo 'Chas and Dave', but apparently it refers instead to Johnny Cash and David Bowie) are actually a London electro-pop duo, Tim Ross (Cash) and Liz Lawrence (David) who successfully beef up their sound with expressive and at times gutsy guitar work to supplement synths and drum machine, and for the live performance add a real drummer as well. Lawrence is the undoubted lead presence on stage, but as yet seems to lack the confidence to really push herself forward and engage with the crowd. Punching well within their weight, and taking leaves out of the books of both La Roux and Chvurches, Cash+David have a lot more than just Rabbit up their sleeves, especially with tracks like 'Bones' and 'Pulse'. 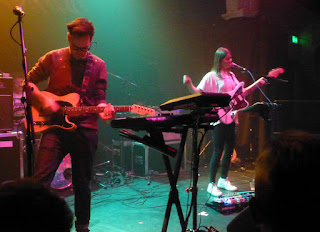 So, as the tour moves on to Cambridge I am left with my mind unchanged over Gengahr (they did pretty much what I had already read on the side of the can), but totally impressed with Pumarosa and Cash+David. And that is why I go to all gigs with an open mind.

Gengahr's album 'A Dream Outside' is available on Transgressive Records, and have their website at http://www.gengahr.com/