Norwich Sound and Vision 2015 - Get Ready for The Launch 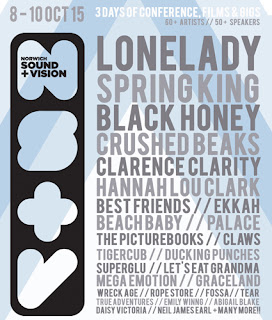 That advertising campaign which proudly proclaimed that their product did 'exactly what it says on the tin' had a point. So. Norwich Sound and Vision? It's in Norwich, yes? Yes. It's a three day industry shindig for the music and film and multimedia peeps, yes? Well, yes and no.

Certainly it attracts a lot of local, national and even international media types to attend the conference sessions, and to sniff around the local music scene, as well as the cool and up and coming bands brought into the city by the event's music programmers. But it does so much more than that. It creates a three night festival vibe in the city through a series of gigs and showcases, accessible either through individual ticketing, or via a three-day wristband. A bit like Brighton's Great Escape, but with a much more generous nod to the city's genuinely local artists.

I first attended NS&V two years ago, having previously been under the misapprehension that it was primarily an industry bash. I saw Claire Maguire and We Were Evergreen at Open, and Drenge and Superfood at Norwich Arts Centre. This year will be the sixth NS&V, and to launch the event, and to spread the word that this is not only an industry conference but also a three day music and film festival for the good people of Norwich, a launch party was held last night at Norwich Arts Centre. Featuring a preview of Richard Shashamané's splendid exhibition of photographs taken at Norwich gigs over recent years, and a taster lineup of three very different local bands, this was a chance for NS&V to really reach out and appeal to local music and film enthusiasts to support this year's event. After all, nothing helps promote a local band like an enthusiastic local audience. 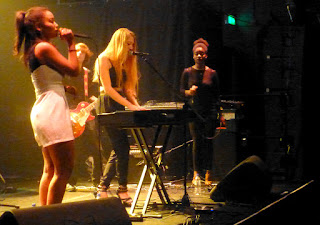 First up was 'Vibe', a three piece vocal harmony group formed via Access to Music that have already been featured on Mustard TV. Performing not only their own compositions, but also a beautifully re-worked arrangement of Beyonce's 'Crazy in Love', this trio showcased their own singing talents, and also an ability to rotate the lineup, with each one of the three girls taking a turn on keyboards. It would have been so easy to fall back on backing tapes and drum machines, but Vibe also chose to be supported with a three piece band with guitar, bass, and drums. My only criticism would be that the guitarist, who I suspect also fronts his own band, did tend to muscle into the spotlight a little too much. A minor point, but it was supposed to be the girls' night. Also, whilst 'Vibe' is definitely one of those Ronseal names that perfectly reflects the band's positioning - a harmonious blend of urban and soul, it could easily become anonymous amongst the plethora of other Vibe brands out there. 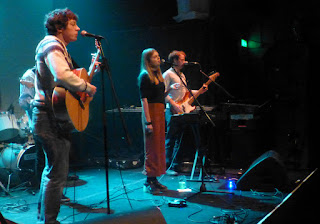 Not that 'Dum Dee & The Goons' are likely to have that problem. Featuring the haunting vocals of Daisy Wilson, this indie-folk five piece mix electric and acoustic with beautifully crafted songs to sublime effect. The strongest song of their set was undoubtedly 'Golden Blue', but the whole performance demonstrated again what an array of diverse talent abounds within Norwich. Whether I would have had the courage to stick with that band name, though? But then I thought Arctic Monkeys was a stupid name, so ya-boo-sucks to me, too. What do I know? 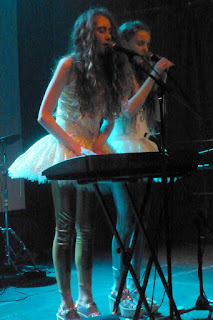 The anticipation about the final band tonight has been growing and gathering momentum over the last two years, resulting in festival appearances at Latitude, Camp Bestival, and Festival No6. They appeared at last year's NS&V, playing at The Birdcage and leaving a lasting impression on shell-shocked A&R peeps and scouts. They almost stole tUne-yArDs' thunder when they supported at The Waterfront earlier this year, and my gob was smacked sideways when I saw them for the first time at Norwich Arts Centre back in March this year. They have, quite simply, the best band name in the history of popular music, and their stage presence has an eclectic weirdness that is both mesmerising and slightly frightening. And, God help us, they are still only sixteen years old. They are 'Let's Eat Grandma'.

Rosa and Jenny have been friends for twelve years, and performing as 'Let's Eat Grandma' for the last two, but their minds now seem to function as one as they work their way through a set that is more than just multi-instrumental musicianship - it is spoken word, it is theatre, it is art. Dressed tonight like a pair of dysfunctional ballerinas from an antique musical box, yet maintaining the innocence of a pre-Raphaelite painting, they start with simple drum machine and synth chords  before layering overlapping vocals to sinister effect. Jerky head movements and sideways glances to each other complete the sense of detachment from reality, and they seem to purposefully avoid any form of eye contact with the audience. It is as if one look could turn us to stone, like a punishing contact with a mythical gorgon. Who knows from where their inspirations come. They are way too young to remember the 'Wuthering Heights' days of Kate Bush, yet there are parallels of idiosyncrasy that remain inescapable. This is truly raw talent but, like a fine Margaux wine, will certainly continue to become even more special with age.

Let's Eat Grandma will be appearing again as part of Norwich Sound & Vision, opening at The Mash Tun on Friday night. 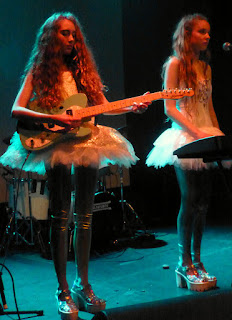 The full programme can be found on NS&V's website at http://norwichsoundandvision.co.uk/ .

Check out the line-up (it is TRULY awesome) and get yourselves a wristband. This is YOUR festival, Norwich. Make some noise!