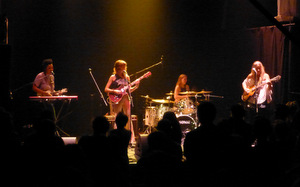 I admit I was a little sceptical and unsure what to make of Rainbow Girls, a female five piece formed in California five years ago. I immediately thought of sunshine, beaches, surf, then San Francisco and the Summer of Love, and finally Hollywood, Los Angeles and all those manufactured bands like Josie and The Pussycats. Was this going to be merely a pre-packaged surfing/hippy/high school prom band sent over to Europe to sell a few records and posters?

Well, first lets correct a few things. Firstly, they are not the product of a large studio or record label. Although they are from California and began by busking around Santa Barbara, they crossed the pond, sofa-surfed their way around Europe writing songs and playing wherever they could. They signed to a specialist agency in the UK called Blue House Music, home to amongst others Marty O'Reilly, Raevennan Husbandes, Lewis and Leigh, and The Black Feathers (all of whom have played the Norwich Arts Centre) as well as Norfolk's own The Vagaband. They have released two albums, both crowd-funded, and although not yet world famous they have headlined their own show at San Francisco's famous Fillmore. Now down to four members after Cheyenne Methmann left for pastures new, they are back in the UK touring before returning to California in October.

Any band that gets to return to Norwich Arts Centre must have made a good impression first time around, and judging by the number of repeat ticket sales they must have made an impressive debut here last year. They are no showbiz divas either, and can be seen mixing with the audience during the support act's set and whilst setting up the stage. They greet photographer Richard Sashamane like an old friend, and he gets a special shout-out later on in their set.

Local favourites 'Feral Mouth' kick off the evening, well four of them anyway. Dobro player Noel is missing, and frontman Jape is sporting a baseball cap and leaving his familiar vaping trail. Banjo player Gareth appears to have lost his trademark John Deere cap. Maybe it is being used elsewhere in the county by a hard-working combine harvester driver. Amazing set as ever, and their last appearance in Norwich this year, apparently. 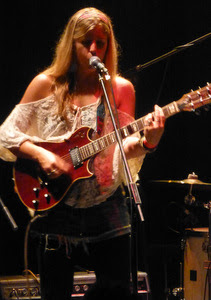 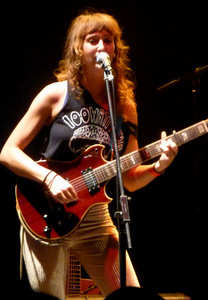 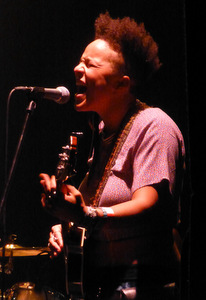 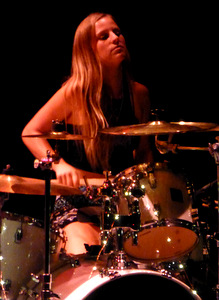 Rainbow Girls receive a big welcome on stage, and within a few minutes I realise why so many have returned to see them a second time. Their stampy style of folk rock, infused with elements of gypsy, americana, funk, soul and good old rock and roll are just the sort of thing a Norwich audience loves. Great playing, beautiful vocal harmonies, and a ramshackle stage banter and a succession of line-up changes that may not always be slick but is always endearing. These are obviously not just great musicians, but great friends also. 'Yuba', from the new album 'Perceptronium' was written on hearing the news that Cheyenne was leaving the band, and displays the bond that clearly still exists between them all. Yes, they are all good looking girls, but it is the musicality and 'joie de vie' that they exude that impresses the most. The track 'No Girls Allowed', again from 'Perceptronium', reinforces the message that all the years of talented female musicians struggling to be taken seriously is now hopefully now a phenomenon of the past. 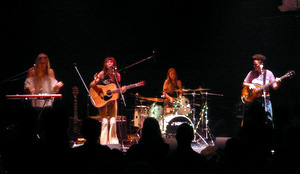 Good luck to Rainbow Girls. I arrived without high expectations, but left suitably impressed. Catch them if you can before they return Stateside. For a list of upcoming gigs, or to buy the albums, check out their website at http://www.rainbowgirlsmusic.com/


Likewise, for information and music from Feral Mouth, go to http://www.feralmouth.bandcamp.com/ or https://www.facebook.com/FeralMouthStringBand