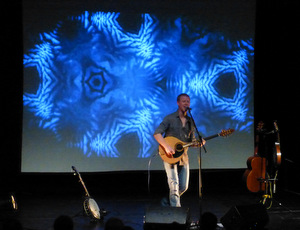 There is nothing new or unusual about an album of cover versions. In my own collection I immediately think of 'Scott Walker Sings Jacques Brel' and Elaine Paige's 'The Queen Album'. In addition, a plethora of albums have been released giving the orchestral treatment to contemporary songs in a 'Classic Rock' style. Entire albums have been re-worked, often as projects commissioned by music magazines like Mojo using lesser known recording artists to re-interpret works by legendary artists like The Beatles or Pink Floyd. What makes 'Hendrix Songs' different from most of these is the methodology which Benji Kirkpatrick, a respected singer songwriter and member of folk supergroup Bellowhead, has adopted in producing an album of Jimi Hendrix songs.

Kirkpatrick acknowledges Hendrix as his first musical icon, and for some time has included Hendrix material in his live sets. What he wanted to do next was strip away the showmanship and the virtuoso guitar work and expose the sensitive songwriting that lay beneath. Mostly using the bazouki, a long-necked Greek mandolin with a sharp metallic tone, as his instrument of choice, Kirkpatrick has taken twelve classic Hendrix songs and re-arranged them as acoustic versions in a folk style that highlights the lyrical beauty of the work. Aided with a grant from Arts Council England, the project has resulted in an album, 'Hendrix Songs', to be released on September 18th. Kirkpatrick is currently touring a show to promote the album, as well as to give some insight into the project. The first night of the tour was at Norwich Arts Centre. 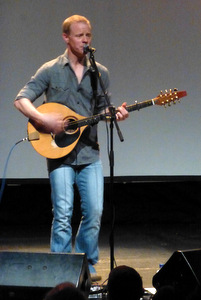 Benji Kirkpatrick performs a show of two halves, firstly a set drawn largely from his own material, followed by the second set consisting wholly of the Hendrix material. Whilst he is an accomplished multi-instrumentalist, switching easily from guitar to bazouki, to mandolin, to banjo, then back again to guitar, his own songs are probably average at best, and this is an audience that is here primarily to hear Hendrix. The applause is therefore polite rather than ovational, which probably does not help to settle an already nervous performer. The delays in tuning each instrument, an irritating (nervous?) cough, and an unrelaxed introduction to each song makes for a difficult first half. 'Flyover' from the album 'Boomerang' is probably his most interesting song, although a bazouki version of the Hendrix instrumental 'Third Stone From The Sun' and a rendition of the Billy Roberts folk song 'Hey Joe' on mandolin manage to keep the audience's attention. (The latter two numbers were excluded from the scope of the Bendrix set by virtue of being an instrumental and a song originally covered by Hendrix.) 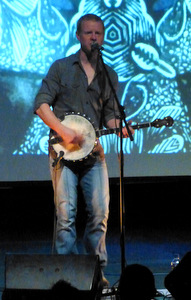 The second half of the show consists entirely of Hendrix material, and included all twelve of the songs featured on the album, largely on bazouki, switching just the once to mandolin for 'Hey Joe' and later, in the encore, to banjo for 'Voodoo Child (Slight Return)'. Interestingly, the set includes some lesser known Hendrix songs, including 'Stone Free' (the original B-side to 'Purple Haze'), and 'Burning of the Midnight Lamp' (the less successful than expected fourth single). The highlight for me is a beautiful version of the love song 'The Wind Cries Mary'. One of Hendrix's most famous recordings, 'All Along the Watchtower' is omitted by virtue of it being a Bob Dylan song. To perform it within the project parameters would therefore have been an example of re-inventing the wheel.

Mention should also be made of the projected artwork commissioned from, and created by, Shropshire artist Esther Thorpe. There was a tendency to over-use the kaleidoscopic treatment of her gentle and interesting designs, presumably to suggest a 'psychedelic' feel to the evening. Personally, I would have preferred to have seen the imagery faded in and out in its entirety more often. The pastel imagery of Hendrix's face was beautifully done, but much of the rest seemed unfairly hidden from us.

Once again in the second half, Kirkpatrick's nerves seemed to be a problem, which is a shame because the fascinating biographical information he delivers between songs comes over as 'stilted factual' rather than 'relaxed conversational'. Put it down to the first night. The playing, though, is impressively virtuosic, and the voice is strong and confident throughout. All in all, an impressive and interesting evening for any fan of either Jimi Hendrix or folk music in general. 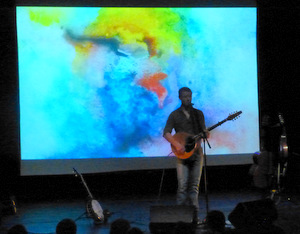 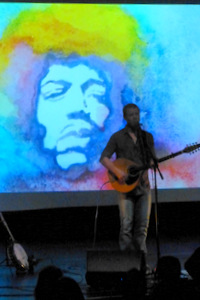 The tour continues throughout the UK, and full details can be found at http://www.benjikirkpatrick.com/index_3%20a.htm , together with more information about Benji Kirkpatrick and his music.