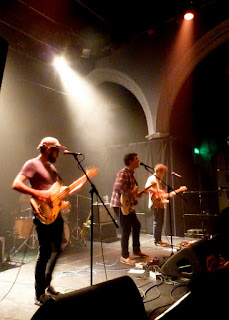 My criteria for picking gigs is similar to my rule for settling festival clashes - acts from across the pond have to take priority. Whilst British bands will tour each successive album release with each visit sliding up or down the venue scale depending on their trajectory, American acts may not return to Europe, let alone Norwich, and so each opportunity to see a new transatlantic act should be grasped with both ears. And so, tonight, I am going to make sure I catch Eternal Summers and Surfer Blood when they play Norwich Arts Centre.

It may be a Monday night, and I realise that the Wombats played the UEA the previous night, and that a lot of sad-acts stayed up until four in the morning to watch the lunar eclipse, but that's no excuse. The Arts Centre should be rammed tonight, whereas it is roughly half-full. But with audiences it is quality that counts, and this crowd obviously share my passion for experiencing something new. 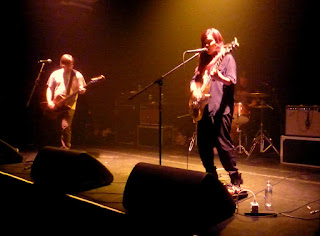 Eternal Summers have been together since 2009, starting as a two piece but fleshing out with the addition of Jonathan Woods on bass three years later. 'Gold and Stone', their fourth album, has just been released, and obviously features in tonight's setlist. Vocalist Nicole Yun has one of those voices that lulls you with feathery sweetness before switching to raw aggression without so much as a flick of the hair. Her guitar work is drenched in feedback and effects, and the general effect is likened to Best Coast being hit by a tidal wave, although in 'Gold and Stone' she manages to sound almost Cranberries-like. The drums and bass have that steady drive that fill all the gaps avoiding the lo-fi categorisation, yet the songs deliver a textbook example of punk-rock concision and pertinence. Yun admits to being slightly spooked by performing in the 14th century church, and is worried by us 'standing on dead people', but their set surely exorcises any doubts we may have about Eternal Summers. Long may their sun shine. 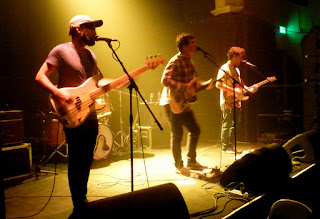 Surfer Blood hail from Florida, a state that is better known over here for its Everglades and Disney-style theme parks than for its Atlantic surfing beaches, but that doesn't stop a distinctly west coast sound, blending Beach Boy elements with Vampire Weekend poppiness and Pearl Jam grunginess. The result, though, seems a little predictable and clinical, despite the excursion into the audience by vocalist John Paul Pitts, and the extended guitar effects at the end of 'I Can't Explain'. 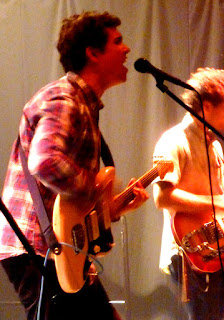 I appreciate that the band is emotionally in a difficult place at the moment with original guitarist Thomas Fekete's illness, and touring Europe must have been a tough decision to make, but somehow I got the feeling that Surfer Blood were under-performing tonight. They just needed a little more energy to make the whole thing work. Or perhaps they, too, were disappointed by not selling out Norwich on a Monday night, or were spooked by the thought of standing on dead people.

Eternal Summers' page on their label Kanine Records' website is at http://kaninerecords.com/eternal-summers/ together with plenty of videos to watch. The new album 'Gold and Stone' is available now.

Surfer Blood's website is at http://www.surferblood.com/home The new album '1000 Palms' is now available.