Anna Pancaldi at The Bicycle Shop 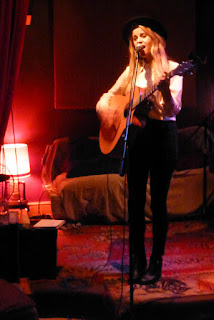 It is an excited Anna Pancaldi that takes to the tiny stage at Norwich's Bicycle Shop in St.Benedicts Street. Not only is she surprised by the number of people that have packed into the small downstairs bar on a Monday evening, but it is the first night of her first headlining tour.

We have been warmed up by local (via Cornwall) singer songwriter Samuel Leonard Keith Leonard, who has one of the strangest names ever and so performs under the moniker of True Adventures, which he freely admits is easier to find on Google once you get past all the outdoor activity sites. Sam, for that is how he introduced himself, performed a set of self-penned songs as well as a cover of  Chris Staples' 'Dark Side of The Moon' (no, not that one). Playing electric guitar, but singing in a distinctly folk style, the highlight of the set is his single 'North Atlantic Ocean', which was recorded with an orchestrated contribution from local band Wooden Arms. 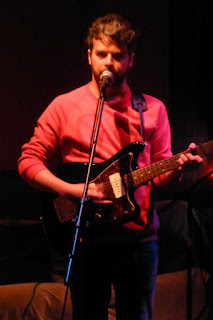 Once Pancaldi has gotten over the fact that we have turned out to see her commence her tour we learn the other reason for her excitement, one which she literally has to keep under her hat until Wednesday. She is to be one of the faces for the launch of the new campaign for Levi 700 jeans, and one of her tracks is to be used for the advertisements. Presumably this is why she is obliged to wear the jeans, boots and hat that she sports in the teaser ads on social media.

Other than her impending fame as a denim-sporting ambassador for the American fashion brand, I knew very little about this Essex born singer songwriter, other than her parents now live in the Orkneys, and that she spent three years of her teens in South Africa before returning with her family to Chappel (home to the famously huge brick viaduct). Now London based, she has attracted attention of Huw Stephens, Tom Robinson and Gaby Roslin at the BBC, has supported the likes of Rita Ora and Rudimental, and has released one EP 'Black Tears', and has another all set to leave the nest. Perhaps this is the last chance to see and hear her perform in such intimate surroundings.

After being complimented for being so quiet and attentive (the famous Bicycle Shop fish tank is apparently making more noise than we are), she takes us through a set that includes tracks from both EP's, as well as a beautiful cover of Bob Marley's 'Waiting in Vain'. Her vocal range is reminiscent of Joni Mitchell, although her style is not dissimilar from fellow Essex performer, and frequent visitor to Norwich, Leddra Chapman. Comparisons to the late, great Eva Cassidy would also not be a million miles off the mark. Standout moments for me were the acapella delivery of 'Nightingale' (off Black Tears), and the totally unplugged version of the lead track 'Out Ahead' with which she ended the set. No disrespect to the Bicycle Shop's sound system, but the room simply took on a new dimension when she played that song without any amplification. Spine tingling.

And so we await the release of the new EP, and also that mystery Levi track, which she hints is much more up-tempo than the rest of her material. Perhaps I should have hung around and bought a signed copy of 'Black Tears' after all. 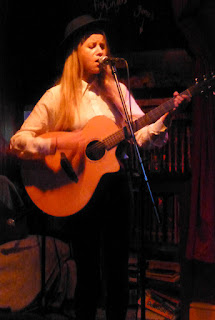 Anna Pancaldi's website gives full details of her music, and links to the relevant i-Tunes pages, at http://www.annapancaldi.com/#intro-section . No doubt we'll see the Levi advert all over the web from Wednesday.