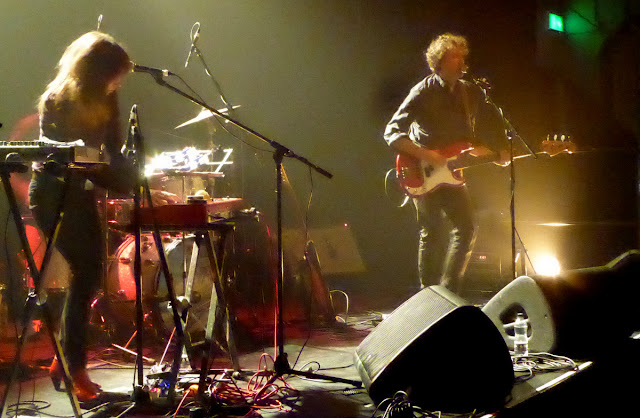 It is Tuesday night, and the second evening session of this year's Norwich Beer Festival is proving hard to resist. I have also ignored the chance to review a Sofar Sounds session elsewhere in the city featuring three 'mystery' artists. But no, I am back at Norwich Arts Centre to see an act that headlined a Jug Jaws Beat Club night at Bedfords' Crypt just five months ago.

Joe Gideon (previously of Bikini Atoll and Joe Gideon and The Shark) released his solo debut, Versa Vice, almost exactly a year ago. It was one of those albums that possibly needed several plays for the casual listener to really 'get', but I persisted and really grew to love its growling intensity. The chance to see him perform live was made even sweeter by his being joined on stage by Bad Seeds drummer Jim Sclavunos and a talented West Country multi-instrumentalist by the name of Gris-de-Lin.

Gideon is playing tonight in the first night of a double headline tour with Gemma Ray. Born in Essex, but now living in Berlin with partner, drummer and producer Andy Zammit, Ray is an artist that has remained criminally under my radar for far too long, especially with her previous albums all being acclaimed in reviews by the quality music magazines. The seventh, The Exodus Suite, recorded at the Candy Bomber Studios on the site of the former Templehof Airport in Berlin, was released earlier this year. It's title comes as a result of many of the airport buildings housing the recording studios now being used as temporary housing for up to 8000 Syrian refugees awaiting re-settlement elsewhere in Germany. The socio-political theme of the album's songs inevitably reflect the setting in which it was recorded. 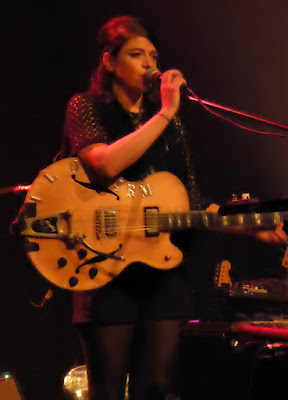 Gemma Ray gets to play first, not to a huge audience, but certainly not to an empty auditorium either. For someone who has just released an album with such present-day problems central to its content, Ray's appearance, dark hair rolled up into a semi-beehive, and her instrument of choice, what looks like a vintage Hagstrom guitar (she has favoured Harmony Rockets on previous albums), is perhaps initially viewed as something of a paradox.

Certainly the music press have been tricked into making the inevitable comparisons with the likes of retro-inspired artists like Amy Winehouse, and the originals like Patsy Cline and even Franciose Hardy, and her guitar work can at times sound very cinematic, the tremolo reminiscent of soundtracks to David Lynch and Tarantino movies. But there is a contemporary edge to her music that almost defies definition. The closest comparison I could come up with is Anna Calvi, with a touch of Where The Wild Roses Grow era Kylie, although I have to also admit to hearing sweeter and lighter elements, including Dido and Helen Shapiro. Zammit's drumming, and occasional keyboards, again reminds of Anna Calvi's live shows. Classy and charismatic. Mind you, I've never seen Calvi attempt to play blues slide using what looks like a kitchen knife, or send her vocals through a stuttering stop-start effect pedal. Ray is certainly capable of showmanship as well as exquisite playing and atmospheric vocals. Stand out tracks for me both came from The Exodus Suite - The Switch and the haunting There Must Be More Than This. 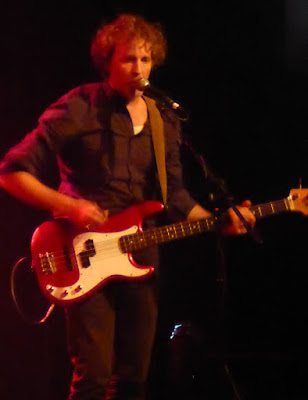 Perhaps it was the unexpected revelation of the first act, perhaps it was the sometimes inevitable result of over-anticipation from a previous gig, or perhaps it was just one of those nights, but I'm afraid Joe Gideon failed to ignite my fire in the same way that he did that night in the vaulted crypt of Bedfords. The set list, from what I can remember, was pretty much the same. Jim Sclavunos was bashing the drums with the same complex intensity as before, and Gris-de-Lin was playing keyboards, guitar and saxophone with the same involvement and versatility that impressed me last time around. 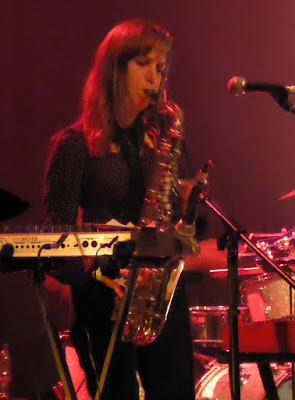 Perhaps Gideon responded better in the tight confines of Bedfords, especially as on that night he had to compete with a noisy element of drinkers at the bar who appeared to like the sound of their own voices more than that of those on stage. Sometimes that level of competition raises the bar of a performance accordingly, and adds to the intensity of the audience experience. The modest, but enthusiastic, crowd at the Arts Centre tonight may not have quite outnumbered those at Bedfords, but in a larger auditorium and with the band spread over a larger stage, some of the intimacy and the passion seemed to be lost. However the tracks from Versa Vice, including the powerful deliveries on Eugene Went Crazy and Heart Attack Girl, and the haunting cover of Porter Waggoner's Rubber Room, should have done enough to impress the first-timers.

Just a shame that we didn't get more of a two way vibe going on. Perhaps then we might have been treated to a reprise of that duet performance of Leather and Lace between Gideon and Ray at last year's Barbican tribute concert to Lee Hazelwood. Oh well. Perhaps next time.