A Tilting Sky with No Høly Men 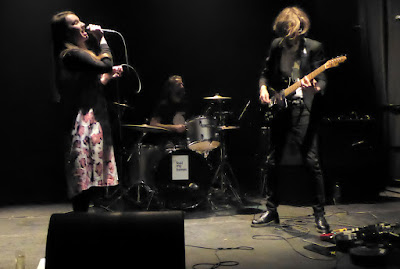 A real tug of loyalties on this November Saturday night. A choice of several excellent gigs in the city, and a visit from The Daughter from London meant that I needed to keep all my options open and flexible. But, after a bracing walk along the North Norfolk coast which included an outdoor lunch at the Beach Café at Overstrand and a pint of al fresco San Miguel on the pier at Cromer, we had formulated a plan. She would spend the evening with friends at a bar in the city, and I would check out The Tilting Sky night at Norwich Arts Centre. 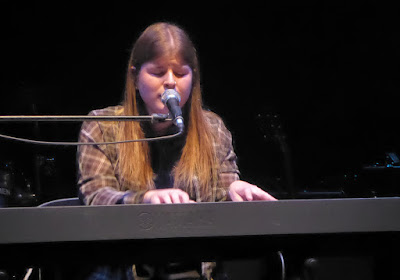 First up was Ginny Dix, who I first saw at the Waterfront Studio earlier this year supporting London-based electronic duo Avec Sans. Some of you may remember her as vocalist with Norwich band Freyr, who reached the finals of the Next Big Thing competition back in 2013. There is an honesty and resonant intensity in Ginny's voice that really works well sat behind her keyboard on stage at the Arts Centre, drawing the audience in from the bar within seconds of starting her set. She switches to guitar for one song, but it is the voice that really draws you in. There are contemporary reference points that include Oh Wonder and Alpines, although a cover of Chase and Status' Alive bowls a curveball on a wicket of downbeat dreampop. The trick of creating a 'ghost' male vocal accompaniment is particularly effective. An impressive performance, although she does have a tendency to sing much of the set with eyes apparently closed. 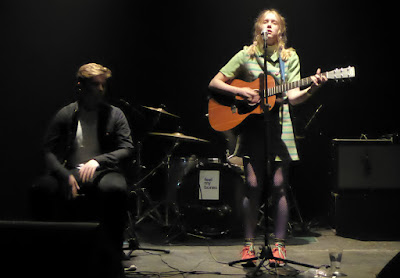 Sadie Nencini has progressed in leaps and bounds since I saw her perform her first ever live performance at a Sonic Youths showcase back in March of this year. Now she is on the main stage, and whilst still showing a few signs of nervous apprehension, and there are a couple of misplaced notes in her first song, once those spritely butterflies are exorcised what is revealed is a voice of confection that lies somewhere between Suzanne Vega and Camille Dalmais. The hip hop and folk compositions are delivered with cajon accompaniment from friend Jack, and the result is a seductive blend that imagines millennial lounge-act Nouvelle Vague switching from punk classics to rap covers. Caramel, the song title featured on the badges being handed out tonight, is not the Vega composition, but a rather lovely Nencini original which reminds a little of those Cabrakid / Maya Law collaborations. Very promising. 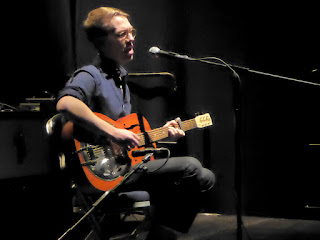 Singer songwriter Rory Hill has come a long way since those heady days of two-minute pop pleasures served up amidst the pleasures of The Radical Tearoom. The Kabeedies were a dynamic post-punk indie band, fronted by vocalist Katie Allard but featuring Rory on bass and songwriting duties. After Katie left, The Kabeedies morphed into Keep Up, but tonight we have Rory and his resonator guitar performing a wonderful solo set of Americana-inspired songs - a mostly down-tempo selection that covers all the traditional bases of broken hearts and breakups. There is a cover of Townes Van Zandt's classic Pancho and Lefty, and a final, more upbeat, composition that was inspired by actually being in a relationship. Rory has a wonderfully textured voice that manages to combine properties of both gravel and silk - a real revelation to anyone who has not heard him outside of The Kabeedies. A true talent. 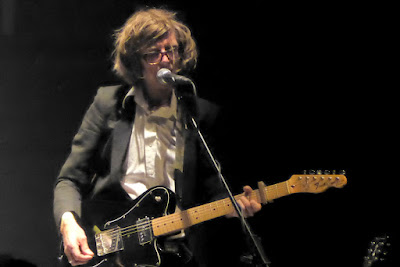 Tonight's headline act is Norwich trio No Høly Men - vocalist Alexandra Hill (yes, brother of Rory), drummer Nigel Aono Billson, and guitarist Andi Sapey. All three are lecturers at Norwich University of the Arts, but Andi is also a familiar figure to thousands of us for his amazing photographs taken from the pits of countless rock concerts and music festivals. Tonight the lenses point the other way as I point my modest Panasonic compact in his direction during this bill-topping performance.

Like the three previous acts, No Høly Men impress me tonight by the massive improvement since I last saw them. Their slot at the launch night for Norwich Sound and Vision was safe and moody, in a Radiohead kind of way, but tonight turned into a passage of rite into the realm of something much more tangible and exciting. True, the dramatic introduction sequence lost some of its impact when it subsequently transpired that Andi's pedal board had not been connected correctly, and Andi himself seemed to regret having had that last pre-set gin and tonic, but the three of them absolutely raised their game tonight. 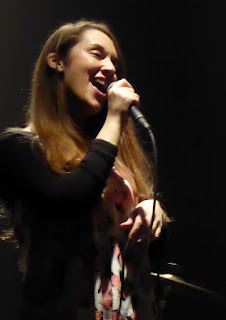 As well as a headlining show this is also an EP launch, although there are no physical copies to purchase (this is 2016, my dear). Instead we are given postcards similar to those shoved through the letterbox to say that you have missed an Amazon/Royal Mail/UK Mail delivery. But, instead of instructions for arranging collection, we are given a series of web links to obtain exclusive access to tracks Exhale, This Is All and Shake. A neat, generous and effective marketing device. 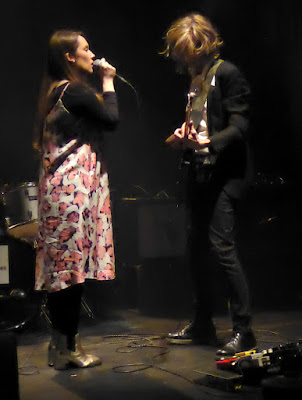 The performance itself really gave each of the three performers space to shine amidst the dark stage backdrop. Nigel is undoubtedly the stabilising backbone of the trio. His drumming provides exactly the right amount of anchor to keep the boat safely tethered whilst Andi copes with any remaining shafts of (unwarrented) self-doubt. Alex's vocals, once unleashed, have the capacity to transcend time and have moments when we are shipped back to the days of goth-punk and the sound of Siouxie and the Banshees. Andi, with trademark blond foppy locks, DM's and black rimmed glasses looks every bit the guitar hero kitted out in white shirt and black suit. But it is when the drums, the vocals, and the guitar all come together in perfect synchronicity that the magic is created. It may not have been technically perfect throughout, but there were many moments when I genuinely believed we were experiencing something rather special. The audience were on-side right from the start, and there was obviously a lot of love in the room for these three high-profile faces from the Norwich arts community, but the applause was genuine, warm, and well justified. Onwards and upwards.