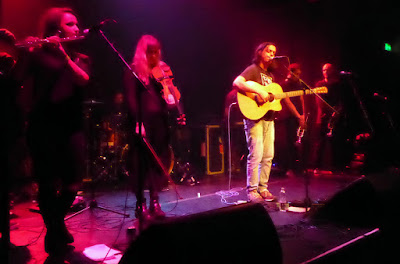 Birds do it. Bees do it. Even educated fleas do it. Everybody's doing it. Reprising their classic albums for live performance, that is.

Tonight I will be experiencing all the "Dah, da-da, da's" of The Fratellis' Chelsea Dagger for the first time in many a year as I watch them perform their debut album Costello Music in its entirety, ten years after release. Next month Kula Shaker dust down their robes to celebrate 25 years since K introduced Govinda and Tattva into common parlance. And on Friday night just gone Norwich Arts Centre played host to Get Cape Wear Cape Fly's Sam Duckworth treating us to a complete play-through of all the songs from 2006's The Chronicles of a Bohemian Teenager. Duckworth has also ditched his superhero associations, and now performs as Recreations with his band The Magnetic South. After having gotten my head around Mica Levi's band Micachu and The Shapes having morphed into Good Bad Happy Sad and confusing the hell out of me when they supported Savages at the UEA on Wednesday, this is all getting almost too complicated to keep up with. No wonder we old-timers need the familiarity of a classic album performed in track order, just to restore some order to our frazzled brains. 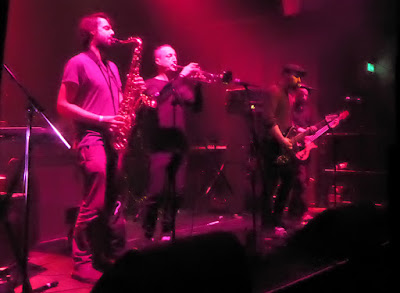 Friday night at the Arts Centre kicks off with local psych-punks Savage Island, a five-piece familiar to followers of the Norwich music scene for their rollocking shanties infused with Middle Eastern tinged melodies, trumpets, saxophones, various percussion enhancements, and some primal screaming. Yes, they sing as well, though it is the climactic instrumental numbers that normally get us moving early on into their sets. A great opener to any night, even if a lot of tonight's audience were a little tardy in arriving at the venue. 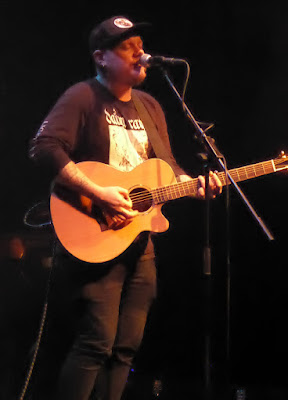 Dan Allen is next up. Enormously popular in Norwich and beyond via his band Ducking Punches, Dan is performing a solo set tonight, his first back in normal shoes since breaking a leg during the filming of a video with the Punches in September.

Followers of the band have now bulked out the auditorium to give Dan support, and to sing along with some of the familiar songs. At this point I have to raise my arm and admit to never having seen Ducking Punches live before. Not through a lack of trying, it's just that the band don't play Norwich that often, being kept busy touring throughout the UK and Europe. I am impressed. Not only is the voice big and filled with passion, but the guitar playing seems to echo the sentiments contained within the songs. I am genuinely moved by some of the lyrics, and the issues of suicide, friendship and mental health that are being dealt with here. Top man. 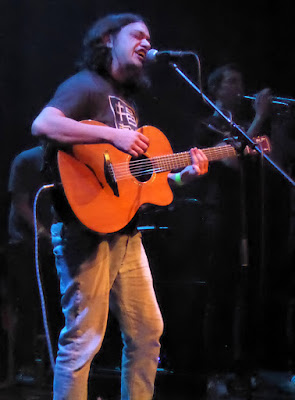 Sam Duckworth fronts up a band that contains the usual guitars, bass, keyboards and drums/percussion, but in addition features two trumpets on one side of the stage and a flautist and violinist on the other. These players collectively form The Magnetic South, the appendage to Duckworth's Recreations, and producing all the flair and accompaniment required to bring the Bohemian Teenager songs back to life, ten years after the album's initial release.

There is a lot of pent-up energy in Duckworth. Thirty-something life has not dulled the fire in his belly, and the band serves as a melodic and rhythmic anchor to his bounding vocals and strident guitar strumming. The issues dealt with in the original release - poverty, multi-cultural tolerance, and social care seem even more relevant today, yet the Magnetic South manage to beautifully harness and enhance the mood without diluting the message. Today's issues of Brexit, Trump and mass migration somehow seem wholly relevant to this ten year old album, and the track Get Cape Wear Cape Fly with its observations of over-consumerism could not be more appropriate to today's Black Friday orgy of spend. 'Open your eyes, as you don't need to buy'. 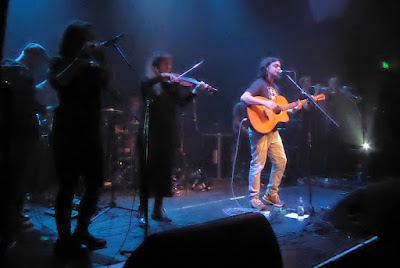 I am a sucker for a well-blown flute (god, that sounds like a line from American Pie - "there was this one time, at band camp..."), and the haunting trumpets on Once More With Feeling provide exactly the right amount of lump-in-the-throat special-ness. Yet Duckworth is still able to hold court alone with his guitar, and his message.

We appear to have plenty of singers in the audience, all prepared to contribute some beautiful harmonies from the floor. As the final track, the ironically titled Chronicles of a Bohemian Teenager (Part 1), builds to its climactic conclusion the refrains sung back from the floor build with it, and continue long after Duckworth and the band have left the stage, and the house lights have come up. Let's hope that the sentiments of this evening still resonate into the next morning and beyond.

www.facebook.com/recreations2k - Facebook page for Recreations and The Magnetic South 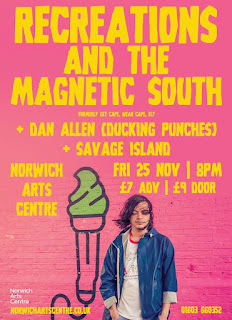