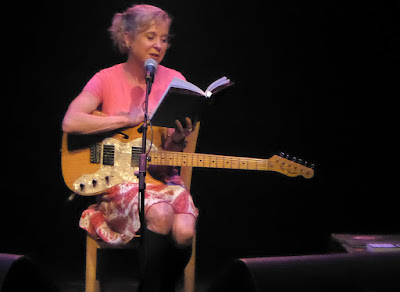 There is an oft quoted adage from those in 'the business' - You should never meet your hero. Well, I'm not really in 'the business'. I work on the box office at my local arts centre as part of their volunteer team, and I submit unpaid reviews to a popular local listings magazine and website. Essentially though, I remain a music fan who could not play a musical instrument to save a rowing boat, let alone the Titanic. My chances of actually meeting a 'hero' still remain as distant as discovering that the moon really is made of cheese.

The next best thing, then, is getting close. Now, by getting close I do not mean that creepy, sinister, hanging around, stalking kind of thing. I just mean that I prefer that potential chance of seeing a hero in a 20/20 vision setting, as opposed to on a giant video screen at an arena gig or festival. Smaller venues sometimes do throw up that opportunity. Tonight was one of those opportunities.

Kristin Hersh first came onto my radar in the mid-eighties when the eponymous 'Throwing Muses' album was released, a couple of years before a certain Kurt Kobain and his band really re-ignited a UK post-punk audience's interest in American reactionary rock music. Together with Tanya Donnelly the Muses gave the musical transatlantic equilibrium a much-needed West-East restorative kick in the balls. 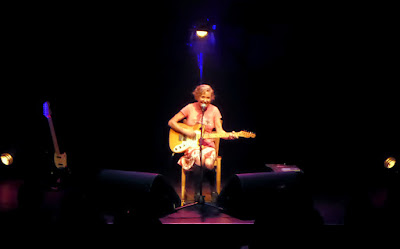 So, what we actually get is a beautifully structured mix of songs performed by Kristin, a series of lyrical readings, and the occasional verbal interlude. It is a solitary display, yet remaining at times somehow slightly detached from us, the audience. She admits that she had been warned about playing 'new' songs, that they were a sure-fire way to alienate an audience, but that is not the case. We show our appreciation in the usual way, and enjoy the between-song readings from the book (whilst appearing unclear whether or not to applaud these as well). Her voice is laid-back Southern perfection, a tortured but strangely detached and desolate reconstruction of Cobain and, dare I say it, Cerys Matthews (albeit without the Welsh lilt). She picks at and strums her gorgeous chestnut and cream Fender with self-assured familiarity, and uses the bottom two strings in a rich and sonorous manner, creating at times the illusion of bass guitar riffing.

What we do not get is any extended interaction, confession or anecdotes from her 35 years in the music business. There are a couple of introductions - Detox is preceded by a story about feeding copious amounts of gazpecho to the local hookers, and Sno Cat prompts a story about storming out of the house after a verbal fight, but most of the set is simply an ordered procession of lyrical readings alternating with personal songs. And who could be disappointed with that?

We leave at the end of the evening with the satisfaction of having been in the presence of a musical hero. Yes, she is also a mother to four kids, and may have had a complicated back story, but she has chosen not to share that with us. This was not a soul-bearing performance, but a performance based on soul. And I absolutely loved it.

Kristin Hersh's latest release is a hardback book of essays and lyrics, with two CD's included. 'Wyatt At The Coyote Palace' is available from Amazon at www.amazon.co.uk/Wyatt-Coyote-Palace-Kristin-Hersh/dp/1468313819 , and from all good retailers.