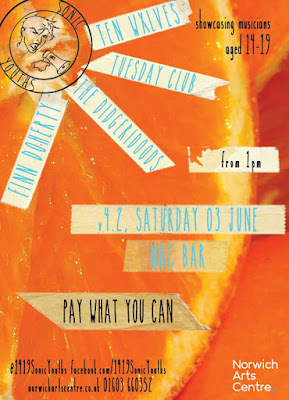 This was certainly one of the most intriguing and varied of  the Saturday afternoon Sonic Youths showcases that I have had the pleasure of attending at Norwich Arts Centre, and it was good to see the Adnams Mission Hall Bar buzzing on this, the first weekend of Summer.

And, as I settled myself at the bar with a pint of Wolf Brewery's Golden Jackal (3.7% ABV for all you real ale nuts - a honey-ish pale brew with a deceptively moreish flavour), Annie Catwoman's megaphone trill called the house to order and welcomed our first act to the stage, with a warning about anticipated volume levels, and the offer of earplugs to those with sensitive ears.

For this was Ten Wxlves, the alter-ego of fourteen year old electronic bedroom composer Harley Riecansky, whose set features a blistering barrage of beats, samples and dub-step bass that is totally engrossing and hugely enjoyable. Referencing everything from Daft Punk to Pendulum to Fatboy Slim, Harley makes the whole process seem so slick and easy. And that is not just idle praise from an old-timer who still has serious problems setting his i-Pod to 'shuffle'. This was the sound of a young man who had had every foot tapping, as well as a few dance steps thrown by the youngsters present. Hugely impressed. 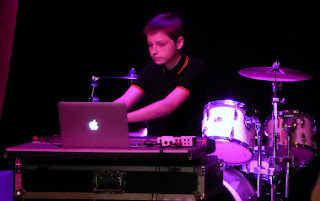 Next up was possibly the most bizarre act to grace the Sonic Youths Showcase, ever. I would suspect that sound engineer Conor has never been asked to mike up a didgeridoo before, but that is exactly what was required for the next act. Featuring three guys whose busking is familiar to many around the streets of Norwich, and whose 'Just Doo It' t-shirts leave no doubt about the good-time vibe and dominant instrument employed, The Didgeridoods are exactly what it says on the tin - Ciarán Skipper swapping his trombone for something a little more antipodean, and augmented by Oskar Beckley on African drum and Izaac Adam on cajon, cowbell, and anything else he can hit his sticks on, which apppears to include chairs, tables and bar surfaces. The 'doods' take us through a free-form set happily seated on the floor, which is possibly another first for Sonic Youths, before inviting former Lobster sax-man Dominic Trevor to accompany them on the final flourish to their set, the imaginatively titled Didgeridong. Free-form and respectful Aboriginal-inspired jazz on a Saturday afternoon. Just love it. If you see these 'doods' busking around the city please drop a polymer-based fiver into their hat, although I am assured that nickel, brass and copper based products are equally acceptable. 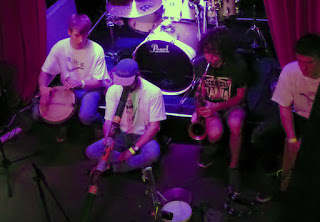 Third act up is local singer songwriter Finn Doherty, and someone who I have seen perform several times before. Very confident, and very accomplished. Not only in his singing, playing and songwriting skills, but by his ability to embrace technology, and loop his own voice and rhythms into performances. I love his own material, and would certainly recommend his Heritage and Parenting EP. Particularly like the Jaztec remix of Bruv, and the Stevie Wonder cover of  So What The Fuss. Look out for Finn appearing alongside Leaone and Hydra Lerna at The Owl Sanctuary on June 15th. 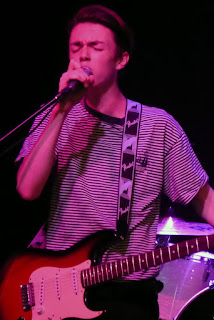 Finally, and certainly not least, is Wymondham-based five-piece Tuesday Club. Never seen them before, but see lots of summery potential in their sound, which seems to include Wham!, Vampire Weekend and Friendly Fires in their influences. You'll get a chance to see them again at Bury St Edmunds' Homegrown Festival (9th - 11th June). 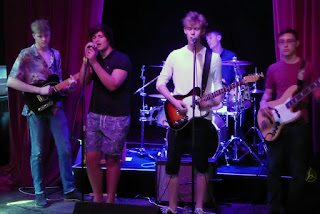 So, as we filter out into the summer sunshine, the sound crew are already prepping for the evening's show - a triple header led by ex-Easyworld frontman David Ford, together with The Magic Numbers' Michelle Stodart and Connecticut-based guitarist JP Ruggieri. A gig which I will share with you later.

And don't forget that Sonic Youths will be hosting acts on Norwich Arts Centre's Stage outside The Forum on July 8th, part of this year's Young Norfolk Arts Festival. Lineup is rumoured to include Cabrakid, Lobster, Midnight Zoo, and Maya Law & Allergy Kid.