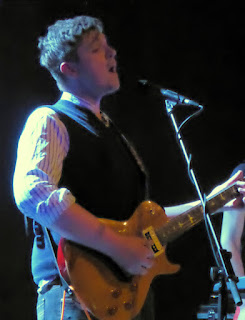 Go Norwich! For a small provincial city we sometimes punch above our weight when it comes to live music. Thanks to some great independent venues (the dreaded O2 venue stranglehold has not yet reached out to Norfolk. In fact, it's all we can do to get a mobile phone signal at all in much of the county), I can proudly say that in the last year I have been able to see 6 out of 12 of last year's Mercury Music Prize nominees play in Norwich.

To be fair, Florence and the Machine and Slaves were at Radio 1's Big Weekend, which doesn't come to Norwich every year, but Slaves did play at our beloved Owl Sanctuary not so long before. Wolf Alice re-visited the UEA, Gaz Coombes graced Open, and the lovely Eska and SOAK gigged at Norwich Arts Centre. And now, to make it seven, Glaswegian bedroom maestro C Duncan brings a live band to NAC in a show originally scheduled for February of this year.

It is a Sunday night, and we are not always good at getting to venues in time to see support acts, but Essex singer-songwriter Kevin Pearce has played here before (he supported Scott  Matthews a couple of years ago), so knows what to expect. He peers into the dark void and thanks us for coming to "tonight's intimate performance". He introduces each number, and laces each one with a dry comment that might have come straight off the page of an Alas Smith and Jones routine. Come to think of it, if you morphed younger versions of Mel Smith and Gryff Rhys Jones into one, the result would look not unlike Kevin Pearce. I actually like his voice (which can alternately sound like Cat Stevens, James Skelly (The Coral), and Wild Beasts' Ben Little), and his material, especially the up-tempo Lucifer the Landlord, and the new single Maria Come Home, really justifies further listens. A cover of Amy Winehouse's Back to Black, is jaw-droppingly beautiful. I check the shrapnel in my pocket, though, and decide that another pint takes precedence over buying an album off the tattooed lady on the merch table. 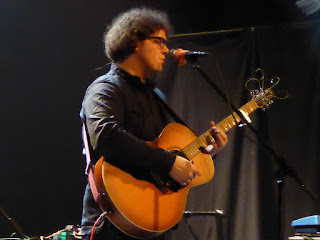 Even though I have heard the album Architect a gazillion times since its launch last summer, I still wasn't quite sure what to expect from a live show. Bedroom opuses from multi-instrumentalists and computer whizzes can occasionally transfer on stage into exercises in controlling tape loops and samples. Either that or, in spite of assembling a talented band, the live sound disappoints when compared with the familiarity of the recorded product. It's almost a no-win situation.

Also, I am slightly caught off guard when the band come on stage, and I initially mistake the shorter and slimmer figure of keyboard player Finn McCardel (who does not look unlike earlier press photos of 'Mr C') as being the main man. In fact, it is the sleeveless jumper-clad guitarist in the middle who welcomes us and launches into Say, the familiar opening track from the album. Not that I am the only one who is confused tonight. Mr C (no, fuck it, let's call him Christopher), Christopher is convinced that he has played Norwich before, supporting Lucy Rose last year. It takes a brave, and confident, Finn to put him right.

I am glad to say that the auditorium has, by now, filled out, and we are treated to an audacious live run through of nine out of the twelve tracks from Architect, each one transcribed beautifully into a score for keyboards, guitar, bass and drums. The vocal harmonies are gorgeous, re-awakening all those review comparisons with Fleet Foxes, and the little string of lights along the front of the stage does almost create a rustic woodland ambiance (if you ignore the giant album cover projected to the rear). Yes, the purists will spot differences between the live show and the recorded versions, but it would be a harsh critic who tried to claim that they were less complete for having a couple of layers peeled away or re-imagined. There is one slight hiccough when a laptop does not synch properly, but it was far less painful than the two jokes proffered by way of a diversion. Otherwise, the entire set is seamless, even if the arrangement of I'll Be Gone By Winter sounded awfully Christmassy for mid-April. 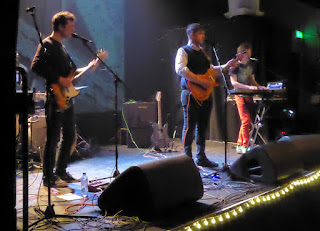 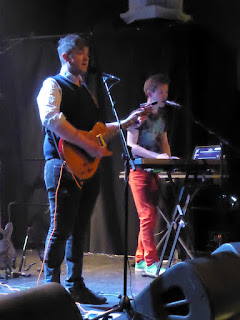 A cover of the Cocteau Twins' Pearly Dewdrops-Drops is sandwiched in by way of a personal tribute, and two new tracks, Do I Hear? and I Lost are also found room for. Old B-side Castle Walls is offered by way of a closing encore. Something by way of a landmark for C Duncan and Co to look out for as a reminder on their next visit to Norwich? 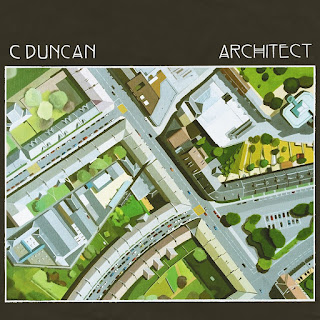 (This review also appears on Outline Magazine's website at: http://www.outlineonline.co.uk/music/live-reviews/c-duncan-norwich-arts-centre ) 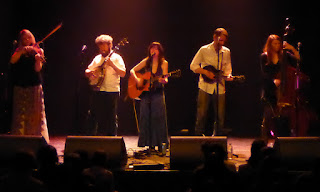 Abraham Lincoln's nickname was 'The Railsplitter', a moniker coined during his campaign to become 16th President of the United States of America in 1860. The aim was to capitalise on Lincoln's humble beginnings, which he spent living and working on his parents' farm in Kentucky. Young Abraham would also be hired out to help neighbouring farmers with physical tasks like log-splitting and fence-building. Railsplitting is the process of splitting large logs down into smaller 'rails' suitable for use as fencing posts.

Eastern Kentucky lies within the Appalachian mountain range, forming part of the Appalachian cultural region, generally considered the home of bluegrass music. The Railsplitters are a bluegrass band based in Boulder, Colorado (not part of Appalachia), although only fiddler Christine King is Colorado born and bred. Ironically, she is the newest member. The rest of the band had descended on the Rocky Mountain state from as far afield as Mississippi in the South and New York in the East, before forming as a four-piece back in 2012. Two albums later, and The Railsplitters are on an April tour of the UK, culminating at the Shetland Folk Festival at the end of the month. Tuesday brings them to Norwich Arts Centre for the first time, and they are to perform a double set to a buzzing seated audience. 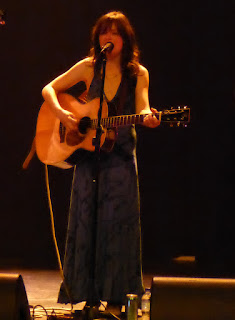 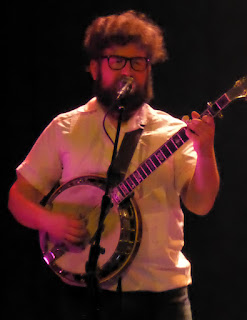 True bluegrass music, whilst originating in the Appalachian region, probably grew out of a mixture of Irish, Scottish, English and Welsh folk music brought across by migrant settlers.It later absorbed native American and, eventually, even jazz elements. Traditional bluegrass acts will keep to the original lineup of acoustic instruments - fiddle, five-string banjo, guitar, mandolin and upright bass (The Railsplitters' lineup) to which two, three or four part vocal harmonies are added. During performances individual instruments will often perform improvised solo 'breakdowns' whilst the remainder of the band provides accompaniment.

So those are the rules. The first thing we learn about The Railsplitters, though, is that they are not afraid to push boundaries, or even break the rules. Sometimes, as we are told during the introduction to Planted On The Ground, they manage to upset the purists, attracting the wrath of what lead vocalist Lauren Stovell refers to as the 'bluegrass police'. However, we are safe within the sanctuary of the ancient church setting of Norwich Arts Centre tonight, so they can break whatever rules they like. It will be fine by us. 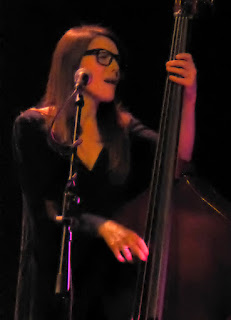 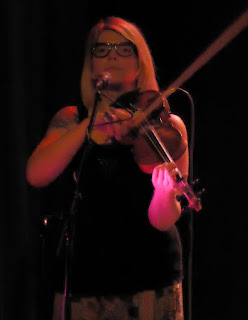 In fact, they start with an old Ray Price song, Sweet Little Miss Blue Eyes, which owes almost as much to honky-tonk as it does bluegrass. They also throw in a few more covers, including Bill Henson's Lonesome Feeling and a guilty pleasure in the form of Buddy Holly's Oh Boy! (during which they don novelty specs purchased earlier in the day from the fancy dress shop in St Benedicts Street).

But it is their own material that impresses tonight. All four original members share songwriting duties, either individually or collaboratively, and it is the input of Leslie Ziegler (bass), Pete Sharpe (mandolin), guitarist Lauren and the wonderfully-named banjo-player Dusty Rider (who is also responsible for many of the instrumental arrangements and vocal harmony layouts) that puts the contemporary into The Railsplitters' bluegrass, and even sees them spinning off into completely new territories.

The remainder of the setlist is culled from their two album releases - highlights including Boarding Pass and My World from the eponymous debut, and Tilt-a-Whirl and The Estuary from the new album The Faster It Goes. Lovely crisp vocals from Lauren (combining elements of Emmylou, Alson Krauss and even a bit of Dolly Parton), beautiful harmonies throughout, and wonderful musicianship. Even a non-bluegrass purist (I'm more of an indie-folk man, myself) is going to enjoy the sounds these guys make.

Introductions, and between-song banter, are shared out evenly, allowing us to learn that 'Tilt-a-Whirl' is what we would call the 'Waltzer' at a funfair (hence the image of a swing ride on the latest album); British 'candy bars' taste so much better than their American counterparts that merch sales proceeds are likely to be converted into confectionery before flying back to the States; and that there is no need for the word 'Estuary' in Colorado. 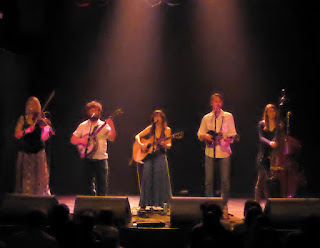 Judging by how the CD's are flying off the table tonight at Norwich Arts Centre, there will be plenty of room for a secret stash of chocolate bars to be smuggled back to Boulder at the end of the month. 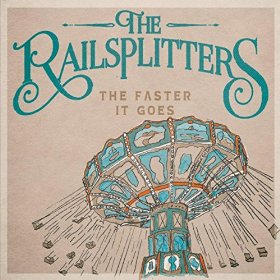 Who Rounds Up The Sheepdogs After a Night Out in Norwich? 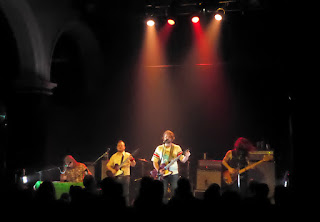 Proving that there is still a lot of love out there for good old guitar-based rock and roll as peddled in the 1970's by bands like The Eagles and The Allman Brothers and Crosby, Stills, Nash & Young, Canadian band The Sheepdogs have rounded up a roomful of music fans at Norwich Arts Centre tonight, all prepared to share in that love.

Formed in Saskatoon, Saskatchewan ten years ago, The Sheepdogs are currently touring to promote their fifth album, Future Nostalgia. After completing the UK dates they head off to Europe before returning for US dates starting on April 28th in New Jersey.

Tonight's gig at Norwich Arts Centre kicks off with some pretty hard rock in the shape of shape of Happy Coloured Marbles, fresh from their appearance at this year's Next Big Thing semi-finals. Essentially a three-piece from Norwich, HCM are not afraid to blow the bloody doors off when it comes to playing live. They brought a large crowd with them when they played at Open. Whether the softer rockers here tonight quite knew what had hit them remains to be seen, but I now love them. Edgier than The Bohicas, and tracks like Let Me In really set them up for bigger things in 2016. 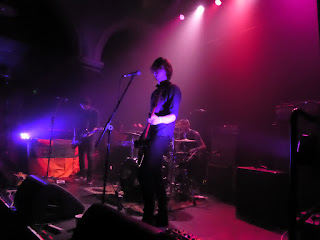 Anyway, back to The Sheepdogs. I struggle to think of any other band named after a canine breed (the best I could manage was Fabulous Poodles from the pre-punk days of 1975), but when the shaggy-haired quintet take the stage it is immediately obvious what inspired the name. Any thoughts of this simply being an homage to the glory days of Hotel California are rapidly dispelled as the band kick off with Where Can I Roam from the latest album. This is original, expertly-played boogie rock, that comes complete with keyboard and guitar solos, summoning up the ghosts of decades past but ploughing a path that uncovers new stones to be turned along the way. There's even a trombone thrown in for good measure. 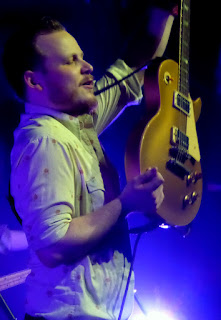 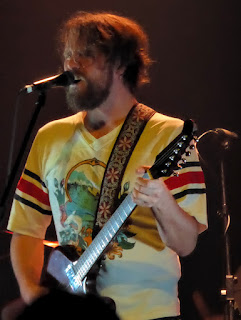 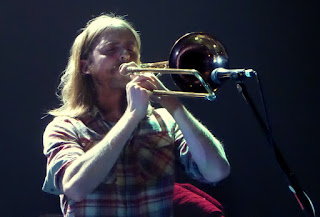 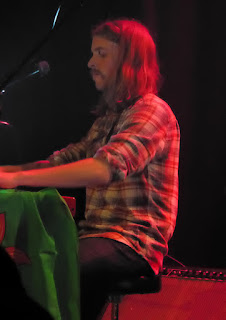 Any band that plays for nigh on eighty minutes without showing any hint of pastiche or insincerity surely demonstrates a genuine love for what they play. And that is what makes The Sheepdogs such a rare treat in these days of tribute bands dealing in sets comprising covers culled from the back catalogues of the 20th century boys. This is the real McCoy, not in any way a 'slow train running'. Future Nostalgia is an apt predictive title for what they do. 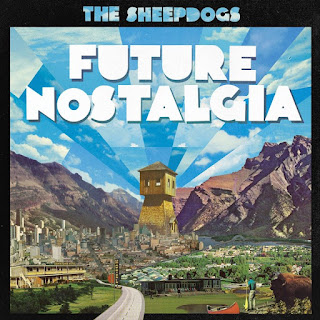