The Transports, by Peter Bellamy - A Norfolk Love Story? 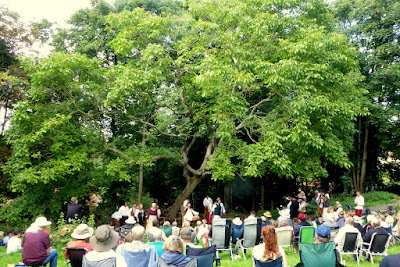 I have lived in Norwich now for over thirty years, yet still this city throws up new stories, and new places for me to visit. Take Kett's Heights, for example. I knew the story of Kett's Rebellion against land enclosures back in 1549, and knew that Robert Kett's rebels marched upon Norwich and besieged the city. The high ground which they used to make camp to the East of the city is now known as Kett's Heights, owned by Norwich City Council but supported by the Friends of Kett's Heights who aim to maintain the area as a welcoming space for the local community and visitors to Norwich.

I first made my way up to Kett's Heights only a few months ago. There is a gateway on the right hand side as you ascend Kett's Hill from the roundabout at the junction of Gurney Road, Barrack Street, and Bishop Bridge Road. Passing through this gate, and climbing the stepped path through the trees, brings you to an open area that was might once have been an orchard. This open area is perfect for outdoor theatre performances, and is indeed where I saw local company The Common Lot perform their history of migration show, 'Come Yew In', back in July. Proceed slightly further, and you arrive at the beacon installed in 1988 to mark the anniversary of the defeat of the Spanish Armada. At this point one is treated to panoramic views of the city of Norwich, including the castle, both cathedrals and the city hall and clock tower. It is now a vital destination on any tour for my visiting family or friends. 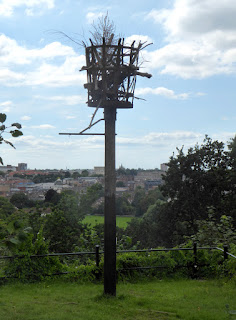 On Sunday August 13th this year I was back again, this time to watch a performance of Peter Bellamy's legendary ballad opera 'The Transports'. Written in 1973, and released at the end of the golden age of concept albums in 1977, 'The Transports' featured such folk luminaries of the time as Martin Carthy, Mike Waterson, Norma Waterson, June Tabor and Dave Swarbrick. It tells the true love story of Henry Cable and Susannah Holmes, who were separately tried for theft in 1783. 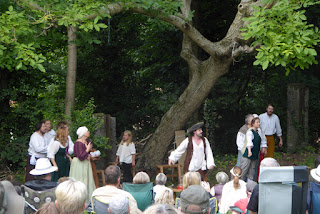 The death sentences are commuted to transportation to the Americas but, because of the American War of Independence, they remain in Norwich Prison for a period of three years, during which time Henry and Susannah start an illicit affair, and bear a child. When transportation commences to Australia instead Henry and Susannah are destined to be separated, and Susannah is told to give up the child. A public campaign taken to Lord Sydney, the then Home Secretary, results in permission for the threesome to travel together, and for Henry and Susannah to marry. They are even donated a bounty of £20, raised by public subscription, to establish their new life in Australia.

When Henry and Susannah arrive in Australia in 1788 they become the first convict transportees to be married in Sydney, and the first to successfully sue in court (Their 'bounty' of £20 was plundered by the captain of the ship, but Henry managed to win damages of £15 against him). Henry becomes a successful businessman in New South Wales, and he and Susannah had another ten children. Two hundred years on there are literally hundreds of descendants of Henry and Susannah who can trace their ancestry directly back to that early convict ship. The story remains today as much a part of the history of New South Wales as it does of Norwich. 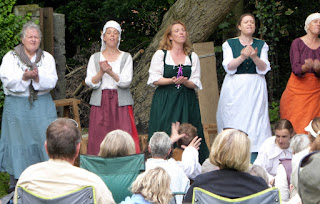 Whilst 'The Transports' has been performed many times since 1977, local amateur theatre group Crude Apache are one of the only companies to fully dramatize it. This year's tour has seen their production performed at various locations around Norwich over the last ten days, as well as at Wymondham, Whitlingham Park and the Geledeston Locks. This swansong performance on a Sunday afternoon at Ketts Heights was my chance to see Crude Apache's cast of ten singers and twelve musicians bring this story to life. 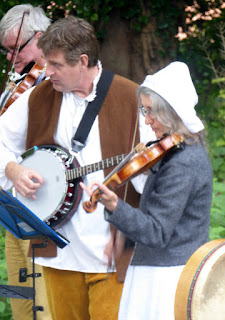 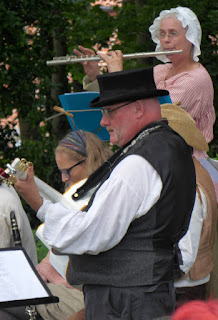 At just over an hour in length this is a challenging project for any amateur company to achieve, but musical director Tim Lane and director Panda Monium have managed to create a magical performance that holds our attention from start to finish. Admittedly some of the performers' voices are stronger than others, and the band occasionally falters in maintaining momentum, but for the largely seated audience on the grass at Ketts Heights, the enchantment is clear to see, helped by the dappled sunlight shining through the surrounding trees. No narrator is needed to guide us through the storyline - Bellamy's words and music and the commitment of the cast mean that we are totally engrossed in every detail of this poignant and reflective love story. Of particular mention are Gillian Dean (who plays Susannah Holmes) and Leo Oakley (who takes the part of Henry Cable). 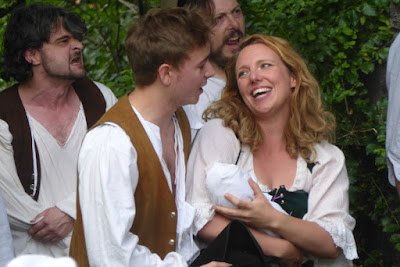 Thank you to Crude Apache for such a scintillating and enlightening afternoon, and to the Friends of Kett's Heights for their continued work in restoring the beauty of this iconic location. 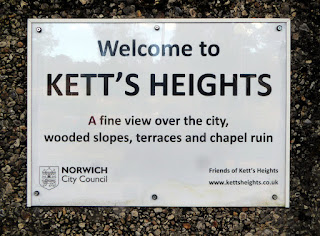 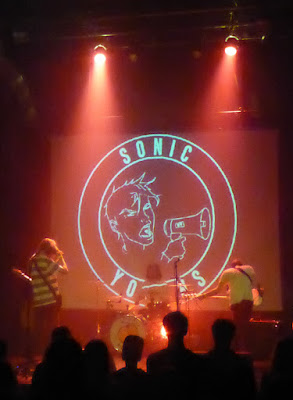 What a day for a third birthday party! It is August, but the rain started about lunchtime and just got heavier and heavier and heavier as the afternoon progressed. Even by early evening it was still coming down so hard that I had no option but to get the car out if I was going to attend the celebrations organised by Annie Catwoman at Norwich Arts Centre to celebrate three years of her Sonic Youths Showcases.

Open to all musicians of any genre, as long as they are between the ages of 14 and 19, Sonic Youths has provided a regular platform for young acts with original material who are either looking to make the move from practice and rehearsal to performing in front of a live audience, or just want to experience the atmosphere of playing in this prestigious venue.

Submission of demos in either audio or video format is invited by Annie, who then curates a lunchtime showcase in the Adnams Mission Hall Bar every three months or so. And once she has gotten her claws into you, you will probably be invited back to take part in further Sonic Youths events, either back at NAC or at various festival stages across the region. So far this this year Sonic Youths have had a stage in Norwich city centre as part of YNAF for the Lord Mayor's Celebrations, organised a couple of #ICYMI ('in case you missed it') reunion shows, and also curated a stage at Latitude. And as her sonic youths ultimately grow and fly away Annie continues to follow them all, posting updates and news via the Sonic Youths social media pages.

So tonight we have five acts performing, three on the main stage and two in the Adnams Mission Hall Bar. First up on the main stage is multi-instrumentalist and singer Hydra Lerna, known to many of us as Abigail Blake. Still playing her trademark harp, but now with a sound that capitalises on her growing production and studio skills, Abigail's new material seems to be advancing away from her earlier fusion of dubstep beats overlaid with twinkling loops, and is now entering a phase of self-exploration and new sounds. However, the harp has not yet been abandoned, and we are also treated to a recently composed instrumental piece that seems to take inspiration from her own personal hero, Agnes Obel. 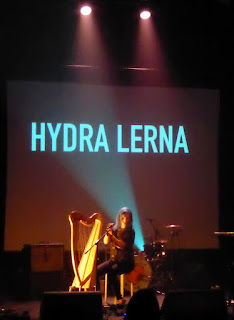 In the bar Flora Pechey is already on stage and waiting to go. She has a confidence that defies an appearance of vulnerability, a voice that is gentle yet is clearly capable of reaching the big notes, and a songwriting style that is peppered with moments of unique phrasing that seem to possess almost hip-hop etymology. 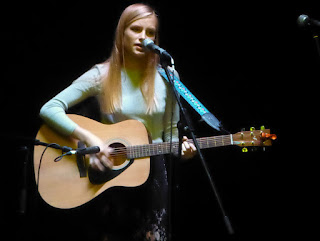 We'll Be Detectives perform tonight on the main stage as a three-piece, fronted by guitarist and lead singer Jonny Briggs. They are grungey, but without falling into the trap of trying to be or sound like Nirvana. Their own description of 'alternative rock bangers for everyone' seems to sum them up perfectly. Great songs executed with real stage presence. 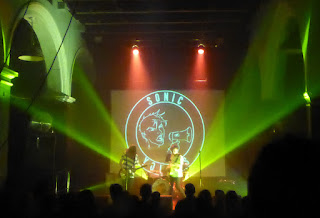 Back in the bar one of the most talented of the new wave of Norwich singer-songwriters is setting up. Finn Doherty is a record company A&R person's dream - chiselled good looks, confident and personable - and possessing a sackful of songs deftly performed on guitars backed up with an array of pedals, samples and loops. As he plays, a group of girls move forward to surround him and begin to dance. Blend the musical DNAs of Ed Sheeran and Declan McKenna and you could create a singer more valuable than a bumper bag of bitcoins. But do it quickly, before this guy makes it big. 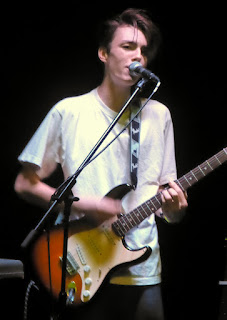 The final act nearly doesn't make it beyond the first two lines of their opening number when Peach Club vocalist Katie Revell suddenly and without warning hits the stage, leaving the rest of the band not knowing quite what to do. Apparently the band had been throwing some shapes in the dressing room earlier when Katie had twisted her knee. Hopefully it is nothing more serious. The way she went down it looked as though a ligament might have snapped. A chair and an ice-pack are quickly located and rushed onto the stage, and Katie bravely re-starts the set from a seated position. But it isn't long before once again the energy and sounds of Peach Club prove impossible not to get up and dance to, even if you are the injured lead singer. Getting better and better with each and every performance, Peach Club have a defiant riot-grrrl politic and attitude that the music business desperately needs. Just take it easy in those pre-show warm-ups. 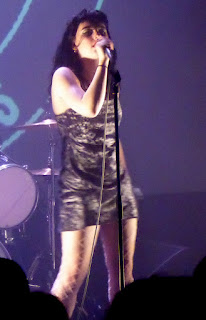 The next Sonic Youths showcase will take place at Norwich Arts Centre on Saturday 9th September. Check out http://norwichartscentre.co.uk/ for further details.