Courtney Barnett at The Waterfront, Norwich 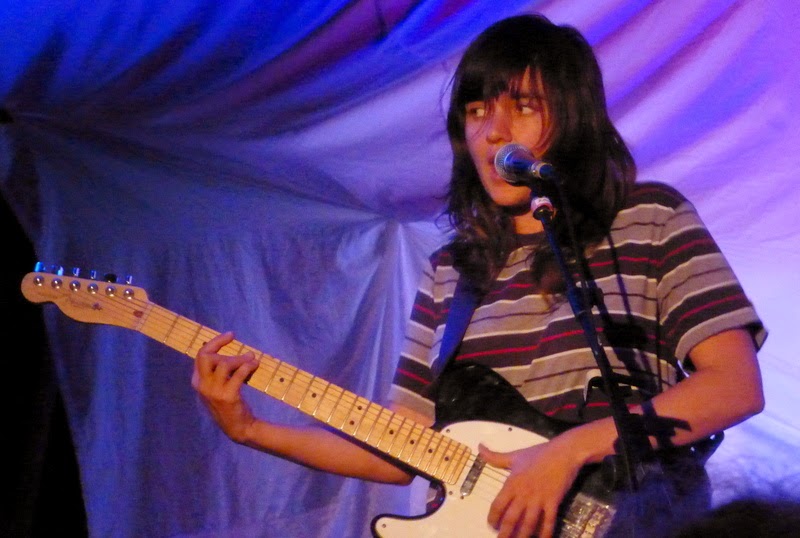 The Norwich Waterfront has never been my all-time favourite venue, yet I have been to some cracking gigs here over the years, everything from Anna Calvi to Scissor Sisters, The Klaxons to Cerys Matthews. Despite its wide stage and intimate feel, it is always a difficult decision where to stand for the best. The low ceiling means that the stage cannot be raised more than a couple of feet. Stand more than a few rows back and it becomes a 'head and shoulders only' view of the band - any further back and you are also busy avoiding the two dominating steel columns that threaten to position themselves just where you don't want them to be. And finally you run the risk of the tallest kid in the venue casually strolling in and taking up a position directly in front of you. Yes, a gig at The Waterfront can sometimes seem like watching a band through the slats of a picket fence.

Tonight's stage for Melbourne-based singer songwriter Courtney Barnett has been canopied by a huge white parachute-gazebo affair, reducing the playing headroom even further, and looking dangerously close to the heat of the spotlights, although I suppose they are mostly LED these days. 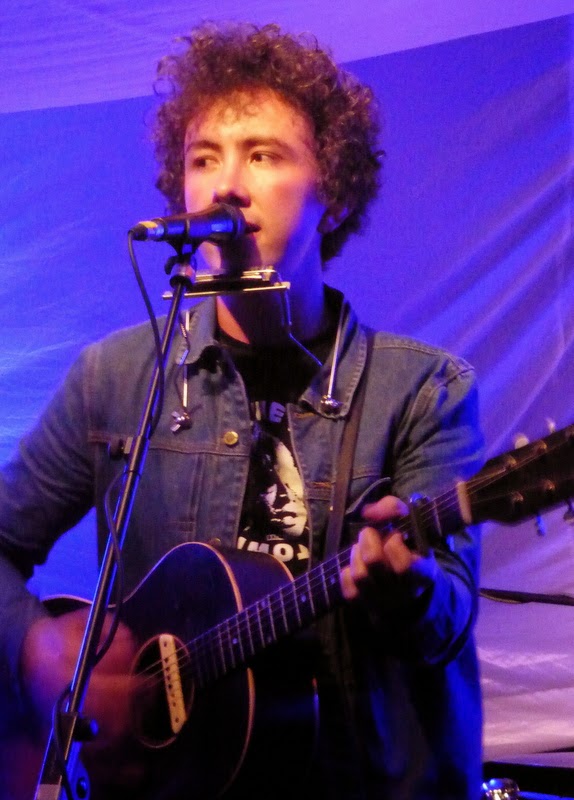 Fraser A Gorman, also from Melbourne, is first on stage, and even he comments on how much he looks like Bob Dylan, with his acoustic guitar, tousled hair and pointy features. When he slips on the neck-braced harmonica the illusion is complete, although his laconic Aussie banter is a million miles from the Frewheelin' Minnesotan. Dylan would never have likened a girlfriend to a late night kebab. His amiable nature and pleasant enough songs go down well enough with the Norwich audience - and I don't think his laddish comments have alienated too many punters. 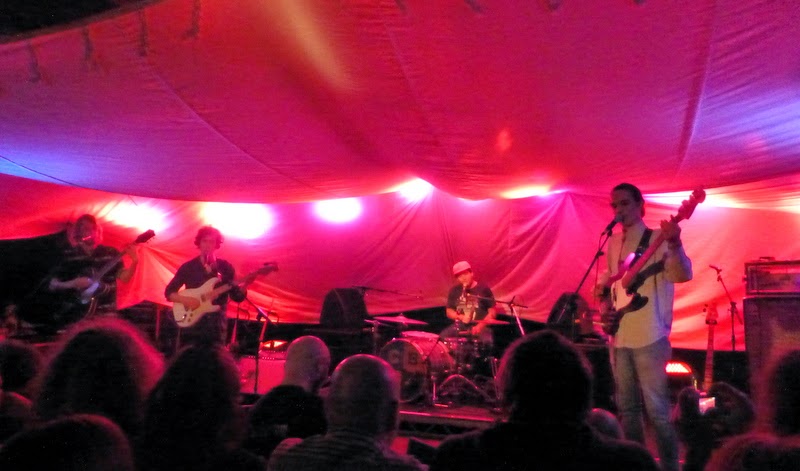 Next up are 'Spring King', a four piece from Manchester fronted by drummer and songwriter Tarek Musa. Probably as a direct result of Fraser's previous kebab comment, I have already morphed them from Spring Roll and Burger King into 'Spring Chicken', and the new name has stuck itself into my head. It doesn't help that I also find the stage dynamics scrambled when the drummer takes lead vocals, leaving three guitarists up front to posture and merely contribute choruses and refrains. The net effect is a garage-punk performance worthy of a Wayne's World sequel, or at best The Hives dressing down via a thrift shop.

No such disappointment when Courtney Barnett and The Courtney Barnetts (greatest name ever for a backing band) taking stage with no fashion pretensions or delusions of grandeur, looking every bit like they have just strolled off the Melbourne sidewalk. I need to remind myself  that the album 'Sometimes I Just Sit and Think, and Sometimes I Just Sit' has already made top twenty both sides of the Atlantic, as well as top four in her native Australia.

Backed only by regulars Dave Mundie on drums and the charismatic Bones Sloane on bass, it is Courtney's left-handed Telecaster that has to do all the guitar work without frequent fourth member Dan Luscombe being present to add extra depth. Even in the opener 'Elevator Operator', the Sheryl Crow infused anthem to drudgery and dead end jobs, it becomes clear that this live set is going to be a bass-driven grunge-fest rather than a display of country-garage, although the sound is great and the vocals are still clear enough not to obscure the wry cynicism of Barnett's lyrics. 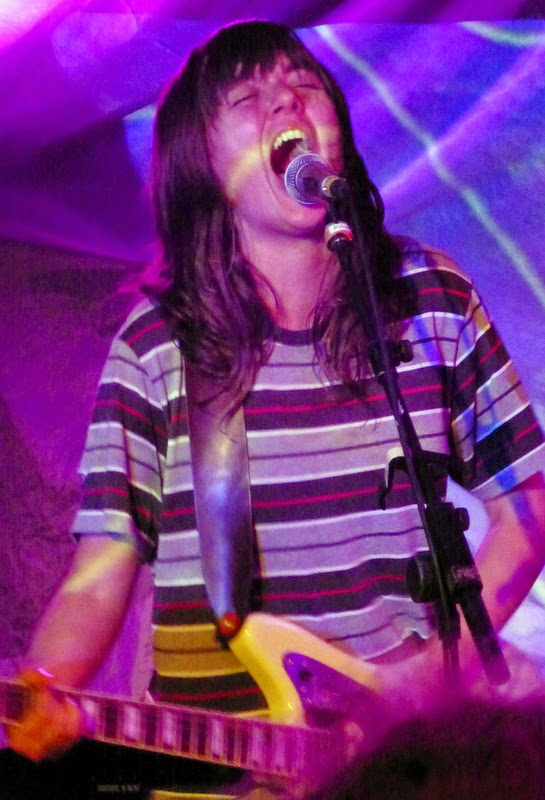 And this is what makes Courtney Barnett so much more interesting than other recent entrants into the new wave of 'slightly kooky' female songwriting, which saw the likes of Ida Maria and Sandi Thom come and go. Even our own KT Tunstall struggled to keep the momentum going. Courtney has the lyrical turn and observation of a Kate Tempest, or even a Neko Case, raising the everyday and mundane to an artform that makes you want to cut and paste every one of her lines. They are way too precious to lose through a poorly mixed desk. To the sound engineers' credit, this does not happen.

A couple of numbers in and Barnett has relaxed into her surroundings, Sloane's revelations of being denied the go-carts at Wild Trax, and eating 'great thai' on the floating restaurant helps to initiate a dialogue of bonhomie with the audience. We are asked if we 'had a g'day' and if we are going out later for Jager Bombs. It is only towards the end of the set where the old chestnut of Norwich audiences is raised, that of us all being a bit too quiet and well-behaved. It takes a plaintive call of 'Dance you fuckers!" before launching into 'Avant Gardner', and the floor finally responds by feeding back some physical appreciation. 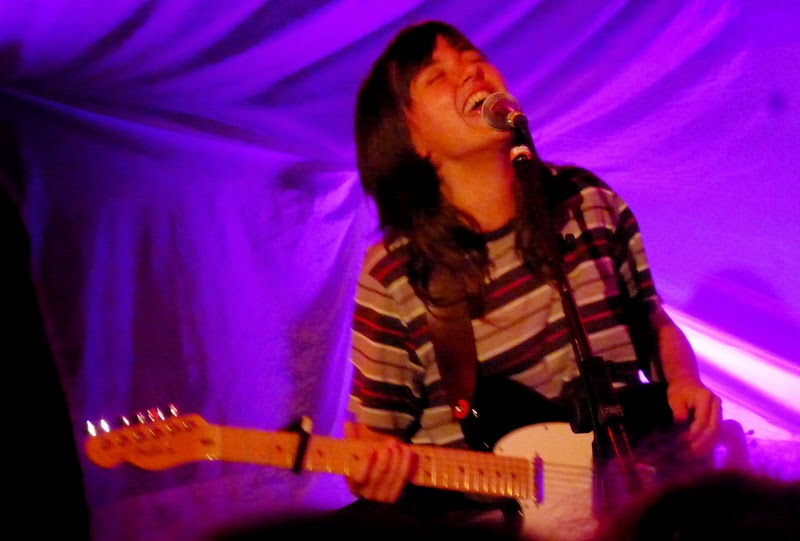 Then, after one of those excruciating delays where the band has left the stage at the end of the set, the applause has died down and we are still not sure whether we are getting an encore or not (even the venue seems confused) the band return for a finale that concludes in a cover of The Easybeats' 'I'll Make You Happy', at the end of which Courtney launches herself at the drumkit, ends up on the floor and her guitar strewn across a snare. It's only rock and roll, but I loves it.