Maddy Prior at Norwich Arts Centre - 3 For Joy 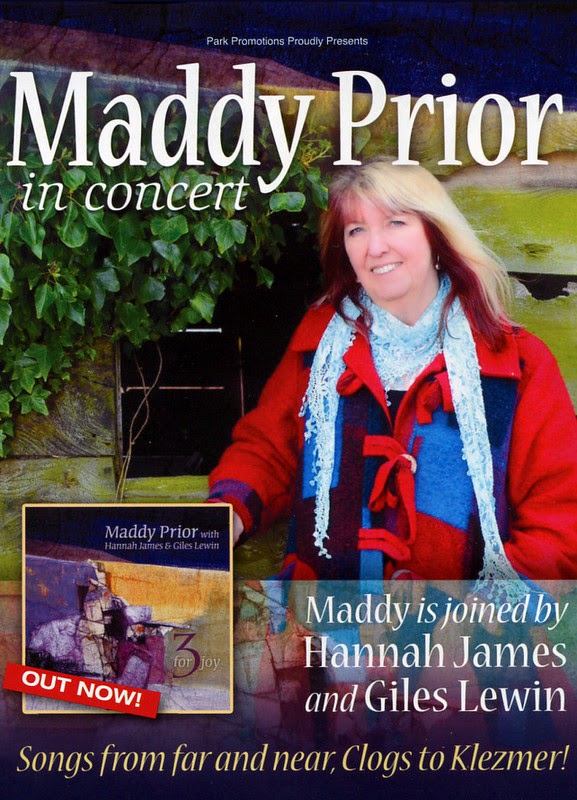 It is just over forty years since I last saw Maddy Prior perform live in Norwich. I was in the sixth form at high school in Lowestoft. It was a time when teenage credibility depended on one of three things - sporting prowess, success with girls, or an eclectic and encyclopaedic knowledge of popular music. Fortunately, I was only able to claim any success with the third.

There was a great deal of musical snobbery around at the time, largely fuelled by the polarisation of acts into either album-bands or singles-bands. Very few performers (Bowie was one) managed to transcend the two formats and top both sets of charts. My record collection was one of those that included anything and everything, from 'Mouldy Old Dough' by Lieutenant Pigeon to 'Houses of the Holy' by Led Zeppelin, and quite a few oddities in between. Not only did I avidly read New Musical Express, Melody Maker and Sounds, but I also dipped into the pop magazine market and would buy Record Mirror, and a marvelous rag called Disco 45 which printed lyrics of  top twenty songs of the time.

My other two interests at the time were darts and real ale, which could cunningly be pursued simultaneously, thanks to the relaxed and understanding policy of the licensed trade at the time. As long as you could hit a triple top and end on a double with reliable regularity you were signed up for the local league, and served ale without having to produce ID.

And so it was, with a group of  pipe-smoking, dart-playing, real ale supping friends that I travelled from Lowestoft to my first UEA folk gig - Steeleye Span, supported oddly enough by Richard Digance, who plays Norwich Arts Centre next week.

But tonight was a chance to fast forward the clock and re-acquaint myself with the singer from Steeleye Span and voice of English folk music, Maddy Prior. Performing with Hannah James and Giles Lewin, this was to be a totally acoustic evening of two sets with an interval in between.

Using material from the album that the trio released in 2012, "3 for Joy", as well as songs from Maddy's solo repertoire, it was a delight to hear that unmistakable voice still cutting the mustard here in Norwich. It also gave a chance to enjoy the two other musicians whose contributions surely added to the magic, not only through the beautiful vocal harmonies but through their instrumental talent. Giles Lewin was a founder member of Bellowhead, and plays violin, bagpipes and recorders. Hannah James has been familiar to folk enthusiasts through her appearances in the band Kerfuffle, and plays accordian as well as being one mean Lancashire clog dancer. She uses the clog as a percussion backing for at least one of the songs tonight, as well as treating us to a demonstration of her dancing skills.

Whilst it was lovely to see and hear Maddy Prior once again after such a long time, it was the tightness and cameraderie of the trio that made the evening so enjoyable.

And, as for Hannah James, she surely has a successful solo career ahead of her as she prepares to tour as 'Jigdoll', a project designed to showcase her three disciplines of singing, accordian playing and dancing. Whilst she had to admit that there is, as yet, no Norfolk date arranged for her upcoming tour in November, several of us here would be delighted to see her return.

Giles Lewin is currently a member of The Carnival Band, whose website is HERE