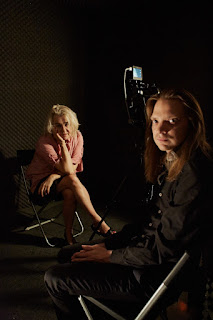 Supported with funding from Arts Council England 'And, I' is a single-channel video work and a collaboration between film-maker Reynir Hutber and performance artist Marcia Farquhar. Think of it more as an installation than a feature film, as it is essentially an eight-hour 'talking-head' monologue. Farquhar reminisces and muses over stories and recollections from her past, and of times spent living in her mother's Chelsea boarding house during the 1970's. Hutber's video camera captures every word and every nuance of this endurance monologue. The pauses, breaks and prompts are all happening in real time, and thereby reflects, compares and contrasts a typical day spent within our own working lives.

'And, I' was conceived to be shown in a public space, with viewers accessing the work casually alongside those with a specific agenda and interest in performance art. Whilst some may stay for the entire eight hours, most will drop in and stay for a shorter time, in the same way that our own interactions punctuate a working day with various colleagues and clients.

As the film tours the UK, the variety of venues will experience differing degrees and patterns of interaction from audiences. Busy weekday atria, reception spaces and galleries within metropolitan city centres will gain large exposure from a passing footfall. Quieter, more off-the-beaten-track locations will be stumbled upon more by random passers-by. The collective and accumulative effect will mimic our own lives, with some locations and projects providing more stimulation and opportunities for interactive experience than others. Norwich Arts Centre on a cold Sunday afternoon in January (a time when the venue is not even normally open) possibly falls within the second category, but does not detract from the addictive, almost voyeuristic, experience of eavesdropping into Farguhar's extended musings and reminiscences. Surely this again is the nature of our own working days and weeks - some are infinitely more interactive than those de-stimulating and repetitive days when we can spend eight hours alone, or in the company of just one or two colleagues. Totally engrossing, and for those attending Marcia Farquhar makes for a compulsive subject to study - those who have seen her in conversation before will attest that the woman can talk for England.  Are her stories based on truth or fiction? How many of her third person recollections are accurate, let alone factual? How much does it actually matter? You decide.

I drop in twice during the performance, firstly two hours into the screening, when I stay for just over half an hour. I return later in the evening with just under half an hour to go. It is as if I have not been away. Marcia looks and sounds exactly the same, and even appears to be talking on the same subject as she was six hours previously. Like workers approaching the end of an eight hour shift, the concentration and attention must not be seen to drop. Only once we are discharged from our duty can we let down the guard and relax - be that with an exercise class, a coffee with a friend, or a stiff gin and tonic. And what did I miss during the interlude between my two visits? How much else do I miss during a typical day, or indeed when I am at work? Who can say.

Learn more about Reynir Hutber via his blog at http://reynirhutber.blogspot.co.uk/
Learn more about Marcia Farquhar the artist from her own website http://www.marciafarquhar.com/