My Weekend of Lobster, Odd Boxes, and Sonic Youths 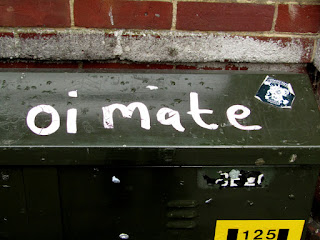 After a post-2015 week of stir-crazy Dry-January navel gazing my world starts to slip back into gear, and with a weekend packed with live music in Norwich to look forward to, my body was in danger of succumbing to something akin to Festival Dropsy, that feeling of tired legs, aching knees and cerebral exhaustion that comes from trying desperately not to miss anything, and adopting a belief that, somehow, surviving on about three hours sleep a night is completely do-able. 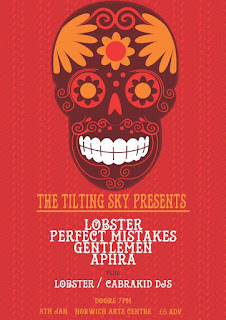 It was lovely to get back to Norwich Arts Centre on Friday although, as volunteer box office assistant, this was always going to be a case of keeping my wits about me rather than tripping off on some hedonistic orgy of beats and real ale. Heading the bill of Craig Hill's 'Tilting Sky' night was Lobster, the groundbreaking soul-funk-jazz ensemble headed up by Dominic Trevor on saxophone and Molly Holdom on vocals. Before challenging my definition of 'groundbreaking' just let me tell you that this nine-piece ensemble are all still in their teens. They are not only writing and playing the type of music that their parents would normally still be into (how bloody un-cool is that?), but they are getting all their friends and their friends-of-friends on board as well. As a result the Arts Centre is  packed out with 260 youngsters all up for a good time on some great live music. With Aphra, Gentlemen, and Perfect Mistakes providing backup on support, and the Lobster/Cabrakid DJ's spinning tunes in the bar, Craig's infamous £6 reduced admission deal to those in the know meant that this was always going to be a knockout event. Spend another £4 on Lobster's excellent debut CD, and you've probably had the best value for a tenner this side of Poundland's sale. 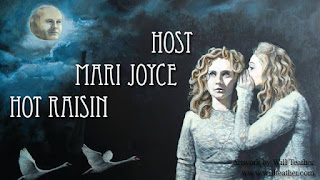 I didn't hang around at the end of my shift to catch Lobster's set (I know, I know, but I have seen them several times before, and they are competing in the first semi-final of Future Radio's Next Big Thing at Open on Saturday January 30th - tickets £4 in advance), so headed off instead to The Murderers to check out Host, a four-piece who describe their music as 'post-rock experimental'. It's another one of Odd Box Promotions' famous Friday night shindigs, and whilst I am too late to enjoy Hot Raisin or Mari Joyce, Host have only just started by the time I have negotiated my pint of Woodforde's Wherry and myself to a vantage point at the top of the steps and close enough to catch the action. 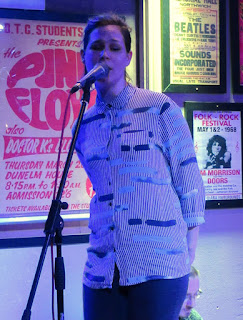 Post-rock means different things to different people, and often suggests instrumental or minimal vocals, but Host have a haunting vocalist in Lorna who can somehow carry off singing ethereally into a microphone whilst adopting the arms-behind-the-back stance of  a female Liam Gallagher. The only other person I have seen manage it is Beth Gibbons of Portishead, although tonally the voice has more the echoes of Sonja Kristina of 70's prog outfit Curved Air. Perhaps it is the Murderer's backdrop of posters from Pink Floyd, Doors and Led Zeppelin, but Host project an authentic retro feel that paradoxically goes hand in hand with their declared experimentalism. Steve's cross-legged synth playing, Dan's laid-back drumming (well, compared to his other band) and Jack's sweet guitar all combine to win me well over. £3 even buys me a two-track CD that is beautifully presented in it's own hand-crafted sleeve. I love them. 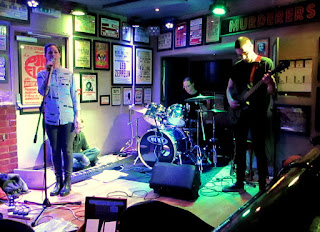 Saturday lunchtime back at the Arts Centre is my aim, and I manage it with flying colours, arriving just before the first act takes to the Café Bar stage for Sonic Youths, the Norwich showcase for musicians aged 14-19. Curated by the legendary Annie Catwoman, this is always worth making the effort to attend. Not only is it free admission, but you will become aware of the young musical talent that could continue to otherwise bubble away just underneath your radar. At the last one I experienced the amazing Midnight Zoo, who have since also made it through to the semi finals of this year's Next Big Thing. 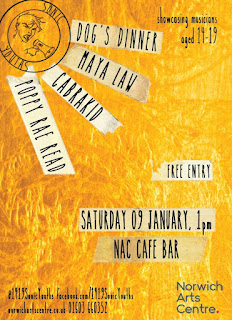 First up is Maya Law, a 16 year old who has already played The Waterfront and The Birdcage, and whose maturity and style would not leave her out of place at one of the Art Centre's full Acoustic Showcases. Once again (I sense a theme developing here), Maya will be performing in the second semi final of the Next Big Thing on Sunday January 31st. As well as her own songs, there is a folk-reggae infused arrangement of Amy Winehouse's 'You Know I'm No Good' that is amazingly accomplished. Her own songs employ changes of pace and key that really take you aback. There are obvious flourishes of both Ed Sheeran and Luke Pritchard in her songwriting, whilst her own voice reminds me at times of Tina Dico. New song 'Fiction' is a real delight.

Maya remains on stage to collaborate on the first two numbers with hip-hop duo Cabrakid, back in the Arts Centre after their DJ set the previous night. With 19-year old Jake on vocals sporting a luxuriant beard such that I could only dream of (I can only wonder at what they are putting in the school milk these days) and some lovely mellow grooves from Gabriel on the decks, this is the happy summery hip-hop that takes you back to the days of DJ Jazzy Jeff and The Fresh Prince. However the mood can change, as with 'In The Family' when they tackle frustration with the politics of Cameron and the Tories, and '2003-2004' when Arsenal football club is celebrated (in spite of Jake sporting a Hellas Verona hoodie over his Gunners shirt). High Priest Cabrakan needs to concentrate on staying in character a bit more whilst on stage in front of his mates, and perhaps not have to rap the lyrics off his mobile phone, but otherwise I really liked them. Lots of tracks on their Soundcloud page, many of which are available as free downloads (https://soundcloud.com/cabrakid) 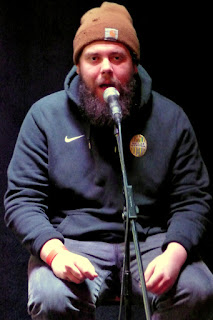 Poppy Rae Read was the second female singer-songwriter of the afternoon, and again put in a very credible set. It's a crowded market for guitar-toting alt-folk acts at the moment, and sometimes it takes a while to carve a niche which enables you to stand out in the forest. Certainly the voice, which at times had touches of the more traditional Americana seemed capable of being stretched into an edgier, more individual identity. Certainly one to watch. 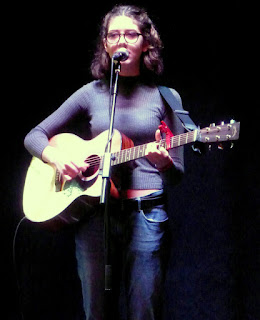 Finally, but by no means least, were the wind-him-up-and-let-him-go dynamo-fronted band that are served up as Dog's Dinner. I saw them support Kagoule about a month before Christmas, and even in that short time they have developed and gained self-confidence in their anything-goes rock and roll attitude, with frontman Josh writhing and contorting himself and his voice into all kinds of shapes whilst the band hit all the right notes. With foppish good looks reminiscent of The Vaccines' Justin Hayward-Young, but with the fuck-you attitude of the bad boys of punk Josh and these guys have all the right ingredients to win-a-lot of new fans. Did you notice what I did there? 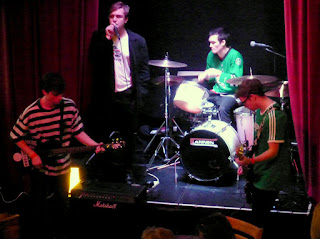 Thanks indeed to Annie for such a well contrasted afternoon of youth talent, and pleasing to see such a good audience turnout in the Café Bar. It left me just enough time to pop home and eat before returning later to the Arts Centre for the Plan-UK fundraiser featuring Jake Morrell, Kingdom Keys, and Addisons Uncle. But you'll have to read my review of that one elsewhere, at :-
http://www.outlineonline.co.uk/music/live-reviews/addisons-uncle-fundraising-night 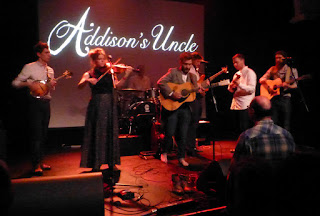 And now, to check my balls, and catch up with some football!