Honey and The Bear at The Bicycle Shop - That'll be a cover for two, then? 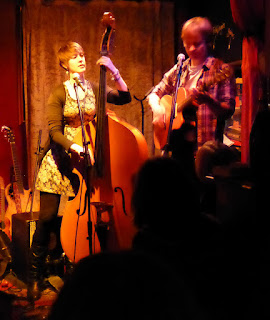 It may sound like the title of a pre-school reading book, but what you need to remember is that The Bicycle Shop in Norwich's St Benedicts Street is not a shop, and it does not sell bicycles, and that Honey and The Bear are not a fictional duo from children's literature, but a songwriting duo from Benhall, near Saxmundham. The Bicycle Shop is a bijou café bar on several floors that often uses the basement space for acoustic music nights. Now that we have cleared that one up, I can start to review the duo's return gig in Norwich on Sunday night.

Honey (Lucy Sampson) and The Bear (Jon Hart) were individually both singers and songwriters before they teamed up just over two years ago. Combining their talents added opportunities not only for composition collaborations, but also to introduce vocal harmonies into their performance and expand the instrumental range. They appeared at Folk East in both 2014 and 2015, and made their Bicycle Shop debut last year.

There is no support tonight, so Honey and The Bear will perform a back-to-back double set, a mixture of their own songs and selected covers. Starting off with Lucy on banjo and Jon on guitar, before introducing 'Bertha' the double bass, and later more guitars and even a ukelele, we soon work out that this is a couple that share more than just a love of of folk music. The chemistry between them is quite endearing, with each insisting that examples of the other's earlier songs are included in the set-list alongside the more recent collaborations. Individually, the voices have their own strengths, Lucy's having precision and range, contrasting with Jon's more laid-back 'surfer' sound. Put the two together and the harmonies work really well. Percussion comes via a drum pedal stuffed with an 'egg', used by Lucy against a beat box, sometimes whilst playing double bass at the same time. 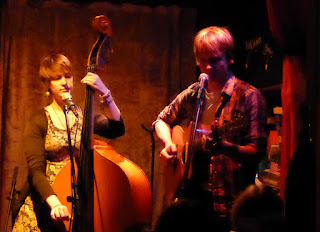 My only criticism of their extended set was the high number of covers included. All in all, I counted seven, and whilst some, like George Ezra's 'Budapest' (I hated that song when Ezra sang it, but these two really nail it), and their folky version of Bob Marley's 'Is This Love' working really well, the Sting standard 'Fields of Gold' is far too cheesy for aspiring acts to tackle nowadays. 'Fat Bottomed Girls' was cheekily introduced as a Dumbfoundus number and 'Cold,Cold Heart' was attributed to Norah Jones before someone in the front row reminded them that it was actually a Hank Williams song.

The effect of so many covers was to unfortunately render some of their own songs less memorable to a 'Honey and The Bear' virgin, which is to do themselves somewhat of a dis-service. I can remember 'Winter Tide' set against a bleak beach at Sizewell, the catchy 'Snuggle Song' (reminded me a bit of Barry Louis Polisar's 'All I Want Is You', and the sentiment is very similar), and the ballad 'Sailor's Daughter', but the rest, although all eminently enjoyable, tended to blur into obscurity against the familiarity of other artists' material for anyone hearing their set for the first time. 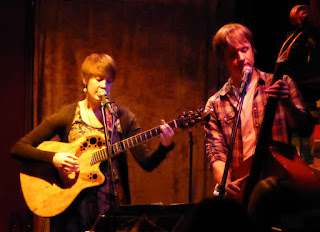 I genuinely wish this couple well. They clearly have a loyal fanbase, some of whom had followed them into Norfolk from the wastelands of Suffolk. It would really be nice to see some tracks online - they have a really professional looking website at http://www.honeyandthebear.co.uk/ , but with, as yet, only a handful of videos to remember them by. A five-track EP is promised but, in the meantime, keep your on-line eyes peeled for future live appearances.

Keep up to date with all upcoming music evenings at The Bicycle Shop at their website http://thebicycleshopcafe.com/ , or from local listing site http://www.outlineonline.co.uk/
Posted by auckers at 04:12

Email ThisBlogThis!Share to TwitterShare to FacebookShare to Pinterest
Labels: Honey and The Bear, Norwich, The Bicycle Shop