Pony Up for some Pins and a pint of Honeyblood. Cheers! 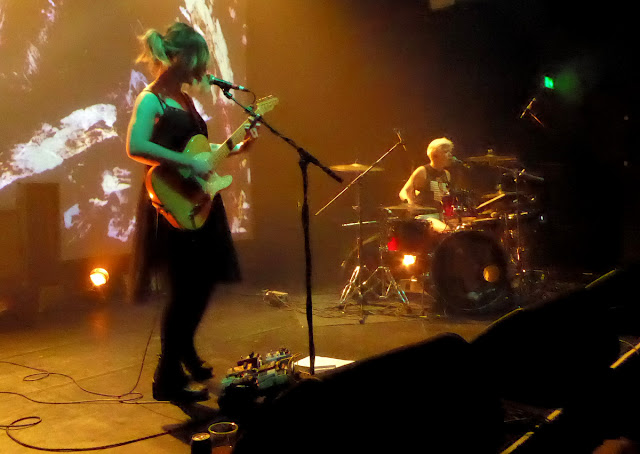 I owe a debt of gratitude to Pony Up. Since February 2014 when they picked up the reins formerly held by local music promoter Twee Off they have introduced me to some pretty damn fine music. Pony Up quickly established an enviable reputation for booking new and breaking national names, and matching them to some exciting local support. The idea was to lay on an evening of top quality acts, but with a ticket price that anyone could beg, steal or borrow. They commissioned Jo Stafford, of Print To The People, to produce artwork for the gigs, and even gave away limited edition prints to the first punters through the door at each event. Over the last two and a half years Pony Up has introduced me to the likes of Young Fathers, Kagoule, Declan McKenna, Micachu and The Shapes, Menace Beach, and God Damn, as well as giving me a chance to hear local favourites like Teen Brains, Collider, Peach Club, Claws and even Let's Eat Grandma. So, to Pony Up, I say, 'Thank you'.

For what is probably the last Pony Up of 2016, they change direction slightly, and bring back two bands that have played Norwich before. Both have each released second albums to critical acclaim, and, with all-female line-ups, have helped to challenge the status quo in a business that has a sorry history of being fiercely and protectively male-dominated. It was therefore a big welcome back to Norwich Arts Centre to PINS from Manchester, and Honeyblood from Glasgow. 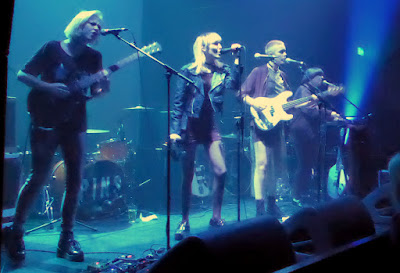 PINS were formed in Manchester in 2011 by a fashion photographer, Faith Holgate, who enrolled cello-playing Anna Donigan to play bass, fellow guitarist Lois McDonald, and then persuaded Sophie Galpin to take up the drums. Later a fifth member, Kyoko Swan, would learn keyboards to complete the current line-up. The sound of their first album Girls Like Us probably owed more to Scottish rockers Jesus and Mary Chain than it did to the Manchester sound , but was then followed up last year with Wild Nights, recorded in America and showing a transition to a more open and wide-hued palette. They have played within our city walls at two Norwich Sound and Vision events, firstly in 2013 and then again last year at The Mash Tun. However, as is often the case with NS+V, there was so much going on elsewhere that I missed their set on both occasions. Definitely time to make amends. 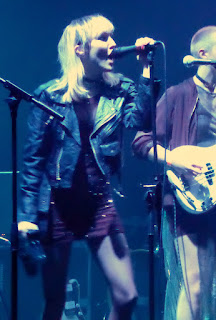 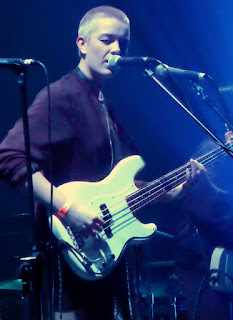 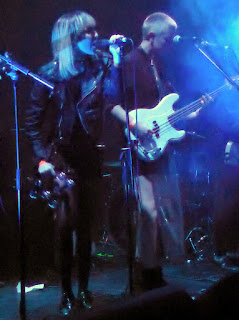 PINS open with Trouble, released as one side of a 10" single earlier this year especially for Record Store Day. It is a dark and menacing number, a million miles away from the other 'Trouble' from nineties 'girl power' bubblegum pop band Shampoo. The Arts Centre stage is bathed in dark blue light, and the smoke machine is doing its business as Holgate's snarling refrain of 'Don't call me sweetheart' sets out their stall perfectly. The remainder of the set draws from both Girls Like Us and Wild Nights, the latter showing melodic touches that you could easily re-work onto a Beach House album, or in the case of the stomping Young Girls even give a contemporary country makeover to. Overall, though, they stylistically remind me a lot of The Horrors - moody and atmospheric, delivered with a huge amount of panache and style, but with occasional moments of pleasure-seeking sharpness. The one nod to their Manchester adopted home comes with a cover of Joy Division's Dead Souls, slipped in to the set without introduction or fanfare. Really impressed by PINS. Please, please come back and perform a headline set here before too long. 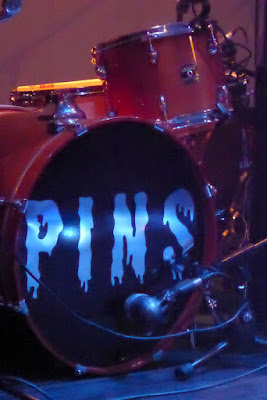 Glaswegian duo Stina Tweeddale (vocals, guitar) and Cat Myers (vocals, drums) have been together as Honeyblood since September 2014, although the band was originally founded in 2012 with Shona McVicar, who at the time was a dental student, on drums. The eponymous debut album was recorded before stick duties were handed over to Myers, and she had only just enough time to learn the songs before I first saw the band play at Epic Stuidios in Norwich in November of that year when they supported Superfood. (Incidentally, opening that night were local favourites Claws, my first ever time seeing them play live) 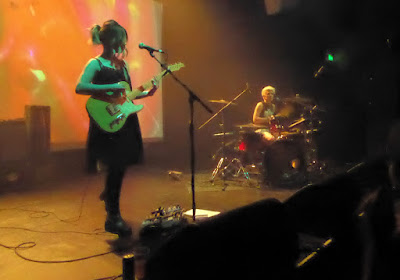 From a dark, packed stage with the five-strong members of PINS to a backlit projection screen and just a guitarist and drums combo placed on opposite sides seemed to leave an awful lot of space unfilled, and Tweeddale remains fairly static for the first couple of tracks, including Ready For The Magic from this year's 'Babes Never Die'. Even though the auditorium seemed almost full, and everyone seemed well up for a bit of a dance and a jump around (the Arts Centre had even obligingly put the safety barriers up ready for a bit of surge and bounce activity), the duo themselves seemed intent on a slow build. They featured mostly slow to mid-tempo numbers until about half way through when Sister Wolf  seemed to be the signal to raise the flag for a bit of audience calorie burning. From then on it was energy levels on high right up to the end, when Super Rat and Killer Bangs provided the seamless 'encore' - no walking off and coming back, just a warning that these really would be the band's final songs of the night. 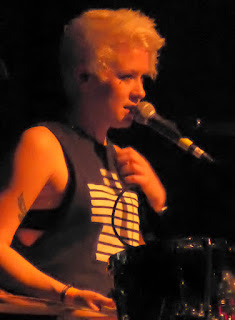 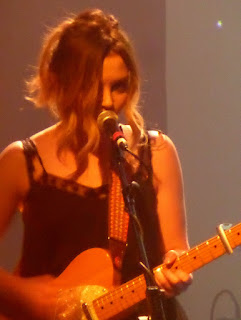 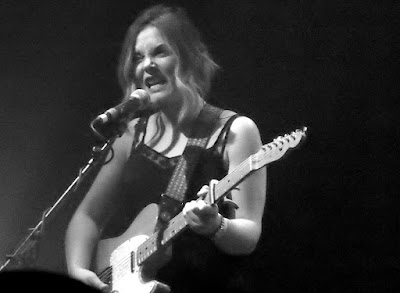 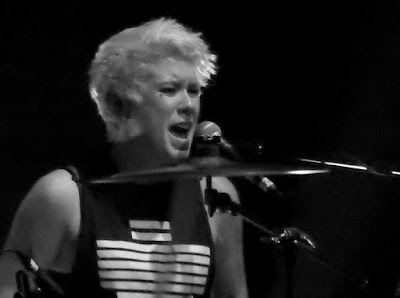 Yet another blisteringly good Pony Up, although if I had to make the Sophie's Choice between the two bands I would probably go with PINS. That is not to say I would not make the effort to recommend, or go to see again, either of these two bands. I most certainly would.