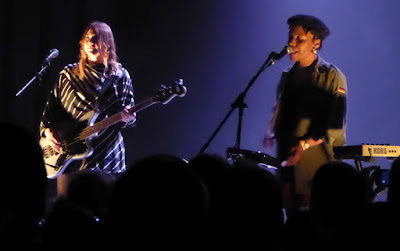 It is the last day of May, and I am at Norwich Arts Centre to see Sink Ya Teeth celebrate the launch of their new single 'If You See Me'. They recently signed to 1965 Records, and label-mates include Nadine Shah who played the Adnmas Spiegeltent in Norwich just over a week ago.

Sink Ya Teeth are Norwich musicians Maria Uzor (previously Girl in a Thunderbolt) and bass player Gemma Cullingford. Both are well known on the Norwich circuit, but it is since teaming up together that Maria's distinctive vocals and Gemma's intense bass playing  have sparked a chemical reaction of unstoppable force. They return to Norwich Arts Centre after supporting Californian dance-punk band !!! 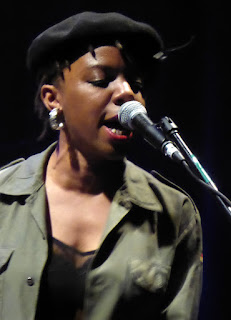 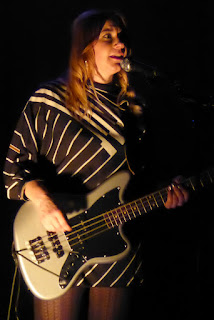 Those who remember Maria from her Girl in a Thunderbolt days will still recognise those stripped back beats, and vocals reminding you of Grace Jones but also of Nadine Shah as well. Now, with Gemma adding a pulsating bass, Sink Ya Teeth become the fusion of previous incarnations but with dance rhythms and synth lines intensified and distilled and reminding at times of Joy Division and electro-pop darlings Goldfrapp. This is music that grabs you by the throat but also makes you want to wrestle free and dance.

Highlight of the set is when Maria invites onto the stage friends who danced on the video for the single 'If You See Me'. There follows a glorious three minutes of freestyle movement behind the band's concentrated and obviously joyful performance. This is a triumph and the reward for Sink Ya Teeth - a huge crowd to welcome them home to Norwich Arts Centre, a record deal with a national label, and a debut single that sells out on vinyl even before the gig has ended.

The encore is a song called 'Substitutes', but the truth is already out there. There is no substitute for Sink Ya Teeth. 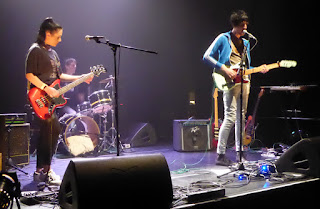 Support came from Painted Heathers, a three piece led by guitarist and vocalist Brandon Jacobs. This is the third time that I have seen the band, and I have always been impressed by Jacobs' playing, vocals and stage presence - a bit like Graham Coxon and Damon Albarn morphed into one multi-faceted persona. What has come on in leaps and bounds, though, are the contributions made by drummer James and bass guitarist Lauren. The threesome are now looking and feeling like a cohesive band, and their final track 'Messed Up' is a real climax, with the band walking off stage as guitar feedback continues to fight and force its way through to the speakers.