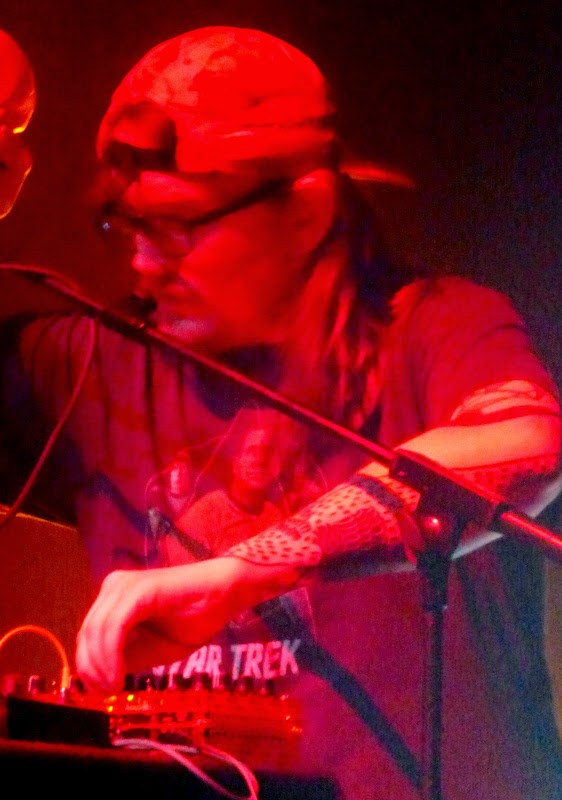 In the week when Uncle Melvin finally revealed the 10th Latitude Festival headliners, and we  collectively sucked in our breath to mumbled strains of 'Well, is that what we get for £200?', it is reassuring to see that it need not cost an arm and a chicken leg to watch exciting live music in Norwich.

Yes guys, on Friday at Norwich Arts Centre, for less than the cost of a KFC Zinger Meal, I managed to get first looks on Aldershot's bad boys 'Venus Lyx'; experience the best named band in the universe 'Let's Eat Grandma'; and twisted my melon man with the Rainbow Renegade himself  'Pop-Op' -  all on the same stage, and no wellington boots or trench foot required. 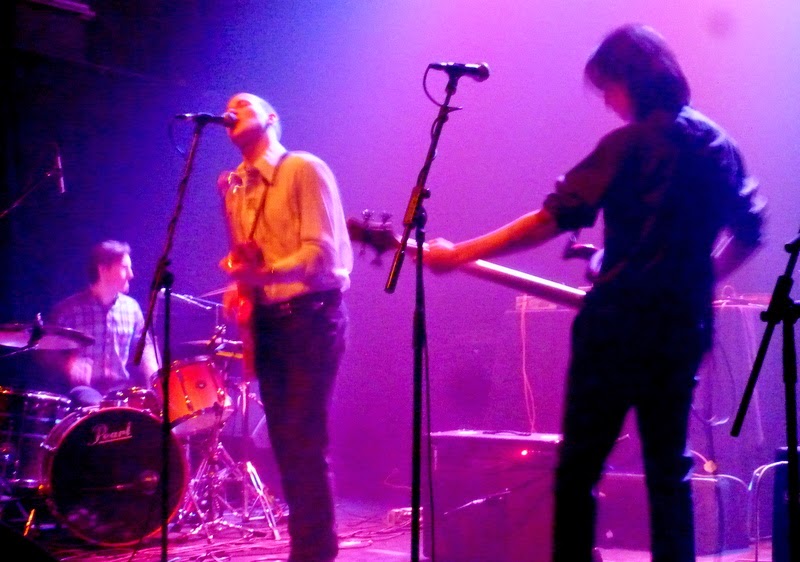 'Venus Lyx' were on stage first, taunting us for being so quiet. For a band whose debut single is allegedly about burning witches even a deconsecrated church can still invoke a little biblical wrath. Their aggressively chaotic vocals, menacing bass, and a lead guitar that persistently became detached from its whammy bar, were driven along by a drummer who clearly takes no prisoners. These guys look as though they know how to look after themselves. Having played and survived the squaddie bars of Aldershot, we must have appeared like a room full of pussies. This was proper nostalgic menacing rock and roll the like of which I have not felt since 1977. Joe Strummer would be proud of you. I loved them. 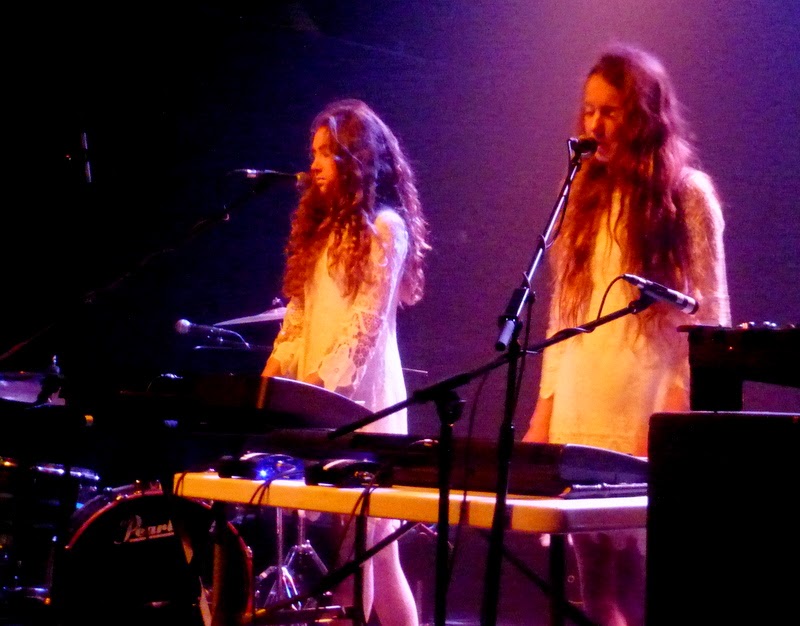 Next up are the kooky boho-chic duo that are 'Let's Eat Grandma'. These two have already whipped up a feeding frenzy of anticipation since appearing at Norwich Sound and Vision last October, and not without good reason. Whilst the live performance is still in its evolutionary state, the look and the attitude are already in place. The smart little synchronised moves that only come through knowing exactly what the other is thinking are dropped into their routines effortlessly, contriving a trance-like possession of dark forces at work. The girls switch instruments continuously, and as can be seen from their videos, they still have more up their sleeves. The songs blend spoken word, poetry, melody and an air of transcendentalism. Don't be fooled by the butter-wouldn't-melt innocence of their years. They have enough gothic tricks up their lacy sleeves to send us all to Hell. Fear and respect. 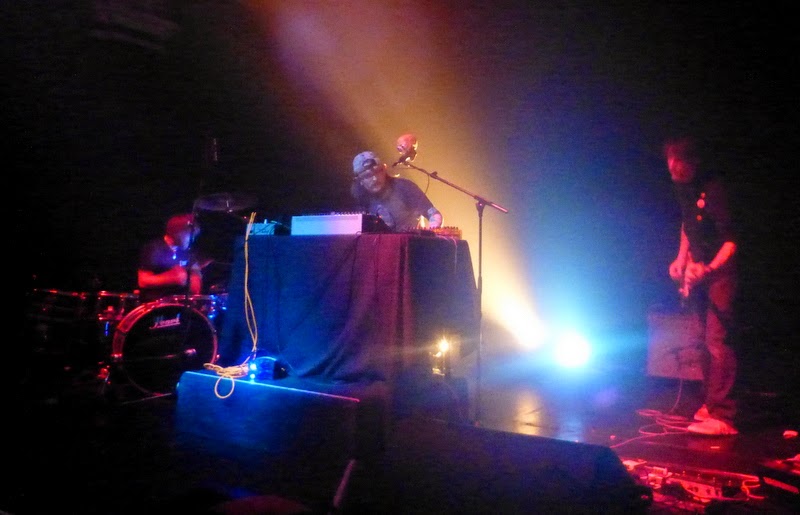 Last but not least is the analogue wavelength shifter and purveyor of lo-fi dance music that is Jay Barsby's alter ego Pop-Op. The last time I saw him perform was in a crowded bar at the Gravy Records album launch for BK and Dad, when I wallowed in his modulated rhythms and distorted vocals, and lusted after his jaunty skull microphone cover.

Tonight Pop-Op has de-camped to the main stage of the Arts Centre auditorium. He still has the trademark plastic skull, the wild hair and the baseball cap, but tonight he is flanked by a guitarist on one side and a drummer (who, it turns out, is none other than Pip from BK and Dad) on the other. The cumulative effect is a total assault on the eardrums, as if Royal Blood themselves had gatecrashed a Chemical Brothers set. The thing with Pop-Op is that he just does not let up from start to finish. There is no encore. How could there be? We are all reeling from the sonic blasting that we have just received.

Do not underestimate the Pop-Op. And don't be surprised if you wake up next morning with a stiff neck, and blood still trickling from your ears. And a plastic skull in your bed. 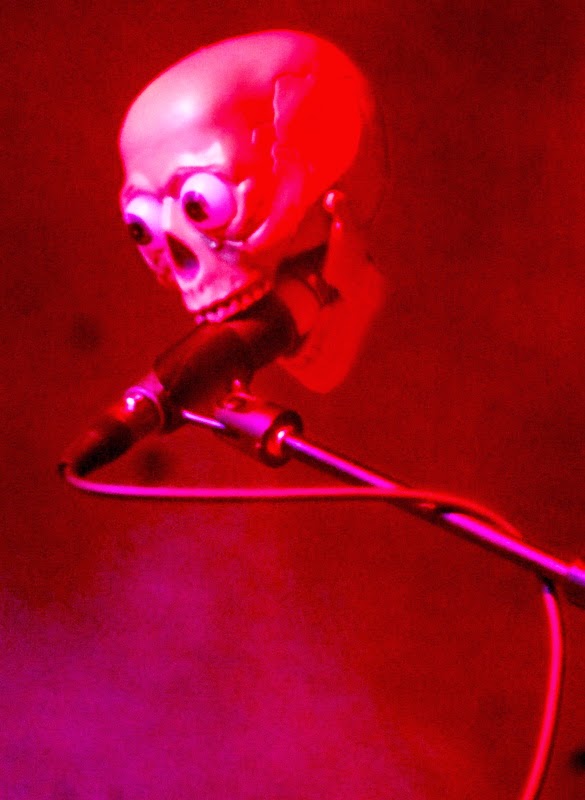