Seagulls or Eagles? No, it's the bloody Eagulls from Leeds 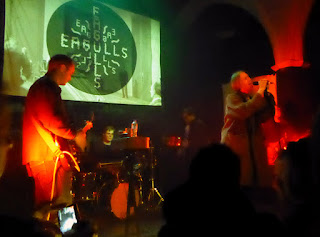 The story goes that at a drunken holiday camp karaoke the lyrics to a Shaggy number, Angel, mistakenly came out as  'Girl, you're my Eagle'. True or not, in 2010 four Leeds lads became Eagulls and started a band that took no prisoners when it came to media-bashing or shandy-drinking southerners. Their debut album is about to be followed by Ullages, and a short pre-launch tour calls in tonight at Norwich Arts Centre. There are three support acts. It's going to be a busy evening.

Leaning against the edge of the stage with just a guitar and sequencer, together with the biggest pedal and effects board this side of Ed Sheeran's lock-up, and all fed through a tiny amp on the auditorium floor, is Eagulls driver Stuart Smith, aka 99 Watts. Performing in a darkened hall with just two side spots providing illumination, a small crowd gathers, mesmerised by the ambient looped guitar sounds coming from this inauspicious performer. It sounds at times like a 21st century Mike Oldfield, but without the tubular bell distractions. Part improvised and part complex melody patterns, this is no 'wheels-on-the-tour-bus-go-round-and-round' indulgence, but an unexpected delight with which to start the evening.

By way of contrast, Soyuz Rats are a fearsome guitar and bass combination that knows no fear. Primal shouting and screaming makes way for a swirling crescendo of noise and effects that paint a dystopian landscape of Orwellian proportion. Their music could become the re-make soundtrack to '1984' or equally Gilliam's 'Brazil'. Intensely atmospheric, especially when bathed under blood-red spotlights, this felt as much a soundscape installation as it did a gig performance. And, they are from Norwich. Yay! 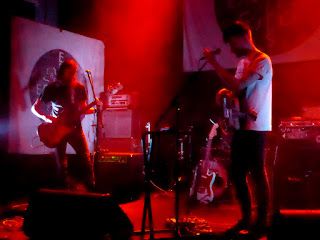 Flipping into yet another parallel universe came Brighton-based Fear of Men, commencing with lead singer Jessica Weiss performing underneath a white muslin shawl. There are immediately reminders of the first incarnation of School of Seven Bells, with a dreamy atmospheric vibe helped along with a rhythm of almost hypnotic proportion. The shawl is eventually discarded, and the mood progressively lightens like a sun rising over an Eastern horizon, until the auditorium is bathed in a gloriously warm ambience. I like these a lot. 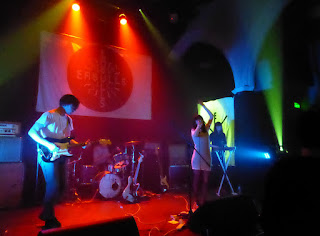 Eagulls created waves early on by being almost antagonistic to everyone and everything in the media residing south of Watford Gap, as if only gritty Northerners knew what it was like to be out of work and hungry. Not true, my friends, and with the imminent release of follow-up album Ullages they now appear more conciliatory to our non-clog wearing way of life.

Lead singer George Mitchell, complete with curtains-bob haircut and full length duffle coat, is now looking uber-cool, and whilst the rest of the band still look more like salesmen from the Hagley Road, Birmingham branch of GuitarGuitar than actual rock stars, one gets a sense that we may be witnessing an evolutionary progression in their outlook as well as their music. 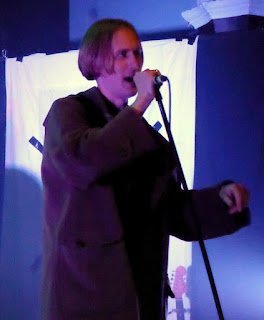 The playing is still as intense and aggressive before - new tracks like Euphoria and Blume leading the way after opener Lemontrees, but the original angst of Tough Luck, Yellow Eyes and Nerve Endings remind us of the anger that preceded. But whilst Mitchell moulds the delivery of the lyrics in a mix of Robert Smith disdain and Joe Strummer urgency, and struts around stage, the rest of the band are happy to keep to their marks and simply play their woollen socks off. The crowd are enthusiastic and react with some boisterous surging and embracing bonhomie. 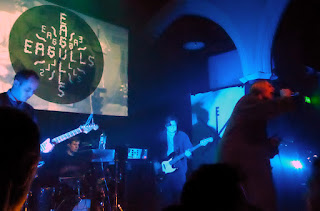 The entire performance is backdropped by a screening of the original version of Fritz Langer's Metropolis, overlaid with the band's bannered logo. Together with Mitchell's microphone enhanced effects from a small table-mounted tape-recorder in centre-stage, Eagulls are beginning to appear almost art-house in their dynamic. 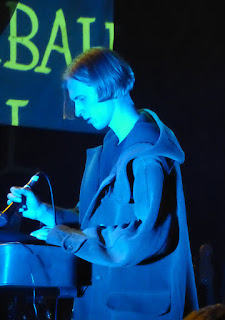 Who would have bloody thought it?

There is no encore. I'm not even sure if the planned set reaches its conclusion. It's half past eleven and a quick 'Good night' is followed by a swift exit and the houselights come up. Have we climaxed? Is this the two-fingered 'farewell, Norwich' ? Or is it simply that the plug has been pulled upon reaching the venue's curfew? We may never know. But we embraced the new Eagulls with all our Norfolk hearts.