Telegram, Warm Brains, and Painted Heathers at The Waterfront - Oh, and let's not forget the football either. 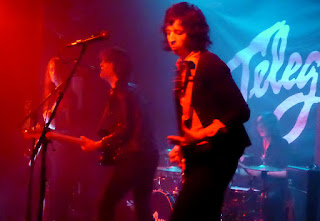 It has been something of a challenge to make it to The Waterfront tonight. I have had to forego a volunteer meeting for this year's Norfolk and Norwich Festival (mind you, I did manage to submit my online application form earlier in the day), and had to get myself over to Oak Street to finally collect my Piaggio scooter which had been in dry dock for the last two weeks having a new fuel injector fitted. Add to that the huge influx of traffic into the city for tonight's Premier League football clash between Norwich and Chelsea, and you can imagine the disruption to normal travelling times throughout the city.

Anyway, I've made it in time, got my scooter back (which has saved me the frustration of having to search for a car parking space close to King Street) and have arrived at The Waterfront with minutes to spare. And all because of a band I first saw at Festival No6 in Portmeirion two years ago. Telegram were one of a number of bands I saw for the first time that weekend, and was really impressed by their tight retro sound and their stage presence. It is perhaps surprising, therefore, that it has taken this long for a headlining tour and a debut album to follow.

Opening tonight is a local band who performed their first gig back in October of last year at Norwich Arts Centre. Painted Heathers consist of Brandon Jacobs on guitar and vocals, Lauren Rose Smith on bass, and James Lloyd Kerry on drums. Then, they were giving away demo CDs to the audience, tonight they are launching their debut single Little Steps. 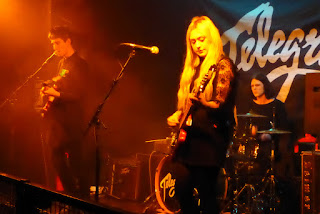 I liked them then and I still like them four months on. Brandon is clearly the driving force, and the most accomplished musician of the three. He looks a little bit like a young Terry Hall, and the music has that same 90's feel - melodically in the same camp as Colourfield but with a far riffier guitar sound. Lauren plays bass well within her capabilities and James keeps the pace steady. It all sounds good, although at times it would be nice to just crank the tempo up a notch, although this is still only gig number three. Watch these grow and flourish.

Now I'm not much of an offal eater, and I have to admit that Warm Brains came across as a bit of a budget dish. Frontman Rory Atwell gives good value for money with some effective guitar work and rock and roll posturing. He is still remembered from his time with Test Icicles, and has since turned his hand to engineering and producing with artists like Palma Violets and Yuck, as well as tonight's headliners. However, tonight his own vocals sound at times a little flat, and whilst his colleagues may not look quite as Camden High Road as he does, they definitely make a valid contribution to the band's energy. With an album to promote, and track titles like Languid Tarmac kick-starting our imagination, Warm Brains may well appeal to those dining off the trendier musical specials boards. For the meantime though, I prefer mine chilled or piping hot. And, lets not forget, we have our own Teen Brains to tickle our taste buds in Norwich. 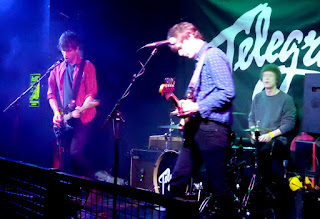 Now, whether it was the glorious autumnal sunshine of 2014 Festival No6 that put me in such a receptive mood for new bands, or the magical setting of Portmeirion village, or simply the copious quantities of local ale, but Telegram tonight failed to ignite for me like they did that weekend. Which, for a band that has only just released their debut album Operator, comes as a bit of a surprise. Perhaps, in re-working the songs just a little too much prior to the recording process, they have lost some of their initial charisma. I remember them drawing proudly in influence and style from the glam-era, and serving up a seventies musical bouillabaise - their were fine lumps of Bolan, Bowie and Roxy Music floating around in a swirling cauldron of guitars and Chinnichap beats, yet they had their own identity and contribution to add by way of seasoning.

Now, the roles seem to have reversed, and their own ingredients are fighting for domination in a watery minestrone of tribute band pastiche. Only the Bowie cover, Heroes, saved it for me tonight, despite the leather jacketed coolness of vocalist Matt Saunders. The remainder of the set, although tight and played with gusto, never regained the previous ground lost. In striding out to become contemporary they have in actual fact shuffled several steps back. Sadly, they may have discarded the very thing that made them initially sound so fresh. Ironic for a band that has named themselves after a means of communication that today's audience may not have even heard of, let alone used. 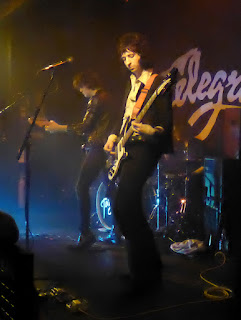 And, as if that wasn't bad enough, Norwich City lost  their football game as well. 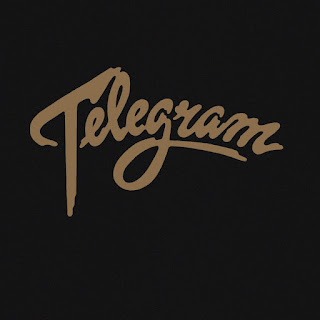