A large helping of Sweetbeats please, and a side order of Lobster 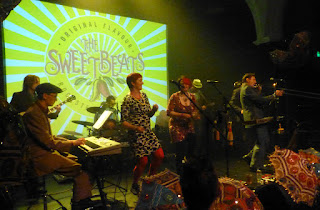 What is it with this part of the country's fascination with ska and reggae music? We must have one of the smallest indigenous Afro-Caribbean communities in the UK, and yet we have historically always loved the sound of Jamaica, going back to when I was at school in Lowestoft in the seventies, when one's degree of 'coolness' was measured in part by the amount of Trojan in your record collection.

The answer undoubtedly comes down to the sheer danceability of ska music, which manifests itself in many forms, from full-on skanking to a gentler chilled-out and more soulful varietal which has come to be tagged as 'Rocksteady'.

Two of today's Norfolk bands that can be almost guaranteed to sell out wherever they play locally are heavily influenced by Ska and reggae. One is the sweaty, laddish collective that goes by the name of Killamonjambo. The other is an 8-piece combo that have been a staple fixture of the Norwich scene since 2003 - The Sweetbeats.

I am at Norwich Arts Centre on a Saturday night in October, not only to lose my Sweetbeat virginity, but also to compare and contrast the local legends with a young group of funk and jazz inspired upstarts that are creating their own scene, and are supporting here at the NAC tonight - Lobster.

I have seen Lobster play several times over the last twelve months, and what I love about them is their unashamed love of 80's and 90's funk and soul, combined with an ability to build and blend onto a platform of jazz, samba and rock. Molly Holdom's vocal performance is restrained, and often understated, but complements perfectly Dom Trevor's energetic and conductorial sax playing, with which he holds together their movable feast of young talent focused around a core of eight players. Whilst I applaud their enthusiasm for what they do, and the large young following that they bring to every gig, they do sometimes run the risk of becoming slightly self-indulgent during a support slot. But, hey, that's show business. The world, literally, is your stage. Go grab it. 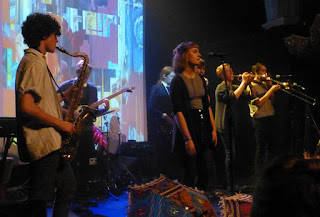 The Sweetbeats are every bit as professional and slickly presented as I expected. Their up-front duo of Saffron Paffron and Sophie Fox have the energy and panache that you would expect from an experienced outfit. The moves are slickly choreographed, and the set is proudly proclaimed by trombonist 'Professor Bonestawm' as being proudly '52% Sweetbeats original material'. The stage has been given a wonderful Autumnal feel with a makeover of Oriental parasols, and the outfits project an authentic 70's vibe.

The entire set is a wonderful homage to the decades of my youth and an opportunity to dance and immerse myself within a slickly presented 'Ronseal - does exactly what it says on the tin' experience. A ska version of Donna Summer's 'I Feel Love' shows that they are certainly not afraid to leave the box, let alone think outside of it. 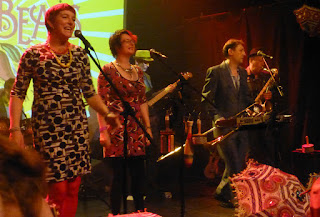 As for comparing and contrasting - Sweetbeats win it hands down. Their entire stage show, from projections and stage-dressing to individual costume choices, demonstrates a production based on professionalism, experience and expertise. The slickness and synchrony that comes from hard work and practise has, and will continue to, fuel The Sweetbeats' shows. But, Lobster have the energy and dynamism that gives them the opportunity to continue on that forward trajectory to who knows where. Either collectively, or individually, those crustacean claws have the talent to clamber beyond the rock-pool of Norfolk.