Girls Names on a Sunday - Well Worth Remembering 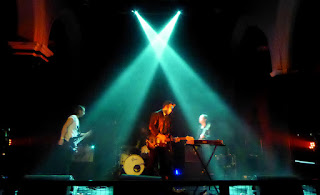 I very nearly didn't make it to Norwich Arts Centre last night to catch Belfast band Girls Names' return to Norfolk (they played at Epic Studios about eighteen months ago). After a lunchtime session in Cromer, followed by bidding the son and his wife a bon voyage back to Hampshire, it would have been so easy for me to merely curl up on the sofa in the company of a glass of wine and a DVD. With the glorious benefit of hindsight, and having since been totally blown away by Girls Band, I am now gratified that I made that supreme effort to grab a coat and get myself down to St Benedicts Street for what has become my 'gig of the year' so far.

To be honest, the motivating force and deciding factor for my coming out was probably the presence of Norwich punk renegades Dog's Dinner as opening support. A band that is still exploring and identifying their own abilities and direction, this was the third set I have seen them play and their confidence and maturity is blossoming triffid-like as singer Josh, along with Tom, Tod and Jacob, achieved a reactionary yet moody stage presence enhanced under a blanket of blood-red lights. This is post-punk pop balanced with youthful awareness that is refreshingly poised ready to fight back at consumerism and the establishment. If you are looking for a local band to adopt as your own personal 'next big thing' you won't go far wrong by claiming the Dog's Dinner as your own. 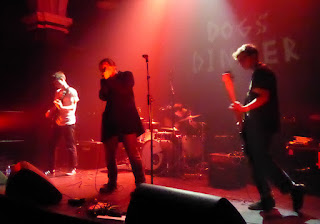 Gross Net - I'm really sorry, Phil but I should have done my homework and realised that you are also the man that makes the tortured guitars come to life within Girls Names. When you walked onto the stage at Norwich Arts Centre, kick-started the sequencer and start singing I initially sucked in a lungful of air and braced myself for thirty minutes of self-indulgence. How wrong I was.

Philip Quinn is indeed none other than the talented guitarist with tonight's headline band, and Gross Net is his side project / alter-ego. Once he picks up the guitar and begins to coalesce with, and gradually overwhelm, the programmed track, I realise that we are setting off on an entirely different trajectory. With Nick Cave looks and growling neo-Teutonic vocals, his performance assumes a life of its own with the guitar's soaring dynamics and intricate layering before being cast aside again for a barrier-defying communion amidst the audience, bringing the set full-circle yet introducing an intimacy that contrasted dramatically with the isolated figure that initially greeted us on stage. Crescendo-like tracks, screaming vocals and great atmospherics all leave me gasping for more. 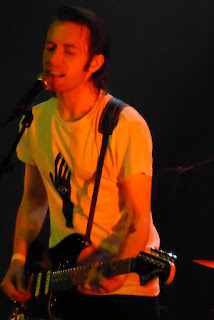 When Girls Names do take the stage Quinn's cover is blown for those who were not already in on the secret, but it is now the turn of Cathal Cully to take centre stage on  guitar, Korg and vocals. Quinn retreats physically to stage left but maintains an indomitable sonic presence. Gib Cassidy takes up drums to provide a consistent and marauding beat that anchors both guitar parts firmly together and Claire Miskimmin provides the most dynamic bass playing that I have experienced in ages. At times she pulls out riffs the like of which take me back to the very early Stranglers albums. 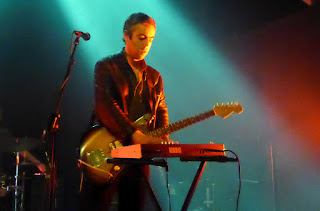 The cumulative effect is a blistering assault on the eardrums, and even the Norwich Arts Centre 's usually muted stage lights are breaking out into sporadic outbursts of funneled strobing. We are on a psyched-out journey through the industrial landscapes of Bowie's Berlin and New Order's Movement, whilst combining energies and atmospherics reminiscent of Cooper Temple Clause from the first throes of the 21st century. This is a musical representation of Europeanism which somehow seems wholly apt for reminding us of the fight against growing nationalism. Girls Names are vibrant proof of the individual powers harnessed and unleashed through symbiosis and collaboration. 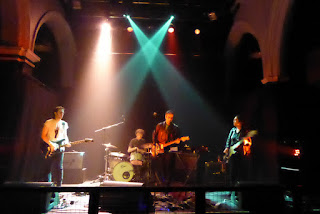 This is also an example of how a band's stage performance is capable of taking on a life of its own, extrapolating itself beyond the realm of the studio tracks. This is a throwback to a bygone age when the live performances defined a band's reputation. Girls Names are brimming with live creativity, weaving their material into a co-operative cacophony that blows away the cobwebs of the day, leaving a glorious rock and roll glow in the soul as we leave the venue and make our way home. A rare quality, but one that is wholly welcomed. 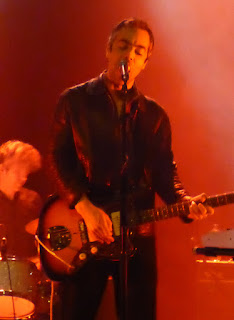 So thank you to Dog's Dinner, not only for another great set, but acting as the impetus that tipped the scales and got me out here tonight. I owe you guys one! 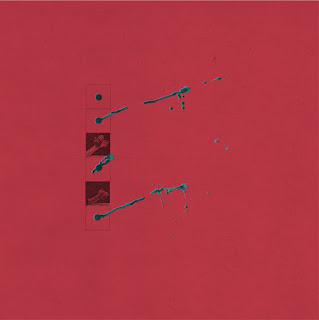