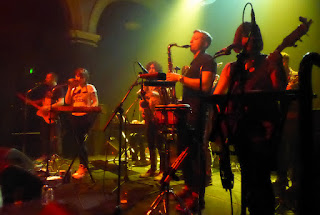 Well it's a trick. You don't actually need to re-arrange them, but it would probably only make sense as a headline had you already known the following :-

1) ''Rope Store' is the name of a popular contemporary yet retro-infused band based in Norwich,

2) 'Pony-Up' is the name of a regularly promoted music night at Norwich Arts Centre featuring exciting new bands and artists, and with very reasonably priced admission.

3) A 'single' is what bands would release in the days before i-Tunes, MP3, and Spotify. It was a 7" vinyl record with one song on each side. Sometimes a second, or even third, single would precede the release of the 'album' -  up to six songs on each side of a 12" vinyl record. Nowadays any new song receiving extended promotion or enhanced radio play can be referred to as a single without need for any form of physical product to be made available for purchase.

So, if you put the three together, you would understand that we had 'Rope Store' appearing at a 'Pony-Up' night on Saturday to launch their follow-up single. And yes, as they are a retro-influenced band, they do still release 7" vinyl records. Simples.

But, because this is a 'Pony-Up', we still have two support acts to enjoy before 'Rope Store' take the stage. 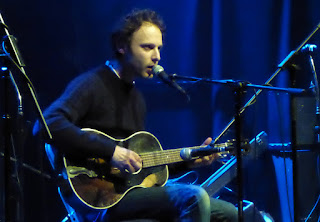 First up is the very formal-sounding Mr. David Viner who sits on a chair and sings, whilst at the same time playing an acoustic guitar. He was originally spotted back in 2003 whilst selling merchandise for The Von Bondies. Their front-man, Jason Stollsteimer, heard his songs and signed him to his own record label. His songs appear to cover the darker side of life, like love, death and drinking, so when his song for Valentines's Day is introduced as 'I Love You', we have already worked out that it will probably cover death and drinking as well. It is. It's actually called 'I'd Love to Kill You'.Seriously though - David Viner's songs have a dark wit and lyricism that holds our attention for the full thirty minute set. Nick Cave meets Jake Thackeray. 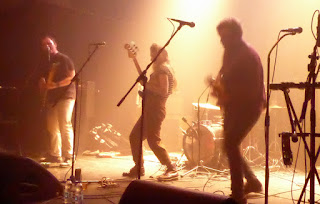 Essex band Superglu have already played at Norwich Arts Centre on several occasions over the last year, and we love their energy and enthusiasm. They've even bought along a Go-pro camera to record tonight's audience and performance, but haven't worked out how to make it work. It doesn't spoil our enjoyment one iota, and there is also a big new backdrop featuring the new logo and colourway. Their best known song Diving Bell is saved for last, but new song Latvians is showcased alongside tracks from their EP Horse. 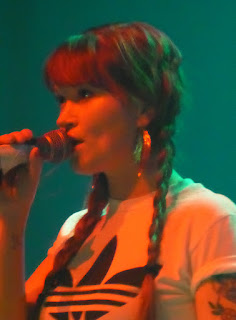 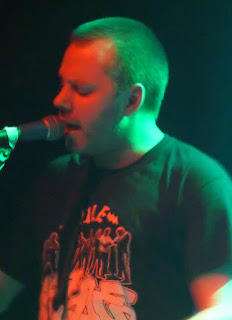 Rope Store have again played Norwich Arts Centre before in the last year, as well as gigs at The Murderers and an initial single launch at The Brickmakers last December for All of You ( http://www.outlineonline.co.uk/music/live-reviews/rope-store-b2 ). They write all their own material, and take inspiration from everything retro from the Shangri-Las to Style Council. And they release proper singles on proper vinyl, which they record themselves on analogue equipment in their own studio. How's about that then pop-pickers? Not 'arf.

Tonight's launch is for That's Not Good Enough and even if the pressing plant again have again failed to deliver the goods in time for the launch, Jason, Gemma and the band run through another magical set that takes inspiration from the sixties, seventies and eighties. Dominic and Ciarán from local funk jazz and soul collective Lobster join in for the second half of the set, adding even more richness and depth with the extra saxophone and trombone added into the mix. 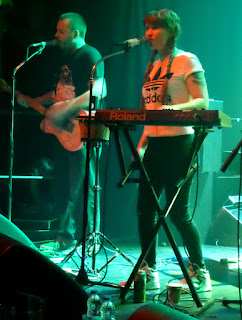 So, even if we couldn't buy either of their singles (at least it gives us time to save up for a record player) we can at least troop through into the café-bar of the Norwich Arts Centre and let Jason entertain us on the decks until it's time to go home.