Don't Faint - It's Laura Marling at The Waterfront 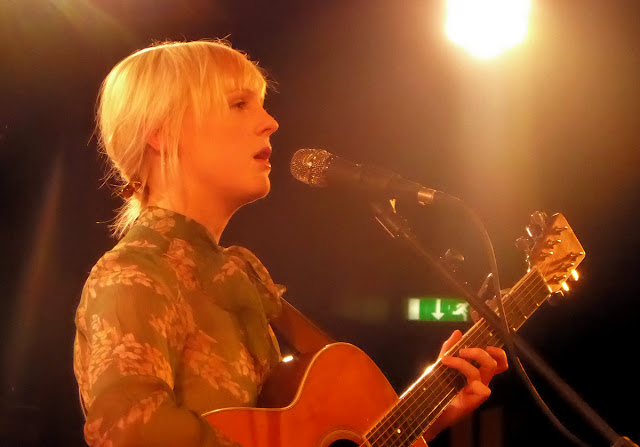 Almost the first thing that Laura Marling comments on is the temperature inside the Norwich Waterfront. 'Isn't it warm in here?', she quips, before adding, 'At the last gig, in Exeter, four people fainted. I didn't know what to do, so I just sang louder whilst they carried them out'. She goes on to implore that we all drink plenty of water, and proceeds to check on our well being throughout the set.

No disrespect to The Waterfront, but many folk round here were surprised when Laura Marling announced that she would be playing here as part of a short tour prior to playing a month of dates throughout Canada and the United States. The ceiling is low and those iron pillars mean that anyone more than two or three rows back is required to align themselves carefully, as well as avoid standing behind a tall person. And even if you do achieve a direct view of the stage you will in all probability only manage a head and shoulders view of the band. No, The Waterfront may be a great venue for dancing and moshing, or for listening, but not necessarily the fans' choice for actually seeing the act.
If a good view was a priority, then you might have been better off booking seats at The Apex, a few miles down the road at Bury St Edmunds, just six days earlier. However, for those lucky enough to get through the doors in time to claim those coveted best positions this was a rare chance to enjoy Ms Marling up close and personal, and performing a solo set which included material from the recently released Semper Femina. 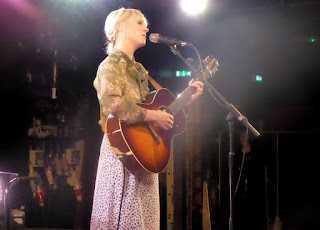 As she picks a guitar from the three already tuned up and waiting on their stands, she launches into Wild Fire, the third track off Semper Femina, and we know that we are in for a Jeckel and Hyde roller coaster of a ride in Marling's fair hands. For someone who exudes such an outward impression of sweetness and light - she always introduces herself to audiences with a cheerful  'Hello, I'm Laura', there are some deep and soul-searching questions being raised about relationships and the nature of friendship. Nouel continues in this exact same vein before we switch to the earlier Goodbye England Covered In Snow, about running away from a relationship. Even though we know these songs, the sheer power of hearing them sung unaccompanied and with such passion is strangely unsettling, albeit in an intensely good way.

And so we continue. Other songs from I Speak Because I Can are intertwined with tracks from A Creature I Don't Know, Once I Was An Eagle, and another couple from Semper Femina. Marling even deviates from her own setlist when she chooses to perform Paul Simon's Kathy's Song instead of her recent cover of choice, Leonard Cohen's Avalanche. Oddly, the one song that gets a proper introduction is Daisy, from the Short Movie album. The Daisy in question is Daisy-May Hudson, who Marling refers to as 'Amazing Daisy'. We are urged to seek out and watch 'Half Way', the crowd-funded documentary that Hudson made after her family were forced to move into a hostel within a former army barracks after being made homeless when their landlord decided to sell their flat.

Daisy also turns out to be the penultimate song of the evening. Marling reminds us that she does not do encores, so Rambling Man becomes her final song, after which she leaves the stage and the house lights come on. Throughout the entire set the audience have been rapt. Mobile phones have been conspicuous by their absence, and I feel almost awkward when I take the camera from my pocket to snatch a couple of discrete photographs. This has, without doubt, been one of the most special gigs that I have attended for several years. Even those who had to stand further back are raving about it. I just consider myself very privileged to have been able to have witnessed the whole show from the front row. Laura Marling is a true star, and the most powerful and beguiling force to see live. 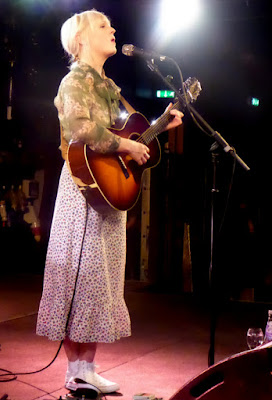 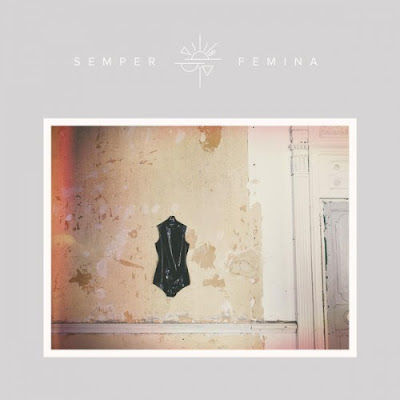